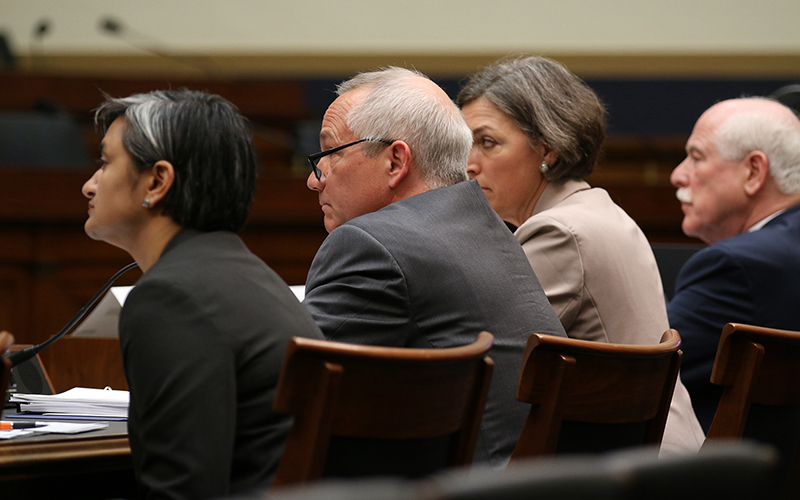 The remarks at the House Judiciary subcommittee hearing on “Restoring Enforcement of our Nation’s Immigration Laws” came one day after Attorney General Jeff Sessions said sanctuary cities would lose federal funds if they continued to ignore immigration laws.

Democrats on the panel criticized the talk about cracking down on sanctuary cities, saying “strong-arming” cities into cooperating with federal immigration agencies is unconstitutional and would reduce public safety by making undocumented immigrants afraid to report crimes.

But Republican members of the Immigration and Border Security Subcommittee said something has to be done to strengthen U.S. immigration enforcement that was “systematically dismantled” under President Barack Obama.

“The Trump administration inherited a shell of immigration enforcement that it must now rebuild,” said Rep. Jim Sensenbrenner, R-Wisconsin, the subcommittee chairman. “The time is long overdue to ensure that our immigration laws are enforced and the rule of law is truly restored.”

Many Republicans were like Rep. Andy Biggs, R-Gilbert, who pointed to the 2015 murder of Grant Ronnebeck, 21, a convenience store clerk shot by an undocumented immigrant over a pack of cigarettes.

Biggs told the committee that loose immigration enforcement resulted in the release of 3,600 convicted immigrants in Maricopa County over a 15-month period.

“We know they were criminally violent because they had been in the system charged and convicted of crimes,” Biggs said. “And yet they were released without being deported.”

An angry Rep. Luis Gutierrez, D-Illinois, said that arguments against sanctuary cities focus on “demonization” of immigrant communities. Those calling for the federal government to punish sanctuary cities look to gain political points, Gutierrez said, rather than really solving the immigration issue.

Other immigration advocates testified that a crackdown on immigration will not make cities safer, as Republicans claim, but has had the opposite effect.

Archi Pyati, the chief of policy and programs for the Tahirih Justice Center, testified that President Donald Trump’s January executive order on immigration has had a “devastating chilling effect” on immigrants reporting crimes.

That order calls for local police to cooperate with federal agencies, sharing intelligence on undocumented immigrants in their communities and holding immigrants arrested on other charge until they can be picked up by Immigration and Customs Enforcement.

The order is supposed to decrease crime by giving ICE better access to the “on-the-ground” intelligence on criminal immigrants that local jurisdictions have. Instead, Pyati said, it has created a barrier between local police and undocumented immigrants who now hesitate to report crimes for fear of deportation.

She said that without that trust, police will not get accurate information about crime in their jurisdictions and will hear less frequently about crimes that are going on.

But other witnesses, like Jessica Vaughan, said that “for the sake of public safety,” the government should increase its use of expedited removal, utilize local detention more often – and take action against sanctuary cities that refuse to cooperate with these measures.

That may require more than just withholding federal funds, said Vaughan, who is director of policy studies at the Center for Immigration Studies.

“In some cases, there are going to be die-hard sanctuary jurisdictions that want to keep their policies anyway, despite the lack of funding,” Vaughan said. “I think that for the sake of public safety the Department of Justice is going to have to take legal actions against those jurisdictions – potentially seeking an injunction.”

But Pyati said that aggressive enforcement will only continue to chip away at the “community trust policies” needed to make communities safe. Without that trust, she said, police will not get accurate information about crime in their jurisdictions and will hear less frequently about crimes that are going on.

Pyati called it a tragedy when any U.S. citizen is killed by undocumented immigrants, but said that sanctuary policies are not to blame.

“It’s much easier to pick out the one or two crimes we have seen across America and really shine the light on those than it is to really weigh the benefit of these community trust policies,” she said.

She added that local law enforcers have limited resources.

“Immigration laws should be enforced by the federal government,” Pyati said. “Not by our local police.”