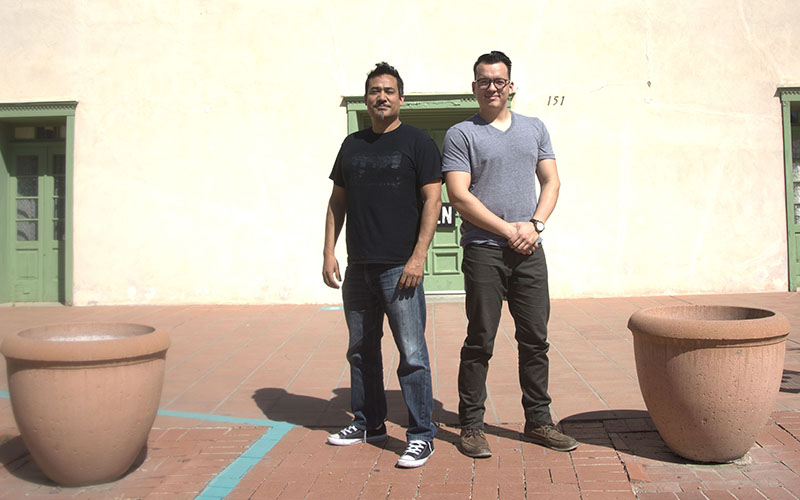 Marc Pinate (left) and Andy Gonzales stand in front of the Sosa-Carrillo-Frémont House in Tucson. Pinate and Gonzales work at Borderlands Theater, which resides in the historic building. (Photo by Ryan Santistevan/Cronkite News)

For Borderlands Theater, the house represents more than just a bigger office space. (It moved from a smaller location in February). It also represents the history of the area.

Marc Pinate, producing artistic director, musician, and actor at Borderlands Theater, said the company produced a play about the historical neighborhood, the first Mexican enclave in Tucson. When homes were bulldozed to make room for the convention center, he said, families were displaced to the west and south sides of town.

“This house has a lot of significance for the local community here,” he said. “This was a symbol of a Mexican-American community and a symbol of resilience.”

For three decades, the theater has focused on border stories in the Southwest. Pinate said this extends to a metaphoric or symbolic border, including topics such as women’s rights and LGBTQ issues.

“The community really came out and stood up for us,” Ortiz said. “A lot of the time, our actors put in a lot of extra work for us and to have them donate to us, it’s like thank you. Wow!”

Ortiz said his troupe serves as an entrée to theater for many Tucson residents. She and Pinate, her husband, both work at Pima Community College. They introduce Pima student actors to the theater. Pinate works at the University of Arizona and exposes his students to theater as well.

Borderlands Theater company resides in the Sosa-Carrillo-Frémont House in Tucson. Borderlands prides itself on bringing live theater to the residents of Tucson. (Photo by Ryan Santistevan/Cronkite News)

“We wake up and we are working,” Ortiz said. “It’s great. Never in my wildest dreams would I think I’d be co-running a theater company in Tucson of all places, but it’s really awesome.

Funds are low because the company relies heavily on grants. Its campaign page says that last November the company wasn’t awarded a major National Endowment for the Arts grant, forcing it to make up the $20,000 deficit it faced.

Pinate said running a theater company can be expensive. He compared ticket prices to those at Arizona Theater Company, which charges up to $50 per ticket.

“We could charge for everything, but we feel theater is like bread: it should be for everyone regardless of financial status,” Pinate said. By charging more, he added “It would really undermine our desire to bring theater to every kind of person in the Tucson area.”

Borderlands Theater does its best to keep ticket prices affordable. It’s important to the board that it make theater available to the community. Opening night tickets for adults are $26. Regular performance adult tickets are $23.50, student tickets are $14, and senior tickets are $19.50.

A premium flex pass is $89 and includes priority seating on opening night events. The standard flex pass of $69 does not include the opening night package. Both passes are for five tickets, either for each production or to bring another person. 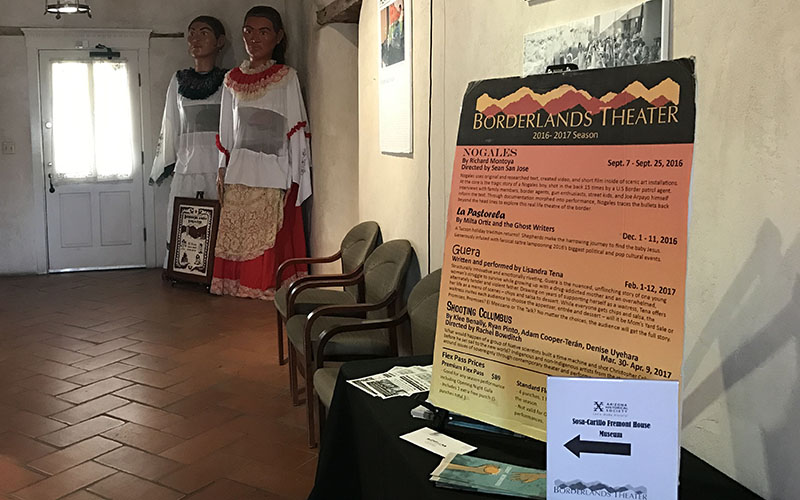 The 2016-2017 season featured plays such as “Nogales,” by Richard Montoya; “La Pastorela,” by Ortiz; and the “Ghost Writers” and “Guera,” written and performed by Lisandra Tena.

Never in the history of Borderlands Theater has it actually owned its personal theater. For the past two seasons shows have been performed at the Temple of Music and Art cabaret space in Tucson’s historic downtown.

Borderland Theater’s mission, as stated on its website, is to champion “the development and production of new plays while producing plays by established playwrights whose work resonates with the diversity of our audiences.”

The company partners with regional organizations to foster cultural, geographic and ethnic diversity in its productions.

Ortiz said last season the company sold out of all of its performance. She said this season they haven’t sold out every show, but more than half of the season has been sold out, which is generally the case.

The last production of the season, “Shooting Columbus,” is free for indigenous people. The producer is Rachel Bowditch, an Arizona State University professor.

One contributor, Adelita Grijalva, said she donated $50 through the campaign page. Those who saw her share the posts ended up contributing a total of $500.

Grijalva said Borderlands has been an institution in Tucson for decades. She said it provides theater that speaks to the area and it is something the community can’t afford to lose.

“They provide a huge community service, access to theater to a lot of people that may not be able to go otherwise,” she said.