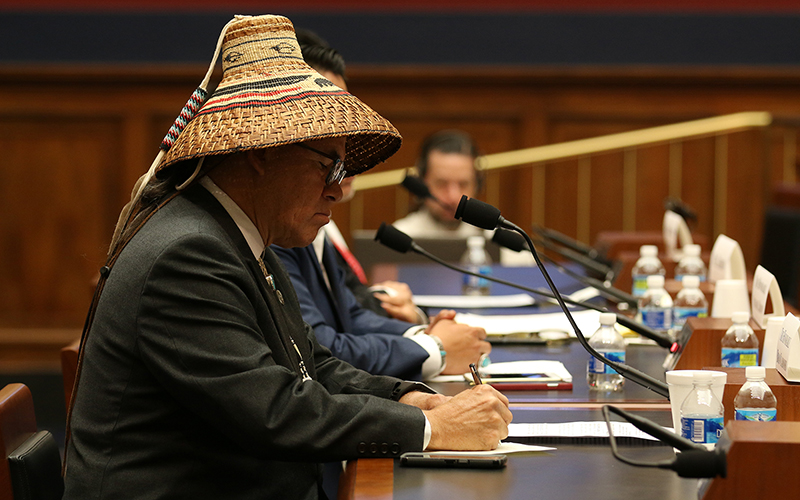 National Congress of American Indians President Brian Cladoosby told a House panel that a bill to exempt tribal governments from federal labor oversight would only give them the same rights that every other state or local government has. (Photo by Dustin Quiroz/Cronkite News)

WASHINGTON – Tribal leaders called on Congress Wednesday to exempt their governments and government-run businesses from oversight by the National Labor Relations Board, a right they said is enjoyed by every other government in the country.

Navajo Nation Council Delegate Nathaniel Brown and others told a House Education and the Workforce subcommittee that the Tribal Labor Sovereignty Act of 2017 would treat tribes as the self-governing entities when it comes to handling labor-related issues.

“What this bill does is it will give the nation the parity that we want,” Brown said after the hearing. “It will strengthen who we are as a sovereign Indian nation.”

But critics of the bill said it would remove any protections tribal workers might have, by letting tribes freeze out labor unions and leaving workers nowhere to turn for help.

John Gribbon, political director of the labor union UNITE HERE, said that exempting tribes from the National Labor Relations Act and taking them out from under NLRB oversight could open the door to “harassment and other forms of discrimination.” He called protections of the labor act “absolutely a bare minimum.”

“My argument is, and my argument would be … that workers deserve better rights than they receive in this country,” Gribbon told the subcommittee. “Whether they be on Indian lands or not, that workers have been harassed and abused.”

The bill would amend the NLRA by adding “any Indian tribe, or any enterprise or institution owned and operated by an Indian tribe and located on its Indian lands” to the list of federal, state and local governments that are not subject to NLRB oversight.

The bill is a response to a 2004 NLRB decision to hear an unfair labor practices case at a casino on Native American land in California. That reversed that tribal officials said was 70 years of precedent, during which they had been exempt from board review.

Gribbon stressed that the board has insisted it will deal only with labor questions and will not interfere with “internal tribal government matters.”

That was challenged by National Congress of American Indians President Brian Cladoosby, who said that forcing tribal governments to abide by regulations meant for commercial businesses is a formula for “destabilizing any government” and influencing internal government affairs.

“Unlike private businesses, no government can shut down its enterprise operations because of labor disputes,” Cladoosby said during his testimony.

Brown rejected claims by critics that the bill only aims to block unions.

The main sponsor of the bill – which is being co-sponsored by Rep. Paul Gosar, R-Prescott – said it addresses a simple question.

“Do we think that our Native American leaders are any less legitimate … than our state and local leaders?” asked Rep. Todd Rokita R-Indiana.

That argument was stressed by tribal witnesses, who said labor matters are sovereign issues that they are capable of handling, as they are a “mirror to the federal government.”

“Within the judicial, we do have a court system, we have our labor relations office and we also have the Navajo Nation labor laws that protect our people,” Brown said.

Making tribal governments subject to the NLRB takes away that right to govern themselves, witnesses said. Cladoosby asked the lawmakers to consider what might happen if the state or local government in their districts had the same thing happen.

“You have governments in your district and if those governments were treated differently by the NLRA, you would hear it loud and clear,” he said.

Rokita said that for him it boils down to that question of sovereignty.

“Our Native American partners, our brothers and sisters, are either sovereign or their not, and where do we stand?” Rokita asked.