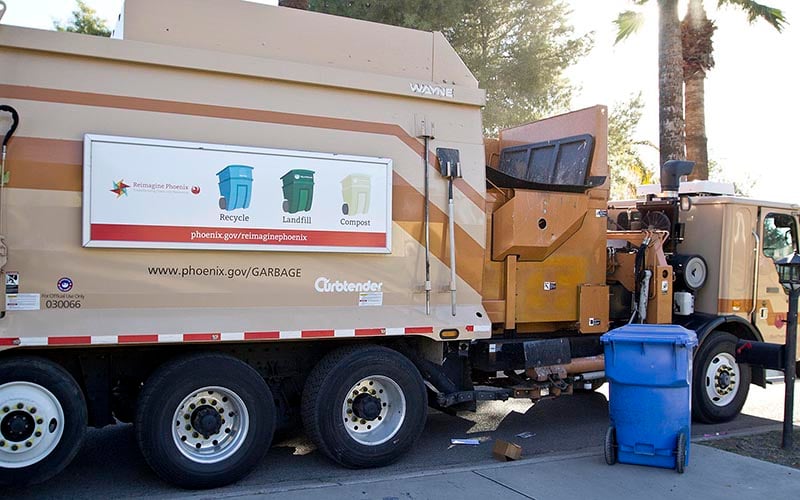 PHOENIX – An app that tracks a garbage truck’s route in real time and bins that help users better separate trash from recyclables are among potential inventions vying for a $20,000 trash award.

Cisco IoT Technologies and the Arizona Institute for Digital Progress are collaborating with the city on a contest asking inventors to find solutions to reduce landfills to zero waste by 2050.

About 40 teams or individuals are competing for an April 13 win that could be invested into a sustainability startup.

Here’s a look at two of the teams:

The solutions the team is offering would identify what kind of trash should be thrown away or recycled and help customers find out exactly what time the garbage truck will pull up to the curb in front of their home.

The customer would snap a photo of different kinds of garbage, such as a glass bottle, and use the app find out information such as how to properly dispose of it. Information could include an educational section “to help people figure out how to recycle properly,” Steinheiser said.

The app also would allow users to get live updates and notifications on arrival times for garbage pickup. No more wondering whether a customer missed pickup time – reportedly one of the most common complaints. Steinheiser said an added incentive might be having users “get some points you can redeem for a membership at YMCA” if they consistently get the bin to the curb on time.

The team has high hopes for their creation. “Mobile application is a hub for all things trash,” Salama said. 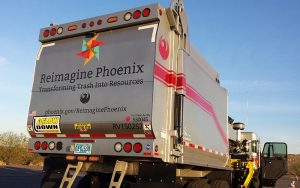 An individual or team can apply to win a contest that will award the winner $20,000. (Photo courtesy of Phoenix Public Works Department)

“You have to build something that is viable. It doesn’t necessarily have to be complete. It has to be a solution,” said group member Nayan Seth.

Their solution: “Ensure people put the right stuff in the right trash can.”

Seth, Kaylan Juluru, Nikhil Meka, and Nikhil Vementala, who also are ASU computer science students, are working on a plan to make the garbage separating process more efficient and fun.

They plan to develop recycling and trash bins equipped with cameras and monitors. As garbage is thrown in, the monitor will show whether the user is placing the garbage into the right bin.

“Cameras will capture what has been thrown and it will recognize, using Google or Facebook, API whether it is recyclable waste or a solid waste,” Seth said. API refers to specific processing tools that software programs need to function.

The team hopes it will ease a burden for plant workers who have to divide trash into different categories.

“If the waste is segregated at the disposal level itself, different types of recycling methods can be applied according to the waste type which helps us to convert some waste into something useful,” Juluru said.