The Arizona Corporation Commission, which regulates utilities, held the hearing in preparation for a vote in the coming months. The proposed hike would raise monthly bills by about $6 a month for a typical user.

APS serves more than two million customers, according to its website, and provides power to people in 11 out of the state’s 15 counties.

Doris Freeman, an APS customer for 40 years, said she’s been opposed to every rate increase APS has proposed.

“APS is incredibly wealthy … and they treat their customers terribly,” Freeman said. “They cut my service off. I was working two low-wage jobs, until I could find a better job, and I was getting behind on bills. I was $30 short on my bill, and they refused to work with me, and they cut my service.” 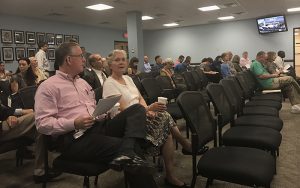 The Arizona Corporation Commission on Wednesday held a public hearing about a proposed Arizona Public Service rate hike that would raise monthly bills by about $6 a month for a typical user. (Photo by Lahela Maxwell/Cronkite News)

In January, the company proposed an increase that would work out to $11 a month for a typical customer, according to azcentral.com. The company sought to increase revenue by $166 million.

In early March, APS and other groups settled on a compromise and lowered its requested increase.

Wednesday’s meeting was the second public hearing on the issue. The commission has a third hearing planned for Yuma in April.

Commissioner Bob Burns expressed disappointment the commission did not plan meetings for Flagstaff because residents there had asked for a hearing.

One woman noted that her energy consumption had gone down almost a third, but her bill increased by the same amount.

At one point, Freeman questioned the relationship between the commissioners and APS.

“This is not how this works. There is no back and forth,” Commission Tom Farese said.

Patti Sills-Trausch, the director of outreach at the Franciscan Renewal Center in Scottsdale, spoke on behalf of herself and the people her nonprofit serves.

“We know through working with them, that when utilities go up, they have to make a difficult choice – between utilities, food, between paying their rent,” Sills-Trausch said. “When these things happen, they come to us for more help.”

The APS proposal would increase monthly service fees, alter the rate for peak usage and lower compensation rates for excess energy produced by solar panels, among other things.

The Franciscan Renewal Center also has solar, and she fears the changes could affect them if they add more panels.

“We’re trying to do the right thing for the environment,” Sills-Trausch said. “These kinds of changes to the incentives will affect our ability to install more panels … (and) where we can save money, we can pour that back into our programs.”

“This proposal will create a loss of control for customers,” she said. “These provisions are unjustified.”
An APS spokeswoman said the increase will help the company meet customer needs.

“The last time we had a formal review was five years ago,” spokeswoman Anna Stewart said in an email statement. “Our proposed rate increase and modernized pricing model are necessary to support new technologies while maintaining safe and reliable energy customers expect.”

The Corporation Commission is set to vote on the rate increase this summer.