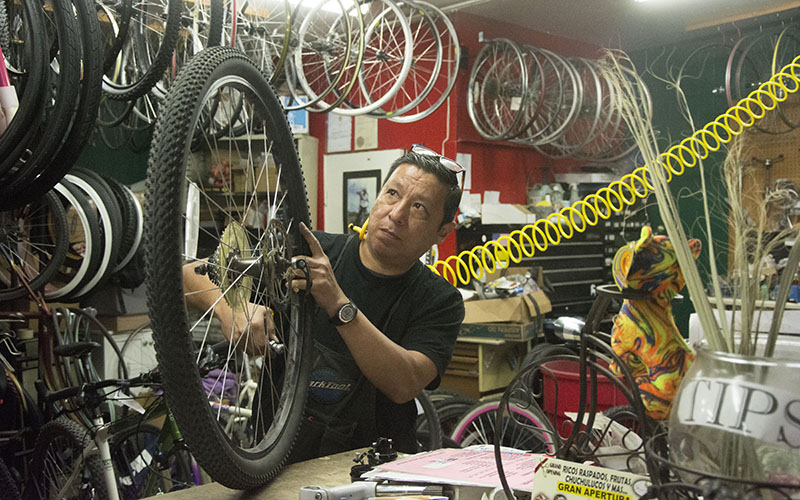 The Garage Bike Shop owner Rene Pulido fills a tire with air at the shop. A mainstay at the Mercado in the town of Guadalupe, the shop closed at the end of February. (Photo by Ryan Santistevan/Cronkite News) 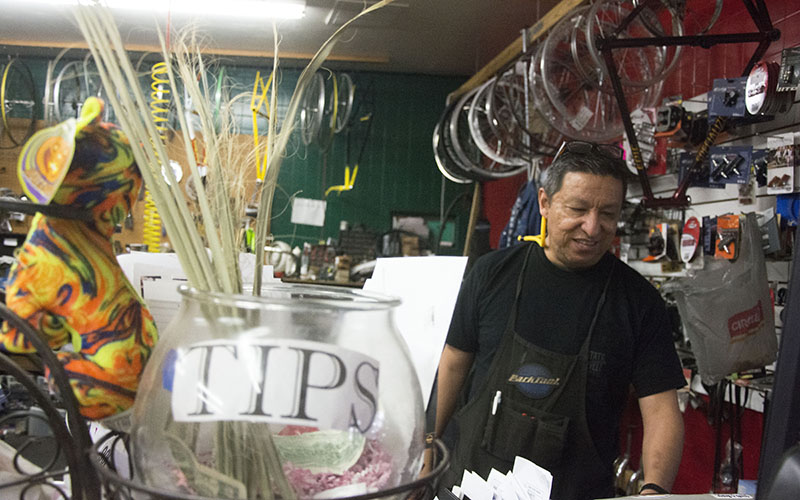 Rene Pulido, 51, has eight years of memories running The Garage Bike Shop in the heart of Guadalupe. He closed it at the end of February as rental rates forced him to shutter it. (Photo by Ryan Santistevan/Cronkite News)

GUADALUPE – For eight years, the residents of this town relied on a soft-spoken and friendly shop owner when it came to repairing their bicycles.

His prices were low. He was engaging. His business filled one of the retail spots in the popular Mercado in the heart of town.

Richard Navarrette, 43, has lived in Guadalupe his entire life and said since Rene Pulido, the owner of The Garage Bike Shop came to town, he has walked into or by the shop each day.

“He brings revenue inside (Guadalupe),” Navarrette said. “When the business brings in people to the town, it helps everyone’s business.”

That all changed the end of February when Pulido, 51, closed the doors to his shop for the last time.

With rent increasing the past couple of years, he found he could not remain in his current location as a small business owner. He said he tried to negotiate a better price but he had no success.

He fears the restaurant that opened next to his former location in the shopping plaza may end up like others businesses which lasted just a year or two before closing because of the rent prices.

“I don’t want to close but I have no choice,” Pulido said. “This is what I do to feed my family … As long as I am able to put food on the table, I’m happy.”

When his shop was open, Pulido said he did not employ anyone other than his immediate family. He ran the used-bike shop with his wife, Audrey. His children, Rosa, Max, and David, also pitched in. The exception was Navarrette.

Navarrette could be seen near the shop each day, even on Sundays when it was closed.

“I keep an eye out for him,” he said. “I’m going to miss him because I’m not going to have a job now … I can understand, though. It’s business.”

In early February, Pulido broke the news on his Facebook page that The Garage Bike Shop would close its doors officially on Feb. 23, but that he would still provide services from his home for his regular customers.

“For eight years, we have been located in the heart of Guadalupe and have truly lived the American dream,” he wrote in a Facebook post. “Our search for another property in the East Valley did not go well and the quest continues as we speak.”

Pulido could have raised the prices for his services and bicycles, but opted for affordable prices because he said he appreciates his customers. He said he would rather have people come back after paying a lower price than to never see them again.

He described his customers as drops of water: “If they kept coming back they would fill a bigger jar and it would feel more worth it.”

Pulido said he and his family will remain in the bike business. He said he landed a job at Adventure Bicycle Company in Mesa with hopes of opening his own shop again in the future.

The Garage Bike Shop opened its doors almost two decades ago after Pulido was left with two choices at 19 when his dream of becoming a professional soccer player in Mexico didn’t pan out: he could go to work, or he could further his education.

He went to work. After immigrating from Mexico to California, he found work at a bike shop, where his passion for the business geared up.

“My brother-in-law got me a job,” Pulido recalled. “At first I couldn’t fix a bike by myself, but I remember the day when I did it by myself. It felt amazing.”

He moved to Arizona in 2009 and opened his own business in Guadalupe, a community of about 6,000 residents south of Tempe. He called it The Garage Bike Shop. He said the name derived from his time in California, where he started working on bikes during his free time in his own garage.

At the time, he said, he had a friend with a bike company who had asked him why he hadn’t opened an account with the company. Pulido in turn opened one and got a dealer license and had to name his shop.

“I didn’t want to name it after my last name like he suggested,” Pulido said. “I said, ‘I’m the garage dude, just put The Garage Bike Shop.’”

In 2014, Pulido gained U.S. citizenship in Arizona. He does not flaunt the fact that he’s a U.S. citizen. Quite the contrary; he is grateful for the benefits it provides. He even refers to his citizenship day as his second birthday.

“Everyone has the same opportunities,” he said. “If you want everything, go grab it. It’s yours. It wasn’t any different for me.”

Pulido said he chose to open his shop in Guadalupe when rental rates were relatively low. Pulido said rent at the Mercado was $400 a month when he started the business. It rose to $950 by 2014. He moved a block over and rent jumped to $1,200 a month. At the time he closed the shop, rent had increased to $1,500. That was more than he could pay and still stay in business.

On average, Pulido said he can complete the service of a bike within 24 hours, unless the repair is more complex than a tire change — his most common repair.

When Pulido was not working at the shop, he was playing in a 48-and-over soccer league or selling at bike swaps, events where a community of bike vendors, collectors, and enthusiasts meet to trade and sell bikes, merchandise, and parts.

Pulido said he averaged about 60 to 80 customers a week seeking his services. He said weekends were his busiest. The goal was if someone came in they at least had to buy one item. However, he said he only sells items that his customers need.

“I don’t want 1,000 customers and they don’t buy anything,” Pulido said. “Sometimes they want to buy something, but I will say, ‘No, you buy only that.’ I want to be completely honest.”

One of his friends and customers said that Pulido’s prices were too low at times. Ahwatukee resident Tad Fagerholm, 51, said Pulido made a huge impact on the community.

“Guadalupe depends on him, he’s their transportation guy,” Fagerholm said. “A lot of people ride bikes here. In Tempe, a lot of the ASU students come in here looking for fixes or whatever mechanic. People rely on him big time.”

He said the prices at The Garage Bike Shop were very affordable. He said one time Pulido tried to give him something for free but he put money in his tip jar instead.

Pulido has a positive mindset and said he believes in his goals. He owned the business and was technically his own boss, but said he wanted his customers to believe they were the boss. These customers eventually became regulars.

“They pay me and I do it,” he said. “Sometimes they will take over my computer and show me something. Other times when the phone is ringing and I can’t get it, I’ll tell them to pick it up.”

That’s one bell that won’t be ringing in Guadalupe anymore.