Trump message the same, but Arizona conservatives still like hearing it

President Donald Trump gives a thumb-up to supporters before his speech Friday at the Conservative Political Action Conference. The speech hit familiar themes, which was just fine with the enthusiastic audience. (Photo by Kevin Lamarque/Reuters) 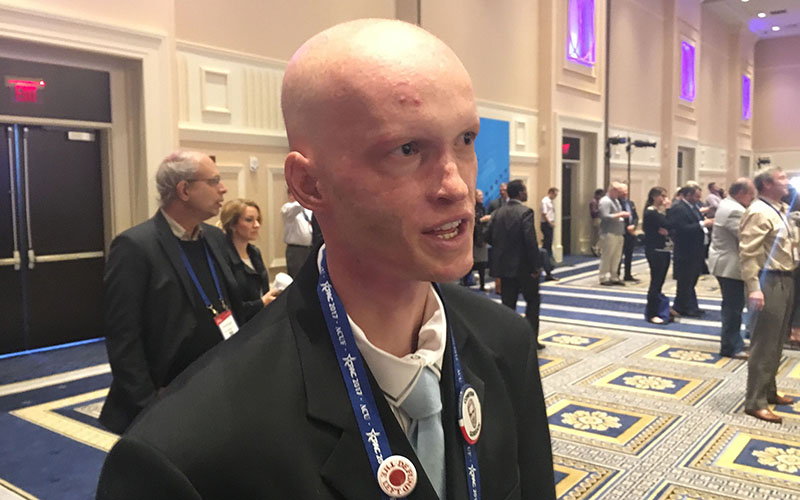 Arizona State University student David Lattimer was one of thousands of students at the Conservative Political Action Conference. Lattimer thinks Trump, like Reagan, has energized young people to get involved in politics. (Photo by Alexis Egeland/Cronkite News) 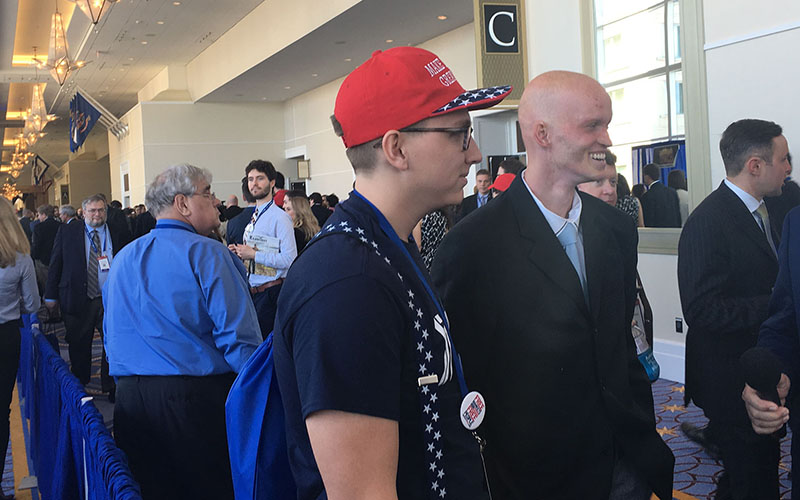 FORT WASHINGTON, Md. – If President Donald Trump was looking for a welcoming crowd, he found it Friday at the 2017 Conservative Political Action Conference.

“It’s exciting,” said Mitchell Manley, 18, a student at Scottsdale Preparatory Academy and one of those who packed the ballroom to cheer on Trump, the first president to speak at the annual convention since President Ronald Reagan did so in 1981.

It had the feel of a campaign rally, with the crowd breaking into chants of “U.S.A., U.S.A.” and “lock her up.” Trump’s speech hit on familiar themes, attacking the “fake news” media, renewing his get-tough immigration promises, including building a border wall, and defending the Second Amendment – and the crowd ate it up.

If there were concerns about the direction Trump is taking the conservative movement, they were not obvious Friday.

“It’s definitely different, and it’s exciting,” Manley said. “I’m excited for the construction of the border wall and the repairing of the travel ban. I like the changes that he’s made and that he’s going to introduce.”

David Lattimer, 21, the vice president of Turning Point USA at Arizona State University, admitted Friday that he was not always sure about Trump, but those doubts have been put aside. He said he thinks Trump’s election brought on a “Reagan-type era of young people getting energized for politics.”

That was reflected in the crowd, which leaned young: Convention organizers said they expect that around half of the more than 9,000 people registered are students.

Manley said he has always been involved in politics, so he was excited to see the 2016 election bring out more of his generation – on both sides of the political spectrum.

“I think it got a lot of people involved in politics from both sides, liberal and conservative, and both types of people are very fired up about these issues,” he said. “These discussions that are being had are healthy, and they need to be had, as long as they remain healthy and civil.”

Former Arizona state Sen. Kelli Ward, a vocal supporter of Trump’s during her unsuccessful attempt to unseat Sen. John McCain last year, said she thinks the president brought people to the polls that don’t usually come out. Those voters seem to be forming a new, unique political party, she said.

“I think that a lot of people who voted for Donald Trump are not Republicans or Democrats, they are in the ‘Trump Party,'” Ward said. “It’s still being defined, but I think it’s much more conservative than it is liberal, that’s for sure.”

Lattimer cited Trump’s populism for that unusual grouping of followers and made an atypical comparison to the strategy of another president: George W. Bush.

“Bush had a modern approach,” Lattimer said. “It may not have been a great approach, but it was modern, and that got him a second term.”

Like Bush, who shook things up and got re-elected, Lattimer sees the same for Trump.

Trump shook the Washington establishment in his first month with a flurry of executive orders and presidential memoranda, despite having both chambers of Congress firmly in Republican hands. While they agreed with the goals of those orders – targeting immigration, federal hiring, regulations, Obamacare and more – the number of executive actions gave some Trump supporters pause.

“I think that executive orders are necessary when they need to be, but the way that he’s gone about this, with so many executive orders in such a short amount of time, is a little bit unnecessary,” Manley said. “His ego is massive and I feel like he thinks he can just do whatever he wants to do.”

Even though he was too young to vote in last year’s election, this is not the first CPAC convention for Manley. The longtime Trump supporter was here last year, only to see Trump cancel at the last minute, while much of the rest of the crowded Republican field showed up.

“For a minute after CPAC last year, I was sort of anti-Trump because I felt like if he wanted to win over the conservatives, he should have at least come to CPAC,” Manley said Friday. “The excuse that he gave about him being too controversial of a candidate for last year’s CPAC, I felt was a little bit unnecessary and not really what he should have said.”

But Manley’s disappointment was short-lived.

“Right now I’m definitely with Trump,” he said. “I’ve been with Trump for a long time, and I’m excited to see where he takes us.”