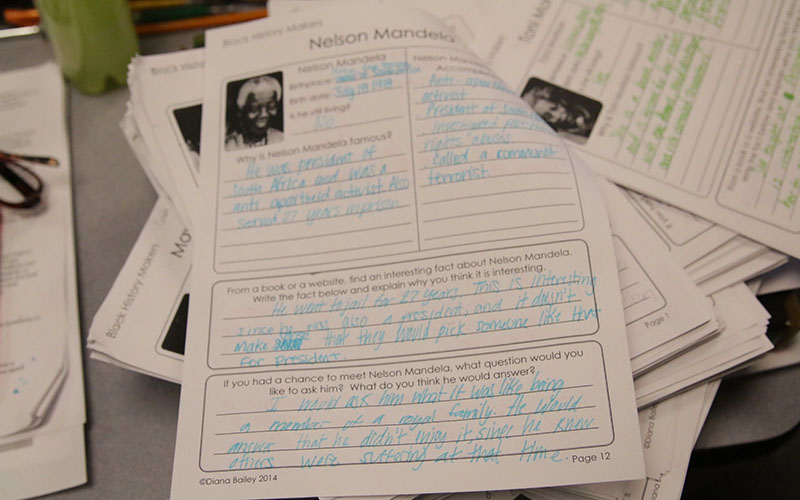 Information about notable Black leaders like Nelson Mandela were handed out to Heather Robinson’s eighth-grade social studies class. Students were asked why someone was intriguing or what they would do if they met the person. (Photo by Kaddie Stephens/Cronkite News) 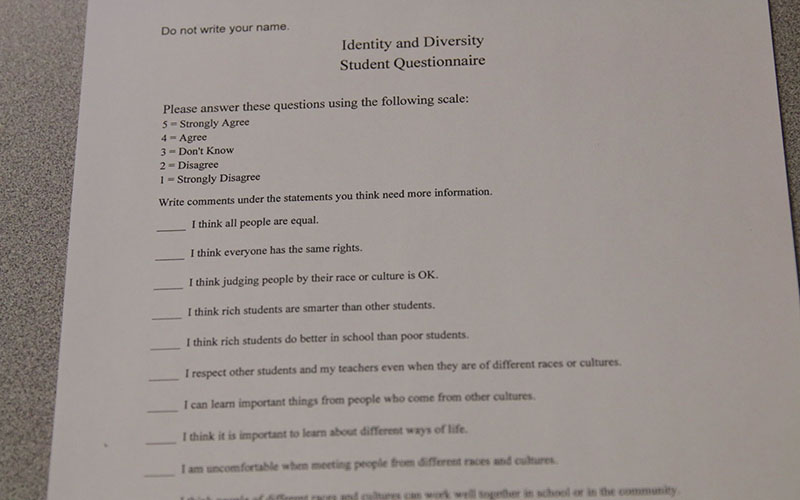 Teacher Heather Robinson passed out anonymous questionnaires to her students about race, equality and fariness. (Photo by Kaddie Stephens/Cronkite News)

Students in Heather Robinson’s eighth-grade social studies class at Desert Canyon Middle School were, perhaps for the first time in their lives, experiencing segregation during an exercise Robinson called the “Illusion of Race.” Whether students got the good lollipops or the less-desired candy depended on what month they were born, a way to demonstrate rewards that were based on random privilege rather than fairness.

Robinson taught the lesson during Black History Month to show her students the foundation of segregation is receiving unequal treatment for things people have no control over, such as skin color.

“Sure, we have our own lollipops,” Leblanc said. “But even if you have some privileges, if they’re not the same as what everyone else has it makes you upset.”

Besides the lollipop exercise, Robinson handed out information on notable African Americans, including Frederick Douglass, Barack Obama and Oprah, and distributed anonymous surveys on equality and racism.

“I absolutely incorporate Black History Month into my curriculum,” Robinson said. “It corresponds with the Civil Rights Movement we will be studying fourth quarter, and I’ll spend a lot of time on kids’ personal feelings about race and recognizing issues, as well as the history behind it.”

Robinson said it’s crucial to teach history and cultural diversity to today’s students, no matter their experience, background or ethnicity. Desert Canyon is part of Scottsdale Unified School District, which serves about 24,000 students, according to their website. Niche, which provides demographic and academic information on schools, estimates about 3.7 percent of enrolled students are African American.

“It’s important to study Black History Month because people need to be exposed and know about other people who are different than them and about other cultures,” Leblanc said.

Caleb Kaufman, who was also part of Leblanc’s group, said the lollipop exercise was effective because it was hands-on and taught them what it felt like to not be equal, and believes that “all cultures should be celebrated.”

Robinson asked the students who received the good lollipops if they would give up their position to their fellow classmates.

Jett Church acknowledged he had doubts.

“It felt good because you’re getting the better privilege, but I do feel bad for the other students,” Church said. “I probably would’ve kept my spot in my group, though.”

On the other side of town, in a school district with an African American enrollment more than four times that of the Scottsdale Unified School District, a Laveen school teaches Black History Month to students in different ways.

Natalie Urick, a sixth-grade teacher, said the Ice Cold Souljahs focused on dancing in their first visit but shifted to a more information and history-based presentation the second time.

“The first day was the ‘amp them up’ and give them the background of performances and the dancing itself, before diving into subjects such as Jim Crow Laws during the second session,” Urick said.

“I’ve never seen them so engaged, and it was every single person,” Urick said. “It was so cool to see the high school students really get engaged with our middle school and younger ones.”

The assemblies were the idea of a local parent and reading instructor at South Mountain High School.

“The assembly opened up with with a poem on the Black Lives Matter movement that the author expressed through dance,” said Jessica Epacs, Vista Del Sur principal. “It was extremely moving.”

Two students shared their experience at the National Museum of African American History and Culture in Washington, D.C. and a group of seventh and eighth graders read poems they wrote about Jim Crow laws and the Civil Rights Movement.

Epacs said that during one assembly, one of the student presenters said that our minds are like a parachute, and that we can only use them properly when they are open.

“That really stuck with me,” Epacs said. “I think it’s really important for us to be culturally aware, and we are a very diverse campus, so black history is just one facet of us. I think knowledge is power and I think the more you know, the more open and more sensitive you can be to others.”

The school incorporates black history beyond February, through presentations and a cultural-awareness club.

Urick said learning black history is vital to students of every race.

“I feel very strongly about it not just being one month,” she said. “We need to not only be culturally aware but culturally accepting” about Black History Month. “It’s very empowering for the Asians in the room, for the Hispanics in the room, and it’s empowering for all cultures and opens a door for having that true acceptance of other people and tolerance of other people, and building those race relations for other students.”