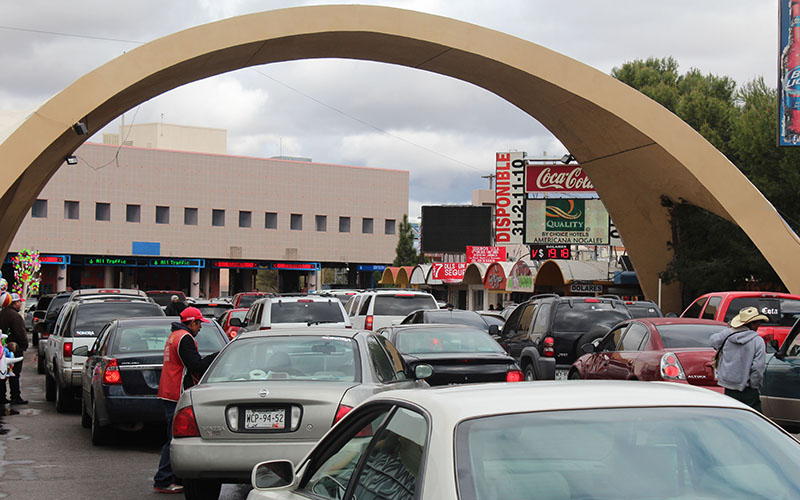 The streets are full of local businesses that attract newcomers, but dozens of independent vendors go car to car to their clients rather than waiting for clients to come to them. The vendors sell merchandise that ranges from traditional Mexican candies to ornate shot glass stands to large ceramic figures of the Virgin of Guadalupe.

Fausto Pérez has made a living selling candy and food at the border crossing for more than 20 years. With a small basket hanging from his neck, Pérez arrives at the border inspection station at 10 every morning, he said. He offers his customers a variety of traditional Mexican candies which he buys in neighboring Hermosillo.

Sergio Lazano hands out free newspaper early during the day when crossing lines are shorter in Nogales, Sonora Mexico Port of Entry to the U.S. (Photo by Charlene Santiago/ Cronkite News)

Pérez is well-known among locals who regularly cross the international border. Alfonso León from Rio Rico, Ariz., 15 miles from here, is one of Perez’s regular customers. As different street vendors pass by, León asks for Pérez.

“I’ve been crossing for a few years now to visit my family and Fausto is always here,” said León, who works in Arizona but has family here.

Juan González is another long-time vendor who is known for selling fresh “nopales,” or cactus. For more than 25 years, González has been going to the port of entry to sell bags of nopales to drivers and passengers at the crossing. Gonzalez said although he doesn’t work every day, he tries to sell as much as he can.

He arrives early in the morning and sets his tools and ingredients by the Plaza de las Palomas, located in front of the port of entry. There he arranges his wares, places his wood-cutting board, and prepares the nopales for his customers. González puts them in a small bag and then sells them for 122 pesos, equivalent to $6.

“Although we all sell our separate products, we’re all partners and we’ve known each other for a very long time,” González said in Spanish as he prepared to head towards prospective customer waiting in the long lines.

Every day he and fellow vendors like Jorge “Machaca” Gil, also a full-time vendor famous for selling fresh “machaca” meat, gather by the plaza. They meet to talk and take breaks from their long shifts at the international border. 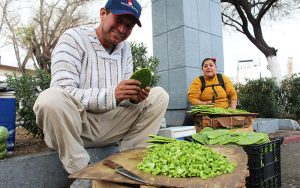 According to Gonzalez, the street vendors chose the location because it guarantees customers.

“There’s always going to be a line here,” González said. Each day more than 9,000 people cross the Nogales Port of Entry, according to the U.S. Bureau of Transportation.

Other vendors like Pérez agreed customers are always available, but he said sales can be inconsistent. This challenges vendors’ reliability on sales at the checkpoint.

“Some days I’ll have more sales than others, you never really know how your day will go, which is why I come here every day,” Pérez said in Spanish.

For singer José Guadalupe Esquer, drivers waiting to cross to the U.S aren’t just customers. He says he thinks of them as his audience. Better known as “El Bronco Negro de la Sierra,” Guadalupe Esquer considers the international border “checkpoint” his stage.

A guitar, his voice, and his lyrics have allowed him to engage with his audience at the border the past 10 years.

“I entertain my audience; I bring joy to children; I serve my Lord; and I bring happiness to humanity,” he said. “I make a living playing and singing. If they give me a peso good, and if they don’t that’s OK, too,” Guadalupe Esquer said in Spanish.

Arizona native David Strathman came across Guadalupe Esquer as he waited in line in his car. Strathman, who visited Nogales for the first time, said Guadalupe Esquer caught his attention because he was the only person singing. 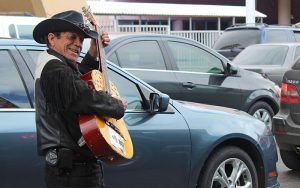 “I was drawn to his personality and his energy,” Strathman said.

According to the law, each person must have a street vendor permit approved by the Department of License and Inspections Office in the City of Nogales, Sonora. The license must be renewed monthly. Fees vary depending on the product being sold. According to officials, monthly fees range from 85 pesos ($4.27) to 168 pesos ($8.43).

Street vendors are prevalent at other crossing stations along the Arizona-Mexico border. The Nogales, Sonora, port of entry is the busiest of the six non-commercial crossing stations in the region. In 2015 it accounted for 40 percent of Arizona’s total border crossing to and from Mexico, according to the Bureau of Transportation’s most recent report.

The average wait time at border crossings ranges from 45 minutes to an hour during the weekends and 30 minutes during weekdays. The DeConcini Port of Entry has eight lanes for personal vehicles crossings that could be simultaneously used.

As the day wears on and the lines get longer, more vendors, including young kids, make their way to the streets of Mexico’s Federal Highway 15 to hawk their trade. Jesus Velázquez, 12, with two other friends, make their way through the cars. They take turns cleaning windows, hoping drivers will pay them a few coins.

“I do it just to get some extra money for food,” Velázquez said.

Another long day ends for the border vendors.