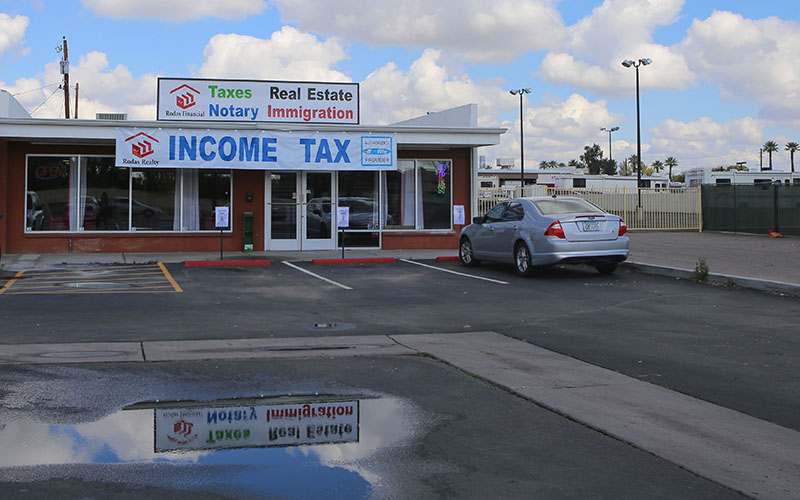 PHOENIX — President Donald Trump’s election and immigration executive orders have led to an increase in the number of immigrants seeking legal advice and assistance in Arizona, and local law organizations are responding to this influx by supplying pro bono and low-cost legal help to community outreach groups.

One option for those seeking legal aid is through the Mexican consulates in Arizona.

Rodrigo Alcocer Urueta, a spokesman for the Mexican consulate in Phoenix, said in an emailed statement that Mexican President Enrique Pena Nieto instructed the Ministry of Foreign Affairs to strengthen measures to protect Mexican nationals. This led to an allotment of $50 million to the consular network to strengthen the legal defense of Mexicans in the U.S.

“The 50 Mexican Consulates in the United States will become real advocates for the rights of Mexican migrants to provide them with legal advice, which will guarantee them the protection they require,” Alcocer Urueta said. 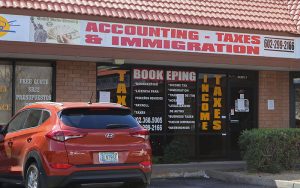 He said every Monday from 10 a.m. to noon, the consulate offers “consult days” which feature pro bono legal evaluations from attorneys.

Draper said people are more willing to spend money when they’re looking for reassurance and protection.

“When people are desperate, they just want someone to tell them it’s going to be OK,” he said.

Rick Debruhl, a spokesman for the State Bar of Arizona, said the state bar doesn’t have an official position regarding immigration, but believes that anyone seeking legal representation should be able to find the correct representation.

He said the state bar recently provided volunteer attorneys for a phone bank, organized by Telemundo, for those who have questions and concerns about immigration under the Trump administration.

“Whenever there’s chaos and confusion, it opens the door to fraud,” Debruhl said. “And that’s the situation we’re in.”

He said there was widespread confusion similarly with issues related to deferred action under the Obama administration — and notario fraud cropped up amid the confusion.

“If they get the wrong advice, if they get someone who takes advantage of them, they run the risk of losing whatever opportunity they had of living here in the US,” he said. 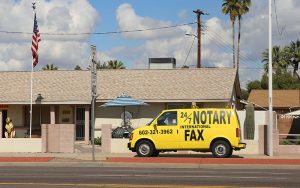 A 24/7 mobile notary service parked outside of a home in Phoenix, Arizona. (Photo by Sarah Jarvis/Cronkite News)

A bill sponsored by Arizona Sen. Martin Quezada, D-Phoenix, regarding notarios went through committee last week. Quezada, who has been running similar versions of this bill for a few years, said notario advertisements are prevalent in his district and in any Spanish-speaking community.

“It makes you ask the question, why are notarios advertising that business so prevalently in the Spanish language, yet you never see advertising in English,” he said.

SB-1421 mandates that public notaries who are not attorneys and advertise their services in a language other than English must include a notice saying “I am not an attorney and cannot give legal advice about immigration or any other legal matters,” in English and the other language of the advertisement.

The bill also mandates that notaries who fraudulently practice immigration and nationality law pay a fine of no more that $1,000 and have their commissions permanently revoked. The senate is expected to vote on SB-1421 in the coming weeks.

“They (those seeking legal aid) really should be going to a lawyer or the community organizations that are providing services en masse with the assistance of a lawyer,” he said.

Los Abogados Hispanic Bar Association has come out in support of Quezada’s bill, with attorneys providing testimony during the bill’s hearings. Jason Barraza, president of Los Abogados, said Trump’s election and immigration executive orders have resulted in a lot more phone calls and offers for the attorney’s work.

“For too long, Latin American immigrants have been demonized and characterized by the President as drug-smugglers, criminals, and rapists,” the statement reads. “President Trump’s executive orders to complete a wall between the United States and Mexico, and to end sanctuary cities only furthers the unjust and inappropriate categorizations of Latinos in this country.”

Barraza said recent events have shown the need for comprehensive immigration reform. The recent deportation of Mesa mother Guadalupe Garcia de Rayos “highlights the dangers of when policies are created from president to president,” he said.