Jeremy Graunke, Adriana Baniecki and Madyison Nichols, with trophy, show off some of their awards after finishing second in the Future City conpetition for their vision of a future Quito, Ecuador. (Photo by Kendra Penningroth/Cronkite News) 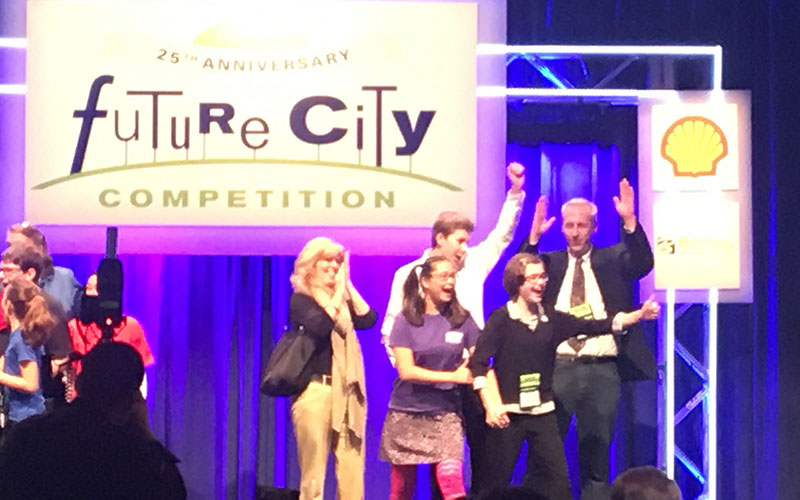 Members and advisers of the Veritas Homeschoolers team on the stage of the Future City engineering competition, where the Arizona team finished second in the national contest. (Photo by Kendra Penningroth/Cronkite News) 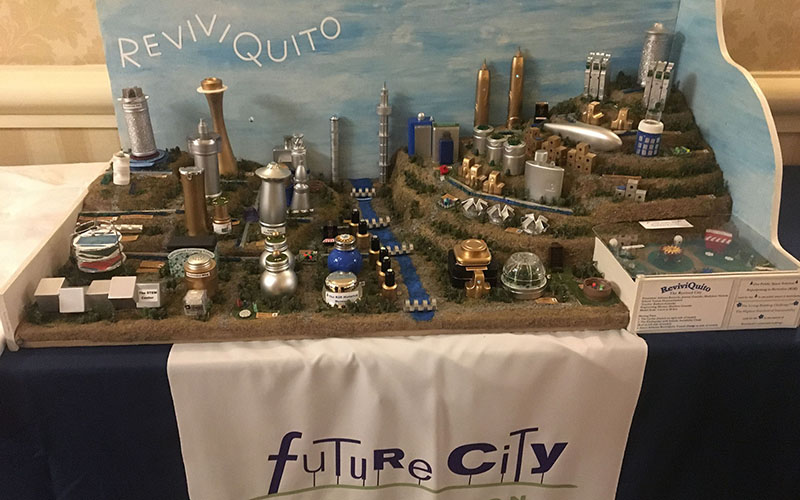 The Arizona team envisioned a sustainable, livable Quito, Ecuador, of 100 years in the future, and built their model of the city by recycling mostly secondhand and discarded items. (Photo by Kendra Penningroth/Cronkite News) 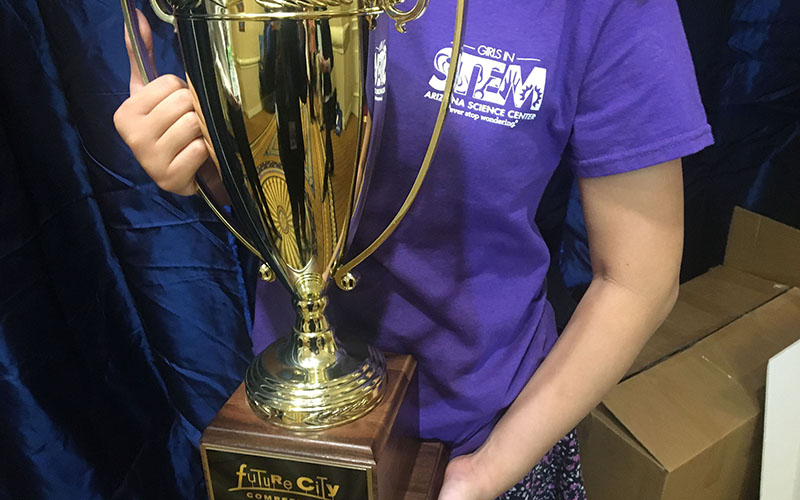 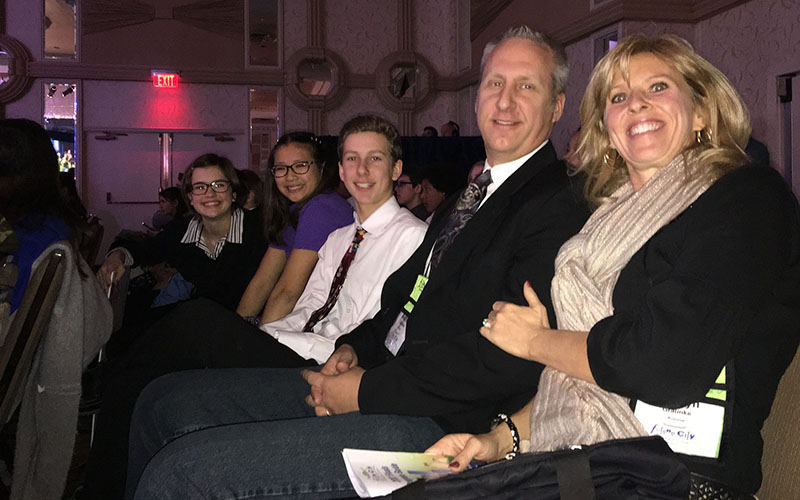 Kahryn and Matthew Graunke, from left, their son, Jeremy, and his Veritas Homeschoolers teammates Madyison Nichols and Adriana Baniecki at the Future City competition finals in Washington. (Photo by Kendran Penningroth/Cronkite News)

WASHINGTON – The judges were impressed, but when the awards were announced at the Future City competition Tuesday the Veritas Homeschoolers team came up just short, finishing second in the national engineering contest.

In a room that looked more like a concert venue than a hotel ballroom, with hundreds of middle school students bouncing to flashing lights and a booming beat, the Arizona team and its vision of a future Quito, Ecuador, finished second to a fictitious future city designed by a team from north Texas.

But the Veritas team members were still happy, noting that second place is an improvement over their fifth place finish in last year’s competition and that their success this year earned them $5,000 toward their STEM education.

The same three 13-year-olds who spoke eloquently on stage about hydroponic food and biophillic environments just an hour earlier were almost at a loss for words after the ceremony.

Jeremy Graunke, a three-time Future City attendee, said he was “super excited” while teammate Madyison Nichols was “ecstatic.” Adriana Baniecki said that she was happy to see the team’s improvement from last year.

All three were also gracious, saying they could understand why Texas beat them out for first place. There was no animosity between the two teams, which high-fived one another after the winner was announced.

It was the culmination of three days of judging that began Sunday evening, when 43 teams from 30 states and four countries presented the projects they have been working on for the last four to eight months. Winners of regional competitions advanced to this week’s national competition.

Thea Sahr, director of programs and communication for DiscoverE, the competition’s parent company, said that 50 percent of the participants are girls, which she called “truly spectacular” for an engineering program.

“It’s so inspiring to see these young kids come up with such great ideas,” said judge Catherine Townsend, president and CEO of the Trust for the National Mall. “I thought they (Veritas Homeschoolers) were really innovative, I thought that their presentation was really great.”

The Veritas model, ReviviQuito, represents the students’ vision for Quito, Ecuador, in 100 years. Townsend noted the group’s “seismic invisibility cloaks” that protect ReviviQuito from earthquakes, and said she was impressed by the kids’ autonomous transit system.

After the award ceremony, Kathryn Graunke, the Veritas team teacher, said she was “elated.”

“They (the kids) were targeting the award for best food-production system,” said Graunke. “It was the last interview of the day (Monday) and they were exhausted. They were worried it would escape them … so they were so excited.”

Her husband and Jeremy’s dad, Matthew – who also serves as the team’s engineering mentor – said the competition was tough but the judging was “very fair.” Still, he was “shocked” to see the Arizona team in the top two.

“They’re all equal when I see them up there,” Graunke said of the finalists. “The abilities that they have amaze me … they all brought such wonderful talents.”

Sahr said she is always impressed by the talent the middle school students bring to the table.

“We hear from our judges, we hear from our partners … it gives them hope for the future,” she said. “These kids are looking at what tomorrow should look like and what their role will be in that, and they’re pretty excited about that.”