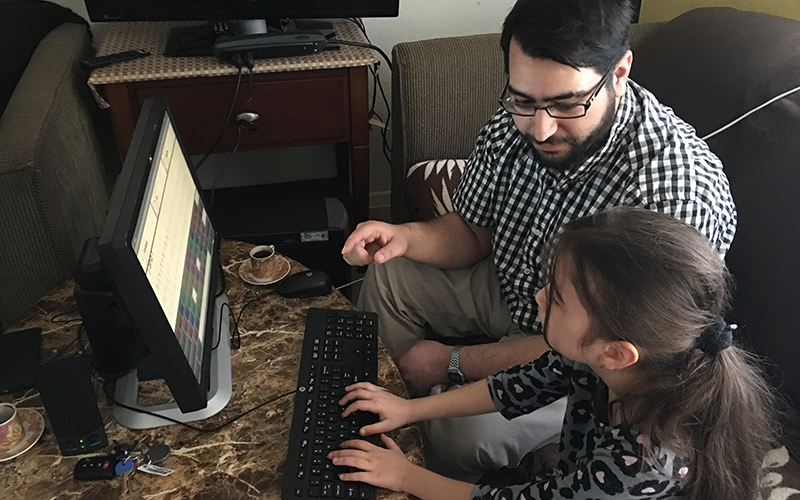 Riad Sbai of PCs for Refugees shows 9-year-old Syrian refugee Aya how to use the educational programs he has uploaded on her new computer. (Photo by Mindy Riesenberg/Cronkite News)

PHOENIX — In a dimly lit apartment off I-17, a 9-year-old Syrian girl named Aya is learning how to use her family’s first computer.

She places her hands on the keyboard and presses “A” when she hears the letter pronounced through the speakers.

“Bravo!” says Riad Sbai, the founder of PCs for Refugees, the nonprofit that provided the computer to her family.

Aya’s family has been in the U.S. for four months. Although she’s the age of a fourth-grader, Aya has been placed in second grade because she’s been in a Turkish refugee camp without a formal education since she was 5 years old.

Firas Kharma, Aya’s father, looks on with a smile as Aya deftly manages an English-language learning program on the new computer.

An accountant back home in Damascus, Kharma washes cars at an airport rental facility because his English is limited. He says he hopes the language program PCs for Refugees has provided on the computer will help him find a better job.

Computers are lifelines for refugees who must navigate a litany of online paperwork related to health care, applying for jobs, and children’s schoolwork. They also provide much-needed language drills and other educational opportunities, as well as a connection to family overseas.

“We will be using the computer to communicate with our family in Turkey and Germany,” Kharma said through a translator. “I also want to teach my daughter Excel so she can have a better future.” 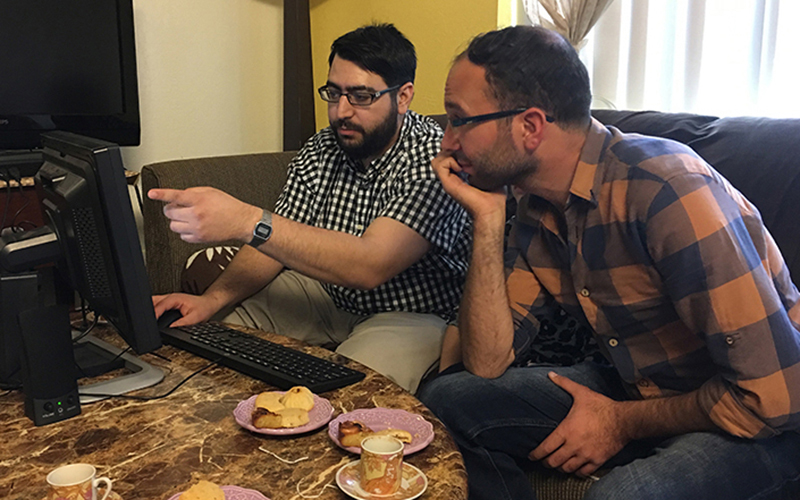 Riad Sbai of PCs for Refugees (left) shows Firas Kharma, a refugee from Syria, how to navigate the Internet with his new computer. (Photo by Mindy Riesenberg/Cronkite News)

“The war has been going on for so long; a lot of the children haven’t even been in school,” Sbai said. “There’s also a different language and culture to navigate, which makes integrating such an anxiety-filled journey.”

PCs for Refugees was developed when Sbai’s mother, also from Syria, began visiting refugee families and noticed that they didn’t have computers and could not afford them.

A light bulb went off for Sbai, a web developer who realized that providing computers for these displaced families would be a wonderful opportunity for them.

He decided he would donate one of his own personal computers to a family his mother was assisting. The family was so grateful, Sbai then went on his personal Facebook page and started asking people to donate their old computers.

Within months, PCs for Refugees became a 501(c)(3) nonprofit organization, run out of Sbai’s home in Chandler.

Sbai and his team take used computers, refurbish them, and load them with open source programs in language, math and science, as well as with important documents families need to navigate their new lives in the U.S.

PCs for Refugees matches families in need with computers through Syrian refugee support groups and word of mouth. To date, 95 families have been connected to a computer and Internet access.

“Through their new language skills, they incorporate into the community better.” – Debbie Rhoads

“We are able to get them cheap Internet service through the Connect2Compete program that both Cox and CenturyLink provide,” Sbai said. “If they have a child enrolled in school who is provided a free school lunch, they qualify for very inexpensive monthly service, which has been awesome.”

“We believe that everyone, everywhere in the U.S. should be connected to the Internet and the opportunity it brings,” said Chike Aguh, CEO of EveryoneOn, which developed Connect2Compete.

“The families that have used the language programs Riad has included on the computers have had phenomenal success,” said Debbie Rhoads Crenshaw of Syrian Refugee Connection. “Through their new language skills, they incorporate into the community better.”

The small PCs for Refugees team visits each household personally, helping families set up their computers and teaching them to use the software.

Crenshaw noted that Sbai specializes the computers to each family depending on their needs.

“There was one instance where both the father and son had design experience, so he made sure they received a computer that was able to do high-end design work with a larger monitor,” Crenshaw said. “It was a breath of fresh air for them.”

“I try to imagine how it would be if I had to start over somewhere new, even with my computer skills,” Sbai said. “It’s a difficult process and I want to show them that there are people who genuinely care for them.”