Jeremy Graunke puts final touches on his team’s model for how the city of Quito, Ecuador, might look in the future with students’ plans for a sustainable, livable city. (Photo by Kendra Penningrogth/Cronkite News) 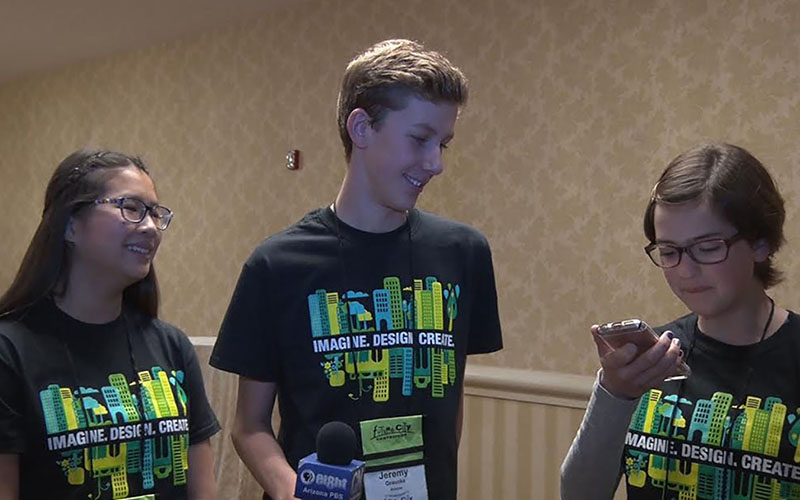 Veritas Homeschoolers, from left, Madyison Nichols, Jeremy Graunke and Adriana Baniecki, Arizona middle schoolers on a break from setting up their project for the Future City Competition. (Photo by Marisela Ramirez/Cronkite News) 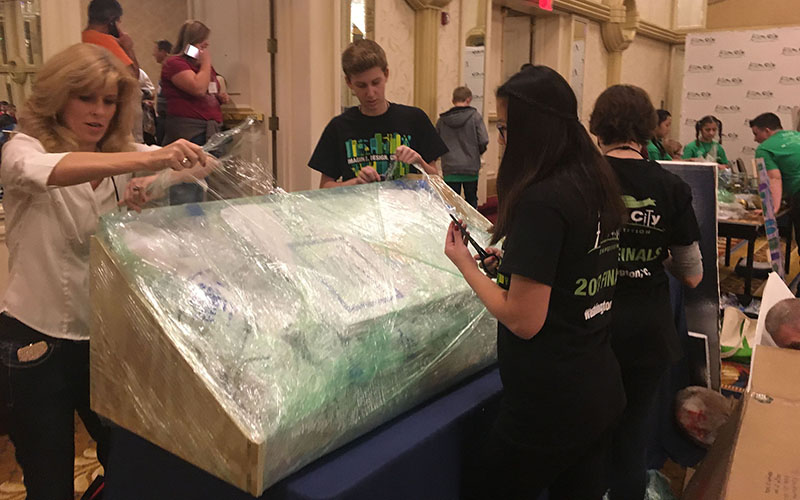 Kathryn Graunke help her students on the Veritas Homeschoolers team unpack their ReviviQuito model before the Future City Competition in Washington, D.C., over the weekend. (Photo by Kendra Penningroth/Cronkite News) 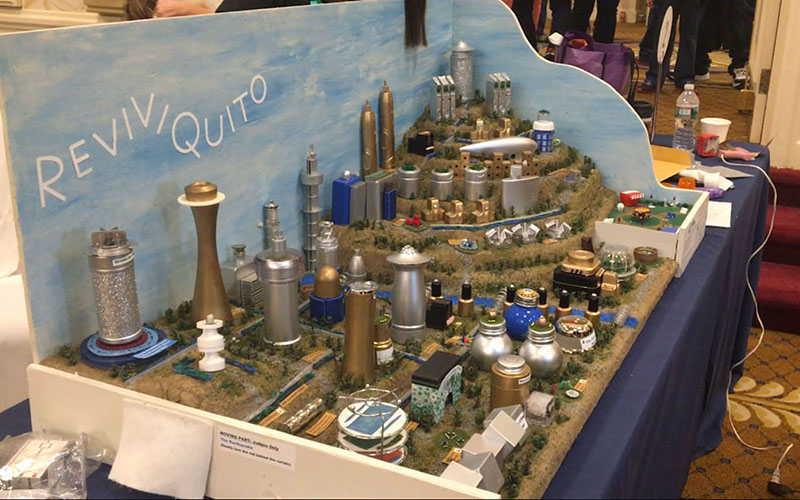 The Veritas Homeschoolers’ Future City model, ReviviQuito, imagines what Quito, Ecuador, might look like in 100 years under their plan. The model is made largely with cast-off parts. (Photo by Kendra Penningroth/Cronkite News)

WASHINGTON – When faced with the problem of cleaning up a polluted petrochemical site in Ecuador, a team of urban planners from Arizona turned to “microbial degradation” and “phytoremediation” to biologically break down pollutants on the site.

A team of urban planners who are still in middle school.

The Veritas Homeschoolers were in Washington this week to compete in the 25th annual Future City Competition, which challenges sixth-, seventh- and eighth-grade students to design a city of the future that solves problems the city faces today.

Each team has an engineering mentor to ensure that their plans are feasible, but otherwise it’s up to the kids, who are limited to spending no more than $100 on the model of their project that they are presenting to judges this week.

“I think that it’s probably the most holistic way for kids to learn in junior high. They write, they do math, they do art, they do team work, research and they have a lot of fun,” said Kathryn Graunke, the students’ teacher. “My favorite part is that Future City treats kids like professionals.”

She said six students spent months working on the Arizona project that won a regional competition in January. After auditions, three of the students were selected to come to Washington to present their plan against hundreds of other students from around the country.

This year’s competition challenged students to revitalize public spaces, and the Veritas team settled on Quito, the capital of Ecuador, because students felt the problems there presented the most opportunities.

“We wanted to make sure we picked somewhere with a lot of problems with public spaces, or just the public in general,” said Madyison Nichols, 13, one of the students. “We noticed Quito had lots of slums in it, so that’s probably why we chose it.”

When creating their city model, the students weighed the benefits, costs and risks of completely revitalizing Quito. Their project speaks in terms of the future, hoping the model represents what the city will look like in 100 years.

Their project, “Repurposing to Revitalize: Changing Quito to ReviviQuito,” is composed of a Sim City virtual model, an essay and a to-scale physical model.

The Veritas team decided to convert all of the roadways to bike and pedestrian paths with the goal of creating a biophilic, walkable city.

The students also decided to transition the entire city to renewable energy. In their vision of that future, Quito’s Petroecuador fuel terminal would be abandoned. Any lingering soil or groundwater contamination would be addressed with “microbial degradation to break down the petroleum into carbon dioxide and sugars. Phytoremediation plants cleaned polluted groundwater by biodegrading hydrocarbons,” according to the essay accompanying their project.

Once cleaned up, they would transform the area into a STEM Center for students, their essay said.

David Ellingson, one of the Arizona region coordinators for Future City, said students in the competition are “learning life skills … how to do things I do on a daily basis.”

The Veritas team’s engineering mentor, Graunke’s husband, Matthew, said he sees value in the competition for many reasons, one of which is that “trying to sell your idea as an engineer is a piece you don’t even get in college.”

It also teaches them to live within a budget: The competition requires that the team spend no more than $100 on its model. Kathryn Graunke took it a step further, so that almost everything in ReviviQuito is made up of “junk,” with lipstick tubes, old sprinklers and blender parts all finding new life in the display.

The “drone” or transportation system is the favorite piece for Adriana Baniecki, one of the three Veritas students in Washington.

“I like how it looks,” Baniecki said of the system designed by teammate Jeremy Graunke. “I think it’s cool how it looks like they’re suspended right in the air.”

Contest judging began Sunday evening and will continue until Tuesday morning, when the top five projects advance to present in front of the entire competition. The winning team gets an all-expenses-paid trip to Space Camp and $7,500 from Bentley Systems Inc.

For the Veritas team, this year’s competition is a shot at redemption after finishing fifth last year. But for Jeremy, winning would be icing on the cake.

“I just think it’s really fun, the biggest reward for doing Future City is getting your all-expense trip to Washington, D.C.,” Jeremy said. “So anything after that is even more fun than coming here.”

His mom, Kathryn Graunke, hopes to see her students win but is much more excited about the lessons they learn throughout the process.