This workspace is open for students to do anything from class projects to passion projects with top-of-the-line technology. It boasts $2 million in equipment, which includes a desktop 3-D printers, large 3-D printers, laser engravers and vinyl cutters.

The hub opened its doors to the public last month to show off its new toy, a Concept Laser.

Unlike most 3-D printers that print by heating and layering plastic or metal filaments – sort of like a hot glue gun – the new machinery prints in 3-D metal by melting layer upon layer of ultra-fine metal powder. The lab also received a molecular microscope that will help students discover how to print the metal more effectively. 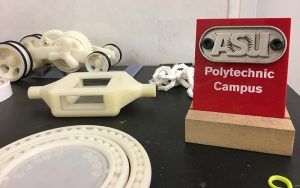 Lab manager Sean Dengler said having a wide variety of technology available to students allows them to push the boundaries.

He said the students learn things at the hub that he had to learn in the workforce. He said the exposure gets students hired right out of college.

“They’re doing projects freshman, sophomore, junior, senior year,” he said. “I know that large companies like Honeywell are looking to hire them.”

Riley Chicci is one of those students.

Chicci, a junior at the Polytechnic campus, works as a lab technician in the innovation hub.

He comes in during his personal time to play with the printers and see what he can do next. Recently, Chicci was a part of a bigger project where he printed the tracks and wheels of a robot used to find land mines in developing countries.

He said that he’s one of the reasons the hub got 3-D printers in the first place. “I started messing around with one in my free time,” he said. “We (together) decided which ones to get and stuff.”

3-D printing is still relatively new to the masses. According to technology blog Harboring Systems’ timeline on 3-D printing, it started in 1989, but the technology wasn’t made available to the public until four years later. It wasn’t until 2008, 20 years later, that the first self-replicating 3-D printer consumers recognize today went on the market.

Now 3-D printers can work with printing different materials such as plastics and metals. Car parts have been printed for a few years now. And in December, Adidas even made its first 3-D printed shoe.

Dengler said he believes it will take a few more generations before the average household can easily 3-D print everything at home, but he said it’s coming: “Soon people will just be able to order the template on Amazon and print it right at home.”