Arizona Secretary of State Michele Reagan said she had to learn a lot in a hurry during a hectic 2016 election year, but had pointers for other elections officials. (Photo by Anthony Marroquin/Cronkite News) 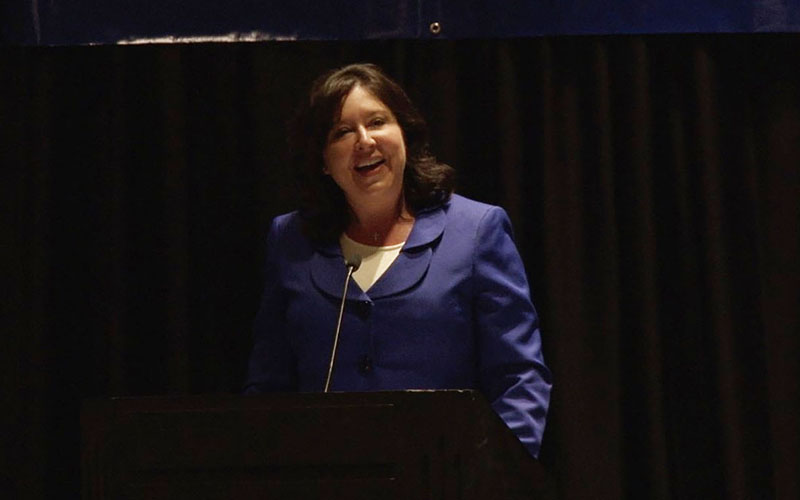 Arizona Secretary of State Michele Reagan, speaking to the National Association of Secretaries of State, said that communication with voters is one of the most important tools in a crisis. (Photo by Anthony Marroquin/Cronkite News)

WASHINGTON – It was a rough year for Arizona Secretary of State Michele Reagan, who told a national group Friday that after learning the hard way how to deal with election issues, she hoped her experience would keep them from going through the same turmoil.

Reagan was the featured speaker at a National Association of Secretaries of State convention in Washington, where she touched on everything from long lines at polling places to Russian hacking – and the headaches that come with each.

“I received a call, and I’m going to paraphrase, but it was pretty similar to this: ‘Are you sitting down? The FBI just called, we’ve been hacked, and they’re pretty sure it was the Russians,'” Reagan recalled to dozen of fellow secretaries of state.

“Are you kidding me?” she said, drawing laughter from the crowd.

It was a generally light-hearted speech to an appreciative audience, but it had its serious moments. She warned her colleagues that these are trying times for voting officials, who face threats that their predecessors could not have dreamed of.

“If any of you think that while we’re sitting here right now your state is not being hacked, or attempted to be hacked, we are fooling ourselves,” Reagan said.

“In fact, just since we started testing our systems more and more, we discovered one month in Arizona we had over 20,000 attempts on our system that were unauthorized,” she said.

Reagan told the group that 2016 was the first year since taking office that she had to oversee an election – and she faced four that year. It wasn’t exactly smooth sailing for the freshman secretary, with Arizona voting problems making national headlines multiple times during the year.

The biggest headlines – and headaches – came from an issue that Reagan said was not even her responsibility. A shortage of Maricopa County polling places in the March presidential preference election led to voters being forced to stand in line for hours to cast a ballot, if they made it to the polling booth at all.

Reagan said after her speech Friday that while she is looking for ways to prevent long lines in the future, the March fiasco was a local problem for which she became the public face. But she understands the voters’ frustrations.

“To the average person who’s going and voting and just wants to get in and get out, you can’t blame them when they get upset at the entire election community for what happened,” Reagan said. “Anyone who’s waiting for five hours to cast a vote for president, that’s very troublesome and not good for democracy.”

There were other issues last year. Reagan’s office was battling a handful of legal challenges to the state’s voting laws in the weeks before the November election, with the U.S. Supreme Court deciding one case the Saturday before Election Day.

The Russian hacking call, the focus of her speech, came right after the presidential preference election in March.

Reagan, who said she knew little about security breaches and hacking prevention, had to become an expert in 36 hours. And then she had to get that information to frantic voters.

“Go out and educate voters that when they hear the words ‘Russian’ and ‘hack’ in the same sentence, it doesn’t necessarily mean that the votes have been altered,” she told her colleagues, emphasizing the importance of communication.

Reagan explained that there is a difference between the voter tabulation systems, which are run offline, and the voter registration systems, which are online and more susceptible to hacking. While that may be common knowledge to elected officials, Reagan said most voters understandably don’t know the difference between the two.

“We need to be constantly educating our voters that there is a huge difference between the voter registration systems and the voter tabulation systems,” Reagan said.

“This was something that, when everyone’s all up in arms and nervous and anxious, it’s a very hard thing to cut through,” she said. “But you have a great opportunity to do it now, and especially to be doing it in a non-election year.”