Navajo Nation President Russell Begaye said tribal nations have made gains in their dealings with the federal government but still have to seek permission too often for what they should control. (Photo by Anthony Marroquin/Cronkite News) 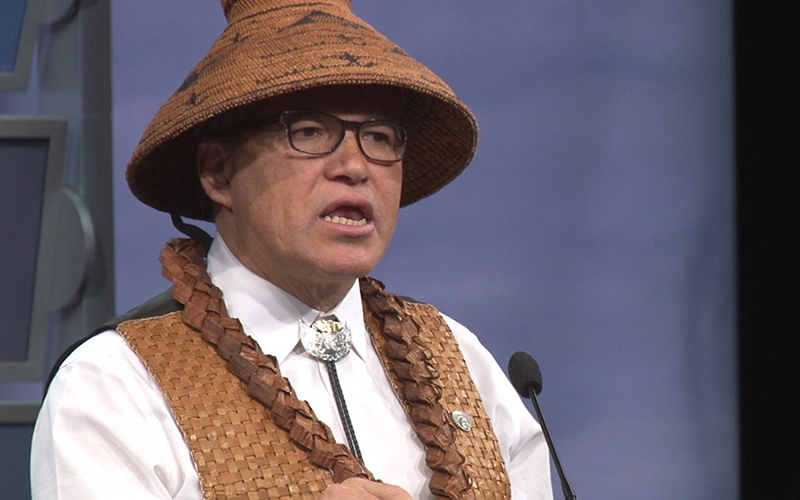 WASHINGTON – Tribal leaders said they hope to see a continuation of the gains in tribal and federal relations under the Trump administration that they said began during the administration of President Barack Obama.

National Congress of American Indians President Brian Cladoosby said Monday in the annual State of Indian Nations address that Obama fostered “the most successful government-to-government relationship Indian people have enjoyed since the formation of the United States,” a relationship he said was built on trust.

“Trust is a sacred obligation accepted by the federal government in exchange for the millions of acres of land we ceded that created the greatest nation in the world,” Cladoosby said. “Today we stand ready to work with you as partners to build a stronger America, and to build on the shared history between our nations and to seize the opportunities to strengthen the relationship between tribal governments and the federal government.”

But as Cladoosby stressed the value of partnerships between the federal government and tribal nations that can empower Indian Country, some leaders, like Navajo Nation President Russell Begaye, said there is still much more that has to be done.

“What I heard today was. ‘Let’s make the process better, let’s make leasing of lands more equitable, let’s spend less time in providing these things,'” Begaye said. “But we (tribes) need to make the decisions, give us the full authority, we’ll regulate it, we’ll do the leasing, give us the right to do that.”

Begaye said that tribes are still under the thumb of federal rules and regulations that prevent them from having complete authority over resources on their land. He said funds intended for Native nations are wrongfully funneled through the states.

“Putting us under the authority of states is wrong because we didn’t sign treaties with states,” Begaye said. “We should be able to get those funds directly from the government. When it goes through the states it becomes a competitive grant because now we are in competition with counties and other programs. That is wrong.”

But Sen. John Hoeven, R-North Dakota, said in the traditional congressional response to the address that there is more common ground than division between tribal and federal governments when it comes to Indian issues.

“If we work in a bipartisan way, we can create jobs, we can raise the standard of living and quality of life in tribal communities,” said Hoeven, the chairman of the Senate Indian Affairs Committee. “I’m confident that even despite the diversity of views on issues, such as the Dakota Access Pipeline, we can work together and we will work together going forward.”

As Trump puts his Cabinet together, leaders of other tribes say they are optimistic about a few things that may improve the administration’s connection to tribes.

William Bear Shield, who represents the Rosebud Sioux tribal council in South Dakota, said after a Sunday meeting of the Coalition of Large Tribes that tribes are hopeful about Trump’s nominee for Interior Secretary, Ryan Zinke, who has a record for listening to tribal concerns. Bear Shield said Zinke could provide tribes a door to White House affairs.

Cladoosby also pointed to recent legislative advances like the Indian Trust Asset Reform Act, which he says has helped give tribes power to make decisions on issues on their land and assets, and programs that have kick-started renewable energy operations on Indian land in states like Nevada and New Mexico.

Despite his concerns, Begaye said he, took is hopeful about the Trump administration. He said he hopes Trump will stick to his “stand on your own two feet” philosophy and let the nations become self-sufficient.

“If he is really for being independent, we want him to say your nations are responsible for what you have, full authority over criminals, complete control over resources, control of the air -we want this administration to say, ‘We believe in that,'” Begaye said.