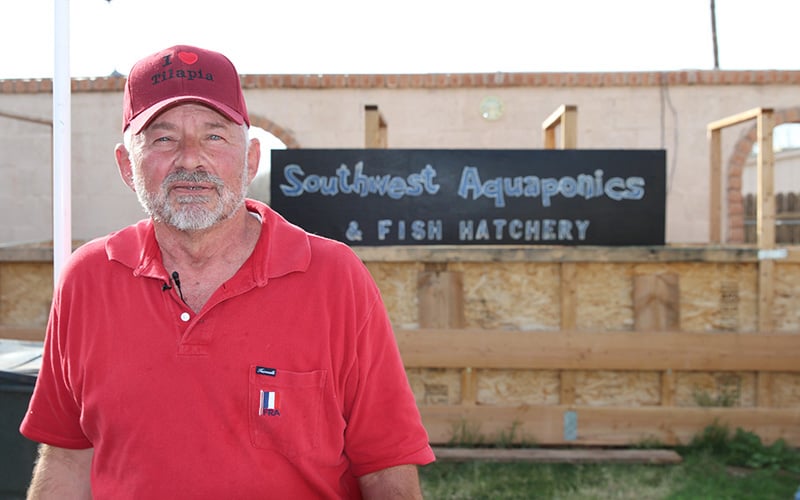 John Healy started Southwest Aquaponics and Fish Hatchery in Glendale with just one tank in his backyard. He now helps people across the state start their own home gardens with aquaponics. (Photo by Courtney Kock/Cronkite News)

But step behind the gates, and you’ll find rows and rows of tanks and a barn that collectively hold 20,000 gallons of water and about 15,000 tilapia.

Owner John Healy’s farm is one of several commercial aquaponics farms throughout the state. Analysts estimated the industry’s annual growth rate at more than 10 percent from 2016 to 2020, fueled by an increasing demand for organic food, according to Sprout Intelligence. The analysts said the global aquaponic farming market was worth more than $500 million in 2015.

Many people also have started operating these farms on a smaller scale as a hobby, saying the produce is healthier and often tastes better.

“You get the most efficient growth of vegetables with a whole lot less chemistry,” Healy said.

Aquaponics systems grow fish and plants together in a closed recirculating system without using traditional soil.

It uses the natural nitrogen cycle and a mix of aquaculture and hydroponic systems to get the best of both worlds.

Fish are housed and fed in tanks at the bottom of the system. Pumps circulate the fish water, which has nutrients that essentially serve as fertilizer, to grow areas at the top. The water is then recycled, cleaning the water and removing anything detrimental to the fish.

The systems can grow a diverse crop of vegetables, herbs and other plants.

Healy added that with 1-square foot, he could get six times the production of a traditional dirt farmer.

“There is no such thing as a brown thumb in aquaponics,” Healy said.

The farm not only sells the vegetables at farmers markets, it also sells fish and aquaponics systems to the public. 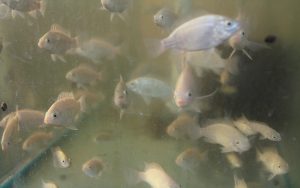 Young tilapia stay in the hatchery, which is an old horse barn that has been converted to house thousands of fish, at the Southwest Aquaponics and Fish Hatchery in Glendale. (Photo by Courtney Kock/Cronkite News)

In 2012, Arizona was tied for the third-most aquaponics farms – both commercial and residential – in the U.S. and possessed the second-largest average aquaponics farms by size with an average of about 3,208 gallons of water per farm, according to research by the Southern Regional Aquaculture Center.

Part of the growth has to do with the demand for both fresh local produce and locally sourced fish. Research by the National Oceanic and Atmospheric Administration suggests there is a market for local fish farmers.

According to its research, Americans consume about 4.8 billion pounds of seafood annually, yet more than 91 percent of our seafood is imported from other countries.

Brooks said he’s optimistic that aquaponics is starting to make its way into the mainstream, but he recognizes that aquaponics in Arizona faces some of the universal challenges of the discipline, such as finding ways to make aquaponics systems cost effective, ensuring proper food safety measures and making further technological advances.

An entry-level aquaponics system costs about $375. From there, the only additional expense would be a growth medium for the plants and materials for expanding the design. 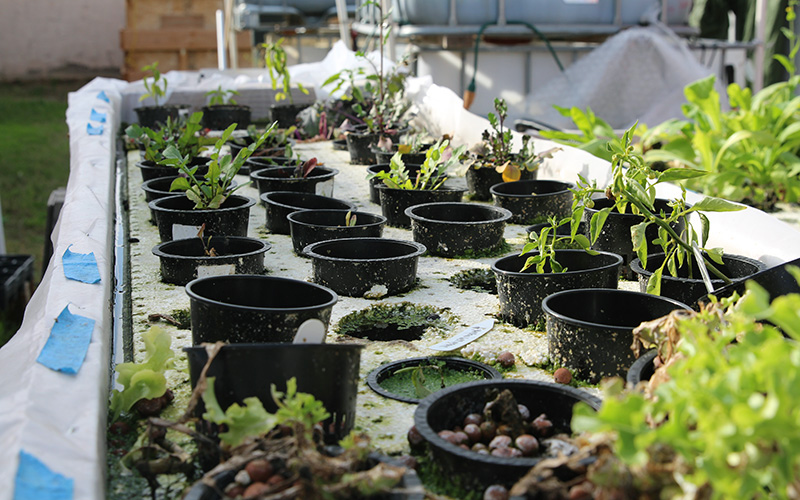 One advantage Brooks sees for aquaponics in Phoenix is that the city has made efforts to work on zoning for agriculture, traditionally the greatest impediment to urban agriculture.

“It gives the foundation to say, ‘yes I can do this,'” Brooks said.

Also promising for the discipline is the work of entities such as Southwest Aquaponics to bring more people into the aquaponics fold.

Healy received his introduction to aquaponics 10 years ago, through discovering the benefits of fish waste for his garden and trees while raising koi. He did some research, installed his first aquaponics system three years later and switched over to tilapia because of their hardiness, faster growth rate and higher popularity among consumers.

Now Healy finds himself introducing others to the benefits of aquaponics.

He estimates that he has converted more than 1,000 people and said his demographic seems to be under 35 and over 60.

“People concerned about their own health and the health of their families, and people over 60 who have had a health scare and are trying to correct,” Healy said.

Michael Hooker, 64, of Sun City, made the leap.

Hooker acquired an aquaponics system from Southwest Aquaponics in October and used his engineering background to build on the design and expand the amount of plants he can grow.

Aside from the health benefits and advantages of decreasing his trips to the grocery store, Hooker’s also found benefits in quality.

“The homegrown stuff sure does taste a lot better,” Hooker said. “Bite into a tomato from a store is one thing but pick one off my vine here, it’ll knock your socks off.”