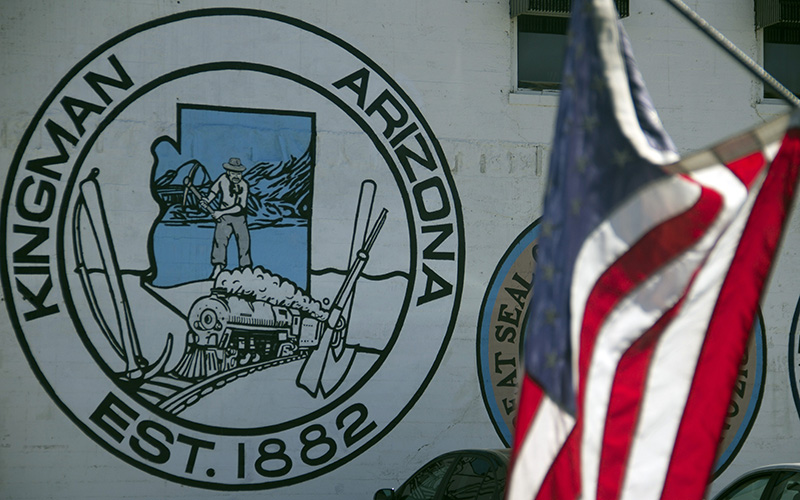 Kingman, Arizona is on Route 66 in Mohave County, Arizona, where nearly 74 percent of the vote went to Donald Trump. (Photo by Lily Altavena/Cronkite News)

She wants to remind him to take care of himself and to let the president know she thinks he is doing a good job.

“We the people need you and we have your back,” reads the message, written from the store she owns in downtown Kingman.

The city of Kingman sits along Route 66 in Mohave County, where Donald Trump won 73.7 percent of the vote, the highest percentage in any Arizona county, according to election results from the Arizona Secretary of State. Turnout, too, spiked for the county in November’s election, with 70.3 percent of registered voters turning in their ballot–compared with 61.6 percent in 2012 and 65.5 in 2008.

Trump supporters in Kingman said they voted for the businessman because they hoped he would revitalize the country’s economy. Some said that they think he’s made a few missteps during his first few weeks in office. But they also believe that news coverage of the president has been harsh. For the most part, they agree with his executive orders.

Irish is a retired accountant. She opened the antiques shop to keep herself busy. For several decades, she worked in construction accounting, but then “the bottom fell out of the construction industry.” So she moved to manufacturing. 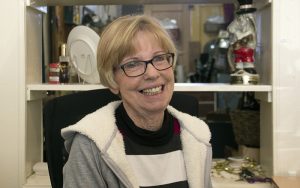 Kathy Irish sits at the antiques shop she owns in Kingman. Irish voted for Donald Trump and hopes he can energize the economy. (Photo by Lily Altavena/Cronkite News)

“I worked for two companies and both of their doors closed, and this is what’s happening in the last eight years,” she said. “I don’t know why people can’t see it.”

She thinks it is hard to judge Trump’s actions with just more than three weeks in office. She praises him for trying to incentivize corporations to bring manufacturing jobs to the US and that “a couple companies have already said that they’ll come back.”

For 36-year-old Kyle Moon, Trump is “doing what he said he would.” He said he supports the president’s order temporarily banning refugees and visitors from Somalia, Syria, Sudan, Iraq, Iran, Libya and Yemen.

“It’s not a race thing,” he said. “It’s more or less protecting our country. It’s Americans first and I like to see that.”

That order was blocked last week by a federal appeals court.

Few people are in downtown Kingman on a weekday morning, but its main thoroughfare, Beale Street, sees a burst of activity during lunchtime. Moon has lived in the town of nearly 29,000 people for decades and he’s seen people leave as construction projects dried up. Several years ago, he foreclosed on a home and endured a bankruptcy.

The median income in Mohave County is $40,017 while its unemployment rate is 6.16 percent, according to the Mohave County Economic Development Department. Statewide, the median income is $51,492, census data shows, while Arizona’s unemployment rate was 4.8 percent in December of 2016, according to the Bureau of Labor Statistics.

But Moon, who works in the beverage industry, thinks the tide is turning in Kingman, with more business owners excited about Trump.

The father of two also agrees with the president’s proposed wall on the US-Mexico border. 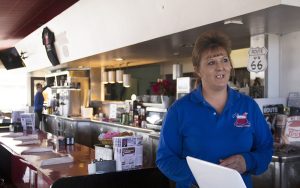 Tammy Rutherford stands in the diner she owns on Route 66 in Kingman. A Trump voter, she said he is “too cocky to fail.” (Photo by Lily Altavena/Cronkite News)

But sitting in the red, white and blue diner she owns along Route 66, Tammy Rutherford, a Trump voter, said she’s not so sure about the president’s plan for a wall. She believes illegal immigration is a problem and worries about drugs coming across the border, but wonders if a wall will be costly and ineffective.

“What’s a wall really going to stop?” she said. “I don’t know how to fix the problem… I don’t think the wall is necessarily the answer.”

Rutherford appreciates that Trump recently attended the funeral of a U.S. Navy SEAL – the first combat death since his inauguration. She thinks there is a lot of work to be done in healthcare, immigration and more. And she said she sees Trump doing the work. She voted for him because she believes he is “too cocky to fail.”

But back at the antique store, Irish worries that lawmakers unwilling to work with the president could wear him out.

She is a lifelong Republican, but feels especially energized about Trump.