Carmen Wilson, a teacher in Greasewood on the Navajo Nation reservation, joins Allan Blacksheep, principal education specialist, as he carries a box containing the materials for a project designed to build interest in science, technology, engineering, arts and mathematics fields for Navajo students. (Photo by Chelsea Shannon/Cronkite News)

Jordan, an assistant professor of engineering education at Arizona State University, was there to judge a science fair.

One project stuck with him: a seventh-grade girl’s experiment on how building materials affected the transmission of heat. She used traditional Navajo houses, called hogans, as her model.

“I was blown away by seeing kids who had taken elements of their culture and embedded them in really creative ways into science projects,” Jordan said of the 2012 trip. “That started to inspire me more, and as I got into doing STEAM machine camps.”

Encouraged by what he saw, Jordan partnered with the Navajo Nation to begin holding science, technology, engineering, arts and mathematics camps in various parts of the reservation.

The camps teach Navajo students, both middle and high school, how to merge chain reaction machines with storytelling and Navajo culture. They have held about 10 camps camps in the past four years.

In addition to the camps, the National Science Foundation in 2014 awarded Jordan and the Navajo Nation a grant to develop and implement new engineering curriculum into Navajo schools. The grant has provided more than $455,000 to date. 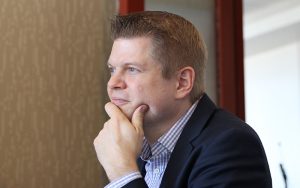 Shawn Jordan, an assistant professor in the Ira A. Fulton Schools of Engineering at Arizona State University, recieved a Presidential Early Career Award for Scientists and Engineers from the White House. (Photo by Chelsea Shannon/Cronkite News)

The White House recently recognized Jordan’s work by awarding him the Presidential Early Career Award for Scientists and Engineers.

Kalvin White, education administrator with the Office of Diné Science Math and Technology, works with Jordan.

“Dr. Jordan has been working with us for the past four years, providing us with his services to implement STEM and STEAM camps here at some of our tribally-controlled schools,” White said.

The Navajo Nation spans northeastern Arizona, southeastern Utah and northwestern New Mexico. It is the largest land area retained by a U.S. tribe.

Jordan said the camps temporarily fill the demand for science and technology education in the Navajo Nation. He said student participants have asked for more advanced opportunities.

White said the new demand for science and technology education is not unique to the Navajo Nation. 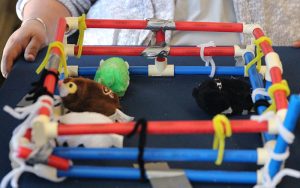 Teachers attending a workshop in Flagstaff created corrals to contain toy mice. Teachers will replicate this project with their students. (Photo by Chelsea Shannon/Cronkite News)

According to a study by the U.S. Department of Education Office for Civil Rights, less than half of American Indian high school students have access to the full range of math and science courses in their schools.

“Science has been taught in some contexts in Native cultures as a way to oppress rather than as a way to empower,” Jordan said. “Some scientists and science educators have gone and said, ‘Well, you know the ways of science are right. Your Native ways are wrong.’ And then they wonder why we have low participation of Natives in science.”

Jordan said he was cautious to approach the curriculum as an outsider.

“I looked at my skills as a researcher and then also thought very carefully about my role not being Native and what my role should be in this whole process,” Jordan said.

While Jordan may bring the researcher and engineering aspect, White said he and his staff on the reservation bring the cultural component.

“Shawn has been flexible … the partnership wouldn’t have worked without that component,” White said.

Jordan said the partnership could work for other groups as well.

For now, Jordan said he is focused on building up the pilot curriculum, which they are slowly introducing into Navajo classrooms. They hope to eventually replace the old science curriculum altogether.