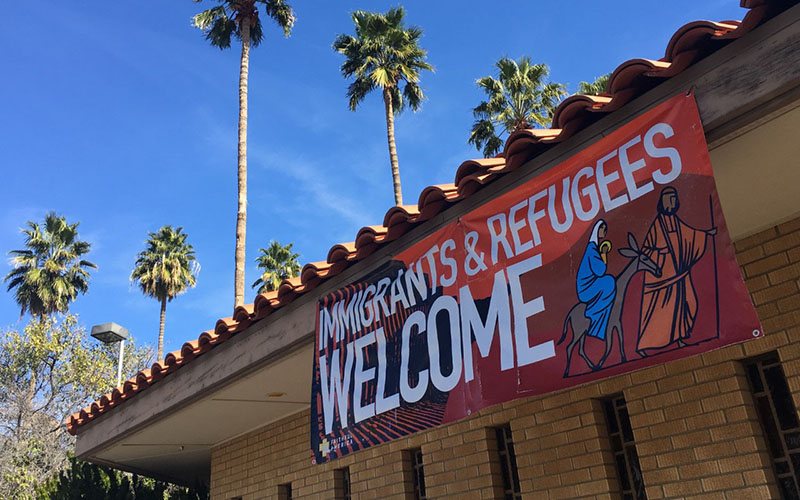 Churches are advocates for refugees living in the Valley, welcoming them and providing them sanctuary. (Photo by Diego Mendoza-Moyers/Cronkite News)

PHOENIX – Amid nation-wide backlash to President Donald Trump’s executive orders to build a wall along the U.S.-Mexico border and crack down on immigration, churches across the Valley have taken a stance against the Trump administration’s new policies.

Many churches throughout the Valley have long been advocates for undocumented immigrant rights by providing shelter for immigrants or by partnering with other groups to take water to locations near the border. However, given the current heated political climate surrounding the issue of immigration, these churches are taking it a step further.

The First Congregational United Church of Christ near downtown Phoenix last week declared itself a sanctuary for undocumented immigrants. Immigration enforcement agencies typically avoid detaining what they deem as low-risk immigrants in “sensitive” places, such as churches and schools.

“In times of crisis, people of faith have to return to ancient traditions,” pastor James Pennington said in a statement.”Refugees in the Roman Empire found sanctuary in Christian churches. Slaves in pre-civil war United States found sanctuary in the Underground Railroad and congregations across the country.

“Political refugees from the civil wars in Central America found sanctuary in over 500 churches in the United States when our federal government failed to offer asylum or refuge under existing laws. First Church joins the many congregations already offering sanctuary today in the face of one of the most urgent and large scale humanitarian crisis in the United States.”

This came just before Phoenix Mayor Greg Stanton said that, under Arizona law, Phoenix could not become a sanctuary city for immigrants, making the role of the church as a sanctuary vital for immigrants in the U.S. seeking asylum.

Eric Ledermann, pastor at United Presbyterian Church in Tempe, sheltered an undocumented man in 2014 for 100 days.

Luis Lopez, then 16, entered the U.S. after leaving Guatemala to escape gang violence. While he was staying at the church, former President Barack Obama issued an executive order which “re-prioritized” immigration enforcement, which meant Lopez fell out of priority and is now seeking clemency in order to become a legal resident, Ledermann said.

Ledermann and United Presbyterian have stood on the side of immigrants like Lopez for years> However, they add that the uncertainty surrounding Trump and his policies makes it difficult to be active on the advocacy front.

“We don’t know exactly what we can do and what our capacity is at this point,” Ledermann said. “We’re deeply concerned about the current presidential administration. Part of it is he’s such an unknown, we don’t know where he’s going to go and what’s he’s actually going to be able to do. Our response is ‘all people are God’s people … documented or undocumented.'”

Recently the Bishops of the Arizona Catholic Conference spoke out against Trump’s executive orders. A statement it issued calls for immigration reform that will strengthen national security, but will also provide a pathway to legal residency for immigrants who came to the U.S. as children and “know no other country.”

“Focusing on building a new border wall has the potential to take us away from these important considerations that impact vulnerable families and will ultimately be useless,” the statement said. “Pope Francis has called for bridges, not walls, between people.”

Another Tempe church, Community Christian, is displaying a banner outside the church that reads: “Immigrants and refugees welcome.” The banner (which joins a rainbow flag hanging outside the church, welcoming members of the LGBTQ community) was hoisted last December during the holidays.

Community Christian’s pastor, Rev. Doug Bland, says the point of the banner is to show hospitality to refugee and immigrant peoples at a time when a cloud of political uncertainty hangs over these populations.

“One of the major tenets of our faith and scripture is ‘welcome the stranger,'” Bland said. “We think there should be borders, but there are times when we need to welcome people who are in dire straits. And lots of the immigrants in our world today are in dire straits, life and death situations.”

Therein lies the debate; how to accommodate immigrants coming to the U.S. to flee violence or persecution while also maintaining a border and national security. The answer to this issue is unclear, of course, but Ledermann has an anecdote that he said explains the flaw in Trump’s approach.

“There’s a story about all these babies that are coming down river in a basket and this village is going ‘oh my gosh, we’ve got to save the babies.’ They go out and save the babies, but nobody bothers to go upstream and figure out why these babies are in the river to begin with,” Ledermann said.

Trump and members of the Republican party, notably house speaker Paul Ryan, have defended the measures included in Trump’s executive orders as essential, legal functions his administration needs to implement to secure the border.

They say securing the border is essential to preventing future terrorist attacks and to maintain U.S. sovereignty.

Nationally, evangelical churches have formed one of the strongest bases of support for Trump, but even members of the usually strongly-conservative community are split on Trump.

Phoenix World Outreach, an evangelical church with a largely Latino congregation of more than 500 people, has many members unsure or unsupportive of Trump’s measures.

Pastor Maurice Chavez remains neutral when talking politics with his congregation, but explains to them the illegalities of undocumented immigration and the importance of seeing both sides of the issue.

“They have a good understanding that coming across the border is illegal,” Chavez said. “I’ve explained to them that the responsibility of citizenship means paying taxes and contributing to society. “It’s important for us to have immigration reform, but there’s a better way than just a wall.”

“(PWO members) don’t like the idea of the wall,” Chavez added.

Chavez said he thinks there are “way too many” immigrants entering the country illegally, but many are families who came to the U.S. decades ago, not criminals they’re “made out to be,” he said.

Trump last week vowed to do away with the Johnson Amendment, a provision in the U.S. tax code that prohibits all 501(c)(3) non-profit organizations from endorsing or opposing political candidates. Although rarely enforced, the law can remove the tax-exempt status of a church that contributes to a political campaign.

Doing away with the Johnson Amendment may pave the path for liberal and conservative churches to get more openly involved in the political arena. In any case, leaders like Ledermann and Bland understand the church’s role in peaceful political dissent.

“The rhetoric that’s coming out is ‘we’re going to have a fight on our hands'”, Ledermann said. “Our job, as the church, is not to attack Mr. Trump, but to fight for those against whom the system is stacked.”

“I think [the banner] is going to be a forever thing,” Bland said. “It’s not something that we’ll be solving anytime soon.”