Navajo Nation President Russell Begaye told a Senate panel Wednesday that the tribe got passed from agency to agency when it sought federal disaster relief after the Gold King Mine spill in 2015. (Photo by Arren Kimbel-Sannit/Cronkite News) 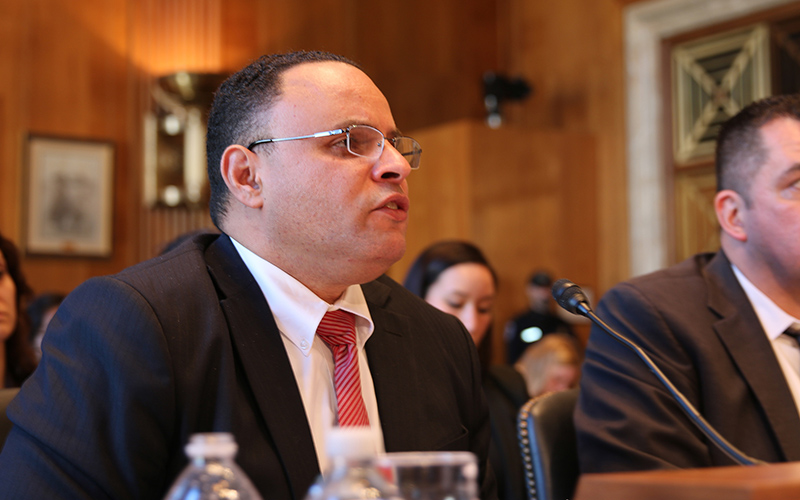 Alex Amparo of the Federal Emergency Management Administration said working with tribes is a commitment at FEMA, but conceded that there is still work to be done. (Photo by Arren Kimbel-Sannit/Cronkite News)

The Animas River runs yellow with some of the 3 million gallons of toxin-tainted water that was accidentally released from the abandoned Gold King Mine near Durango, Colorado, in 2015. (Photo courtesy Colorado Parks and Wildlife Department)

WASHINGTON – Multiple federal agencies were unable to provide disaster relief to the Navajo Nation after the 2015 Gold King Mine disaster that spilled 3 million gallons of toxins into the Animas River, the tribe’s president told a Senate panel Wednesday.

President Russell Begaye said in testimony to the Senate Indian Affairs Committee that when the wastewater flooded homes and farms and contaminated water supplies on his nation, the tribe only got the run-around.

Requests to the Federal Emergency Management Agency, the Agriculture Department and the Department of Health and Human Services for emergency aid were all referred to the Environmental Protection Agency, which ultimately refused to compensate the tribe or any of its members for damages, citing sovereign immunity, Begaye said.

He said the EPA accepted responsibility – one of its contractors caused the spill – and promised to compensate the tribe and its affected members.

“But not a single person has been compensated,” Begaye said. “I believe that is criminal.”

The testimony was part of a larger hearing on FEMA’s intergovernmental relationship with tribal governments in light of a 2013 amendment to the Stafford Act that allowed tribes to request federal aid directly from the president.

“It reflects tribal sovereignty,” said Alex Amparo, the assistant administrator of the recovery directorate at FEMA.

“It’s a part of our commitment to federally recognized tribal governments. But there is still much work for us to do,” Amparo said.

Begaye was one of three tribal leaders who testified to what they called ineffective or nonexistent federal disaster relief efforts on tribal territory. He agreed that the federal government still had a ways to go before he was satisfied with relief efforts.

“We saw the water that flows into our nation turn as yellow as orange juice,” he told the committee.

Begaye his biggest issue was with the red tape that seemed to prevent federal aid to his tribe in the wake of the Gold King disaster.

“All federal agencies should be able to use their resources to help in disasters like Gold King,” he said. “Contaminants are still on the river banks and in the river beds.”

But he said he also wanted to ensure that the Senate committee holds the “EPA’s feet to the fire” over its failure to compensate the tribe.

EPA officials were not at Wednesday’s hearing and were not immediately available for comment, instead pointing to a January statement defending the agency’s position on compensation to the Navajo. That statement said an independent claims officer within the agency decided that the EPA is “not legally able to pay compensation for the claims” citing the Federal Tort Claims Act, which was passed to protect government agencies from lawsuits resulting from the carrying out of their duties.

“Because the agency was conducting a site investigation at the Gold King Mine under the Comprehensive Environmental Response, Compensation, and Liability Act, the agency’s work is considered a ‘discretionary function’ under this law,” the statement said. “Therefore, the circumstances surrounding the Gold King Mine incident unfortunately do not meet the conditions necessary to pay claims.”

According to a 2016 EPA report, the agency has reimbursed $1.6 million in allowable expenses from state, tribal and local governments since the spill, and spent almost $30 million to help with monitoring, water treatment and alternate water and agricultural supplies for the region. The report does not state exactly how much money has gone to the Navajo or to individuals impacted directly by the disaster.

Despite Begaye’s focus on the EPA, senators did not spare FEMA during the hearing.

Begaye told the panel that FEMA claimed it does not typically involve itself in emergency assistance when there is a potential liable party involved – in this case, the EPA and its contractor. But Begaye said that did not stop the agency from responding in incidents like BP’s 2010 spill from its Deepwater Horizon oil rig in the Gulf of Mexico.

“It’s a disaster at the federal agency level,” he said.