After meeting, Flake even more committed to Gorsuch nomination

Supreme Court nominee Neil Gorsuch, a judge on the 10th U.S. Circuit Court of Appeals, meets with Sen. Jeff Flake, R-Arizona, as part of a round of courtesy calls on senators who have to confirm his nomination. (Photo by Tyler Fingert/Cronkite News) 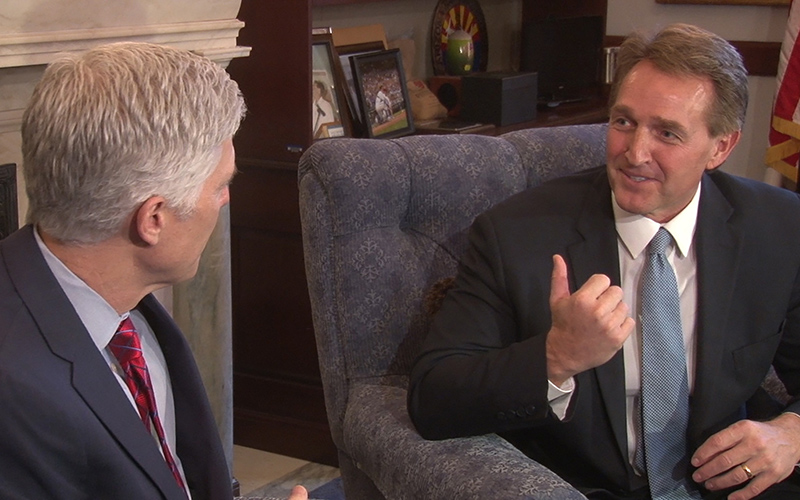 Sen. Jeff Flake, R-Arizona, said he is even more comfortable with the record and temperament of Supreme Court nominee Neil Gorsuch, left, after the two met on Capitol Hill. (Photo by Tyler Fingert/Cronkite News)

WASHINGTON – Sen. Jeff Flake, R-Arizona, has been a supporter of Supreme Court nominee Neil Gorsuch since the nomination was announced last week, but he said he feels even more confident after the two met Wednesday.

Flake and Gorsuch met for about 30 minutes in the senator’s office, the first of seven courtesy calls the judge made Wednesday as he works to smooth the path for his confirmation through the Senate.

“I’ve been a fan of the opinions he’s written and the philosophy he has, and after explaining it again to me, I’m certainly more supportive,” Flake said in a call with reporters after the visit.

President Donald Trump last week nominated Gorsuch to fill the vacancy left by the death last February of Justice Antonin Scalia, a leading conservative voice on the court. Gorsuch’s supporters say his judicial stands mirror those of Scalia, although he is temperamentally more mild-mannered than the sometimes caustic Scalia.

“He (Gorsuch) has a temperament that people like to see, and it’s tough when you look at his opinions to find one that you can really motivate people to oppose him on,” Flake said. “He’s a mainstream pick, and he’s a good one.”

But it’s precisely because of his opinions that many have strongly opposed the nomination of Gorsuch, a Colorado native who is currently a judge on the 10th U.S. Circuit Court of Appeals.

Planned Parenthood said that Gorsuch will be a voice on the court against Roe v. Wade, the 1973 Supreme Court case that recognized a woman’s right to an abortion, instead of a voice to “protect our fundamental rights – including the right of a woman to control her body.”

“There has never been a more important Supreme Court nomination,” said Planned Parenthood President Cecile Richards in a statement after the nomination was announced. “It has become crystal clear that the courts are going to be the last – and sometimes only – line of defense against dangerous and unconstitutional attacks on basic rights.”

Sen. Dianne Feinstein, D-California, the senior Democrat on the Judiciary Committee, pointed to Trump campaign claims that he would quickly reverse Roe v. Wade by filling the Supreme Court vacancy with a pro-life justice.

“Then tonight, President Trump declared, ‘I am a man of my word,'” Feinstein said in a Jan. 31 statement, the night Gorsuch was named. “That’s exactly what I’m afraid of. Judge Gorsuch voted twice to deny contraceptive coverage to women, elevating a corporation’s religious beliefs over women’s health care.”

Flake said he and Gorsuch did not talk about Roe v. Wade, but he believes the judge’s originalist beliefs will lead him to follow the Constitution when considering any abortion cases.

“When you look at his writings in regard to assisted suicide, for example, he makes a very compelling and persuasive case for his beliefs in the intrinsic value of life as a right that the Constitution guarantees,” Flake said. “People can infer from that what they wish, but I don’t know what he would do in that regard.”

Sen. John McCain, R-Arizona, has also cited Gorsuch’s “record of upholding the Constitution and respecting the limited role of the judiciary” in announcing his support for the judge, whom he calls “a fitting choice” to replace Scalia.

Flake, who sits on the Judiciary Committee, which will consider the nomination, said he thinks Democrats will have a hard time turning Gorsuch down.

But Democrats are still smarting from Republicans’ refusal to even grant a hearing last year to Judge Merrick Garland, the man then-President Barack Obama nominated shortly after Scalia’s death. GOP leaders called it a lame-duck appointment and said the choice of a new justice should be left to the new president.

Citing that snub, Rep. Ruben Gallego, D-Phoenix, called last week for Senate Democrats to “draw a line in the sand of the Senate floor” and filibuster Gorsuch’s confirmation.

Feinstein has not explicitly called for a filibuster, but is calling for sufficient review and debate in the Senate before a nominee is confirmed.

“At a time when public trust in our institutions is at an all-time low and our country is bitterly divided, a thorough and fair review is vitally important,” Feinstein said in a statement last week.

Flake called Garland “a good man” and said he was impressed that Gorsuch’s “first call after he was named was to his friend, Merrick Garland, just out of respect.” But he said Democrats would be wise not to halt Gorsuch’s confirmation, in case there is another Trump-era Supreme Court vacancy they have to challenge down the road.

“If I had to guess, I’d say that the Democrats will take the wiser choice and not try to block Judge Gorsuch,” Flake said. “He’s very popular and it would be difficult to do so. I think that they’ll save their fire until the next pick.”

Judiciary Committee staffers said Wednesday that confirmation hearings on Gorsuch would likely not be scheduled until March. Until then, Flake said he likes what he sees.

“He’s an originalist, meaning that he looks at the text of the law and doesn’t try to infer what was intended or the motives of those who are seeking a change,” Flake said of Gorsuch. “He looks at the law and follows it wherever it goes.”