‘King of African Music’ living in harmony in NW Phoenix 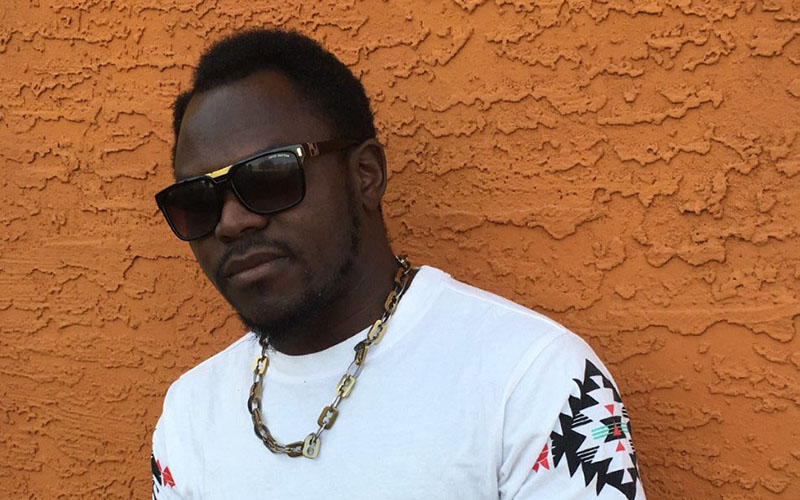 Timothy Zambakari, AKA Advisor Rex T, writes and performs music that speaks to his fellow South Sudanese and their war-torn country. (Photo by Mindy Riesenberg/Cronkite News)

PHOENIX – Northwest Phoenix isn’t known as a hotbed of celebrities, but tucked away in a modest, two-bedroom apartment lives one of the most famous musicians in East Africa.

Timothy Zambakari, known as Advisor Rex-T to his fans, is a 28-year-old refugee originally from Yambio, South Sudan.

Now a green-card holder and aspiring U.S. citizen, Zambakari has embarked on a journey that has taken him from Sudan to Uganda to Phoenix, making pointed statements toward the Sudanese government through his music.

But the only trappings of show business that are apparent in his home are two Arizona African Music Awards sitting on a shelf.

While Zambakari’s two toddler boys run around the living room, he relaxes on a leather sofa and tells the story of his past. 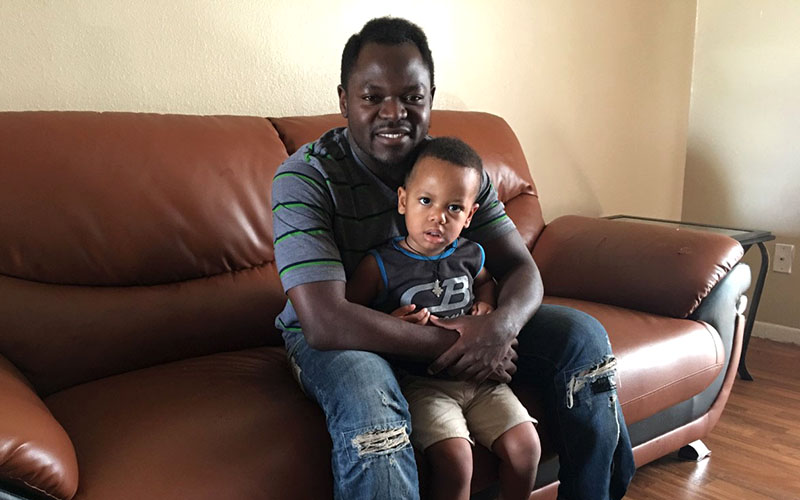 Timothy Zambakari, one of East Africa’s most famous musicians, fled war-torn Sudan and settled in Phoenix, where he is raising his two sons, Romeo (2, seen here) and Aaron (1). (Photo by Mindy Riesenberg/Cronkite News)

When he was around two years old, the civil war in Sudan forced his family to flee the country. His mother and siblings went one direction and Zambakari and his grandmother ended up in Mboki Camp in the Central African Republic. He lived there for about 10 years — void of running water, electricity, or technology.

Residents used music and drumming to communicate across the camp.

“I made my own drums by cutting a tree, getting the skin of an animal, drying it, and tying it to the wood,” Zambakari said. “We used different sounds to communicate news, like if someone had died, we would drum a certain sound. If there was going to be a party, it would be another sound.”

A Christian, he also sang in the camp church choir. Music became integral to his life.

Eventually, Zambakari and his extended family walked for three weeks to cross the border into Uganda, where they settled for the time being since Sudan was still embroiled in a civil war.

It was in Uganda where Zambakari found his voice as an artist.

“I felt bad for my country, so I did a song called ‘Mama Sudan’ about how mothers feel seeing their children killing each other,” he said. “The mother cannot eat, she cannot even sleep because of the bloodshed.”

Through a friend’s connection to a recording studio, Zambakari recorded the song, singing and playing the drums and keyboard. It landed on the radar of expatriate South Sudanese living in Uganda. He was asked to perform it at a graduation ceremony at Kampala International University. Dignitaries, including the first lady of Uganda, were in attendance. The song gained widespread exposure for its anti-war theme.

When the Comprehensive Peace Agreement (CPA) was signed by the Sudan People’s Liberation Movement and the government of Sudan in 2005, Zambakari wrote a song called “Message,” directed at his South Sudanese brethren.

“I told them to unite among themselves and that the youth should go to school because we can’t do better if we are illiterate,” he said.

But the song also advised politicians to stop their corruption and tribalism, and to think about the people of their country.

“In the video I say, ‘Hey, politician, put your mind on the benefit of the people!'” he said. “I was very angry and was revealing what was hurt in my country.”

Zambakari recorded several albums while living in Uganda, gaining a reputation as an outspoken East African musician who wasn’t afraid to speak his mind.

In 2010, after many years of paperwork and processing, Zambakari arrived in Phoenix, where his mother, two brothers and two sisters had already journeyed. More than 2,500 Sudanese refugees have settled in Arizona since 1980, according to the Arizona Refugee Resettlement Program.

The next year, a referendum took place on whether or not South Sudan would break away from the north, creating a new country. Zambakari was inspired to write a new song, “Vote for Separation.”

“I wanted to send a strong message right away to the South Sudanese, to convince them that it was important to separate,” he said.

Zambakari was able to get some South Sudanese leaders to participate in the video for the song. The opposition, however, wasn’t amused, and the video’s YouTube posting received numerous threatening comments.

Sudanese refugees living in the U.S. were able to vote on the referendum in eight cities across the country, including Phoenix. “Vote for Separation” was played in the local polling station as people arrived to cast their ballots. The referendum passed, and South Sudan became an independent republic in July 2011.

But the Republic of South Sudan took a turn for the worse once more in 2013 when tribal and ethnic disputes erupted in another civil war.

Zambakari, who had been so hopeful about peace, wrote “South Sudan Unity” to try to dissuade the fighting, which was even bleeding over into the different tribes that had settled in Phoenix.

“I say we’re all one South Sudan,” he said. “Let’s stop discrimination and tribalism and be one people!”

He was invited to perform the song at a Phoenix Sudanese event, where he brought the tribal elders onstage with him and helped to reunite the community.

“He has done so much for Sudan as a whole,” said Yori Haddis, an African concert promoter in Phoenix. “He doesn’t divide people or nationalities, and he’s supportive of other cultures and countries in Africa. That’s why every time Sudanese in Phoenix have an event, they choose him to perform.”

In the U.S., Advisor Rex-T is known as the “King of African Music.” But his day job isn’t music anymore, it’s driving 18-wheelers.

“When I first arrived, I worked in a hotel, I trained dogs, and tried to do different things,” he said. “Now, I get to travel the states and meet people.”

He is also working on non-political music with other Phoenix musicians, and performs across the country. He sings in seven languages and started a production group called Promised Land Entertainment that works with dancehall, reggae, and Afro-beat musicians.

The new restrictions on immigration that President Donald Trump recently signed into order include his home country of Sudan. Zambakari said he believes that Trump is making a mistake.

“Trump is talking about bad people, and that’s not all of the South Sudanese,” he said. “It makes Americans look bad and may put them in more danger.”

He was scheduled to host some Sudanese musicians in Phoenix, but now they are unable to come to the U.S.

He added, “I call Trump a comedian, but when he starts signing things, the comedy is becoming real.”

Zambakari said he hopes one day to use his earnings from both trucking and music to go back to South Sudan and build a school, a hospital and a farm.