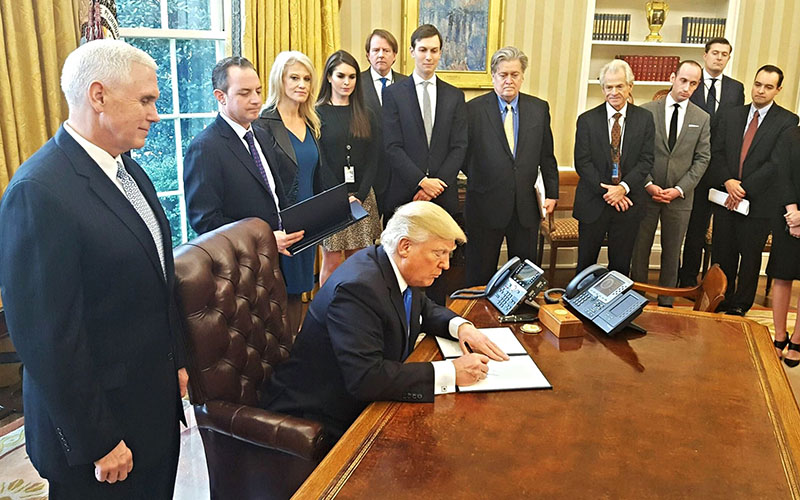 President Donald Trump signed 18 executive orders or policy directives in his first two weeks in office, including a temporary freeze on federal hiring that has agencies scrambling to figure out how to comply. (Photo courtesy the White House)

WASHINGTON – Worried that President Donald Trump’s freeze on federal hiring might include firefighters during wildfire season, some Arizona lawmakers wrote to federal agencies this week to make sure firefighters would be exempt.

They needn’t have worried: It turns out that firefighters are exempt, along with military, emergency workers and others, according to the president’s order and to guidance this week from the Office of Personnel Management.

With almost 500 vacant federal jobs in Arizona currently, many in the Department of Veterans Affairs, agencies are grappling with who’s in and who’s out. And lawmakers are keeping a wary eye.

The hiring freeze was signed by Trump Jan. 23, just days after he took office. It called for an “across the board” freeze on federal hiring for 90 days to give the Office of Management and Budget time to develop a plan to shrink the federal workforce through attrition.

But it excluded military personnel, jobs deemed necessary for national security and exemptions determined by OPM where necessary.

Despite the list of exemptions, an official with the American Federation of Government Employees said the freeze can only hurt services at agencies like the VA.

Marilyn Park, a legal representative for the AFGE, pointed to the long patient waiting lists that landed the Phoenix VA hospital in the news.

“Well guess what, you just made that wait longer,” she said of the freeze.

Park said the freeze hits an agency that struggled in the past but had been “inching” toward improvement.

“Phoenix really brought the situation to the forefront and highlighted the starving staff and resources that they were forced to stretch,” Park said of the VA in the Valley.

But Paul Coupaud, an official of the Phoenix VA Health Care System, said the agency will “continue to function as best as it can.” He said last week that the VA in Arizona had scores of openings and that officials were waiting to hear from upper management to see if they could proceed on those openings.

But the freeze has drawn critics from the other side who say there are too many exemptions.

Dan Mitchell, a senior fellow at the Cato Institute, is one of those critics who believes the freeze to be more symbolic than real.

“If the Trump people said, ‘We want to shut down this program or we want to cut this agency by 50 percent,’ they would take it serious,” he said of Washington bureaucrats. “But these noises about hiring freezes don’t mean much to them.”

“The only way to reduce federal funding is by actually reducing the size of the government,” Mitchell said.

But Sen. Jeff Flake, R-Arizona, called Trump’s order as a step toward reducing unnecessary federal spending, even as he called for exemptions for firefighters. Flake had written to the acting secretary of Agriculture on Wednesday to ask for that exemption.

“I am glad the president is taking action to rein in excessive government bureaucracy while looking out for public safety,” Flake said in a statement released by his office after it became clear that firefighters would not face a freeze.

Flake’s letter to Agriculture came the same day that Rep. Krysten Sinema, D-Phoenix, wrote the acting director of OPM to raise concerns about a hiring freeze as the wildfire season approaches. She was joined in that letter by Rep. Tom O’Halleran, D-Sedona, Republican Reps. Trent Franks of Glendale and Andy Biggs of Gilbert, and five others.

“Arizonans know too well the devastating effects wildfires have on our communities,” Sinema said in a statement prepared by her office. “Firefighters protect our families, homes and businesses, and a federal hiring freeze seriously threatens Arizona’s public safety.”

Tom Crosson, the chief of public affairs at the National Park Service, later said that the freeze will not apply to firefighters, pointing to the OPM guidance exempting the hiring of seasonal employees.

Of the roughly 500 vacancies in Arizona listed on USAjobs.gov, a government website, 367 were from a handful of department: Defense, Health and Human Services, and Veteran Affairs.

For now, Coupaud said the VA is adequately staffed and he is not worried about a delay on people getting hired.

“Of course, people can still leave the VA and that could put us in a more challenging position,” he said.