Tapping I-10, I-17 ‘spine’ to add bicycle crossings, ease commute

PHOENIX – The most heavily traveled freeways in the Phoenix area are proposed for a billion-dollar upgrade, relieving stress and traffic congestion for drivers, bicyclists and light-rail riders.

About 40 percent of daily freeway traffic in the Valley moves along the “Spine,” named for the traffic stuffed from Interstate 17 near north Phoenix and stretching through the Valley’s core into Interstate 10 in the southeast Valley, according to local transportation experts.

Bob Hazlett, senior engineering manager for Maricopa Association of Governments, which is overseeing the proposed improvements in the regional study, is more polite. 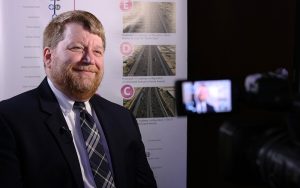 “We call it the ‘Spine’ because it’s the central nervous system of our freeway network,” Hazlett said.

The upgrade could be called the spinal tap, with transportation planners diagnosing needs through 2040. MAG is working with federal highway officials and the Arizona Department of Transportation on the $1.4 billion plan. Funding would come, in part, from sales tax and federal funds, Hazlett said.

Proposals include adding nine crossings for bicyclists and pedestrians and expanding 11 others, expanding and improving carpool lanes and traffic interchanges, and building four light-rail stations.

New technology will improve traffic flow, planners said. The plan even includes strategies for inventions that are not yet fully in play, such as self-driving cars.

The plan also includes a recommendation of an additional lane going in each direction along the 31-mile corridor.

MAG conducted several public hearings to ask people what they thought of the plan and any changes they would like to recommend. The hearings are over but residents can still weigh in on the website.

Commuter Delia Mitchell said she takes the bus because there’s “too much traffic, a lot of accidents” on the freeway. The improvements would help her “get to work a lot faster.”

Frequent commuter Sergio Perez, who lives in downtown Phoenix, said he likes the idea of light rail expansion but thinks it would be better in areas other than those planned because they could displace people who are homeless.

“It doesn’t seem like it would help the traffic,” he said, but rather seemed like a “social engineering” initiative.

Phoenix Mayor Greg Stanton said the improvements would be an economic and lifestyle boon.

“This is really the future of the city and how we get people from point A to point B: to work, to school, to play, to church, to the grocery store,” said Stanton, who chairs the MAG Regional Council of public officials. “That’s what really affects people’s day-to-day lives.”

Hazlett said the goal is to have the recommendations adopted into the Regional Transportation Plan.