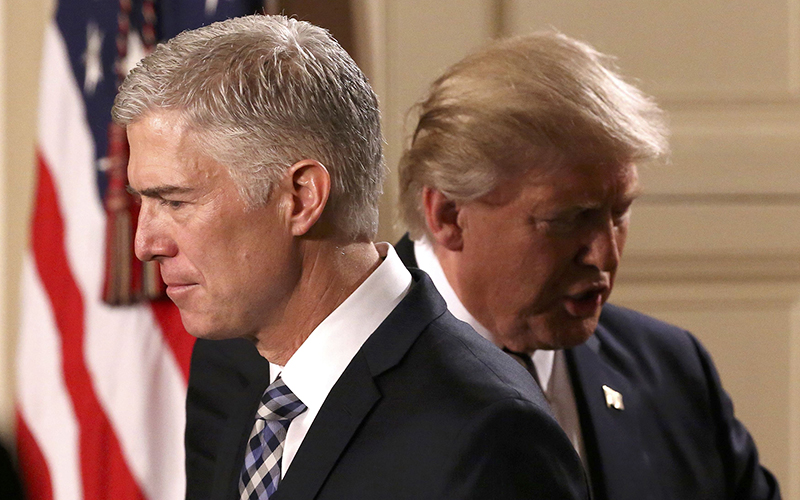 President Donald Trump introduces Circuit Judge Neil Gorsuch, left, whom he has nominated to a vacant seat on the Supreme Court. Trump had promised during teh campaign to name a judge in line with the conservative approach of the late Justice Antonin Scalia. (Photo by Carlos Barria/Reuters) 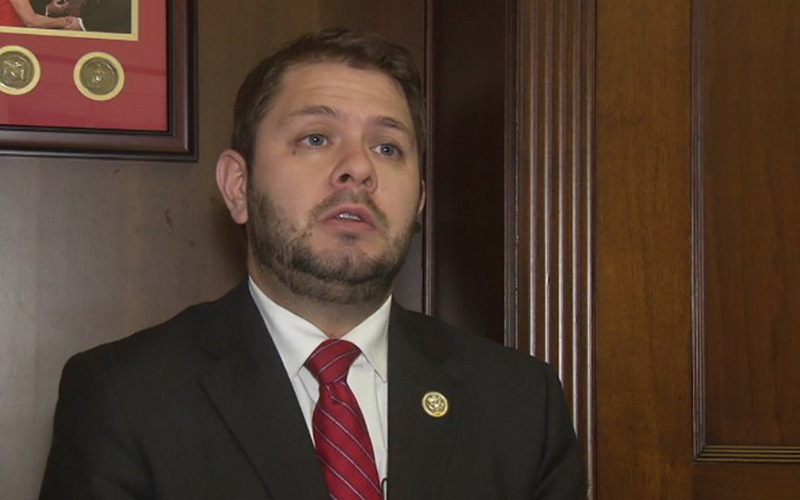 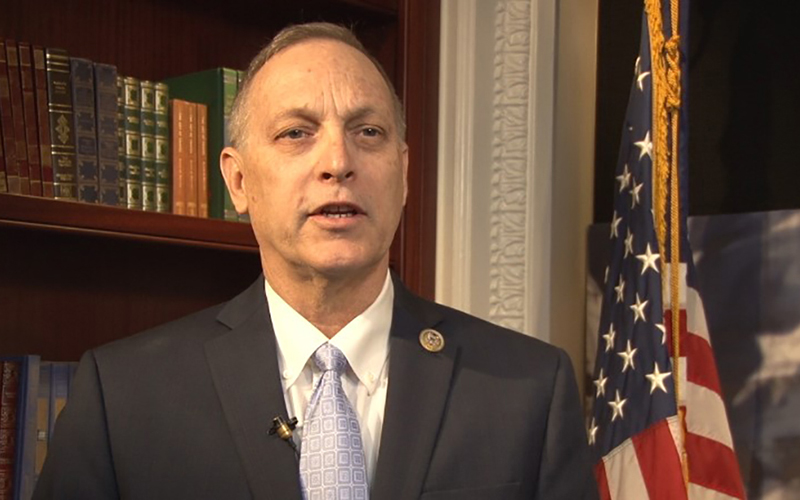 Rep. Andy Biggs, R-Gilbert, welcomed the Supreme Court nomination of Judge Neil Gorsuch, whom he called “very brilliant on the law,” and said he hopes for a confirmation vote by the Senate despite talk of a possible Democratic filibuster. (Photo by Marisela Ramirez/Cronkite News) 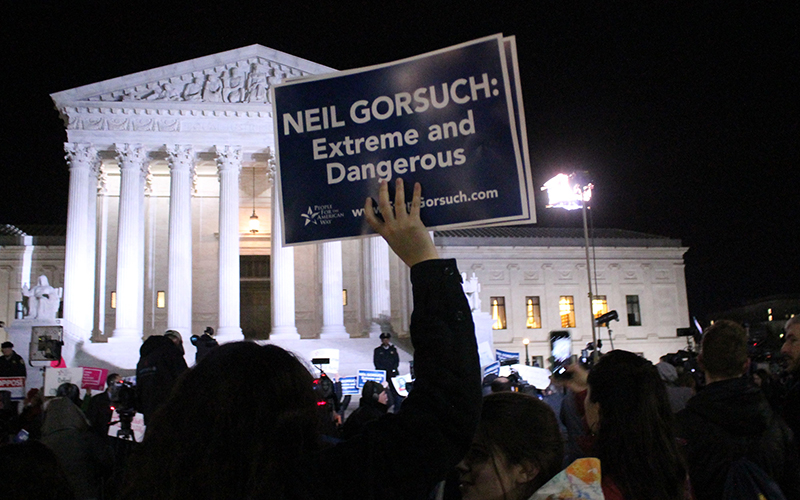 Crowds gathered outside the Supreme Court on Tuesday after President Donald Trump announced his choice of Circuit Judge Neil Gorsuch to take the place of the late Justice Antonin Scalia, a like-minded conservative jurist. (Photo by Elvert Barnes/Creative Commons)

WASHINGTON – Arizona Republicans hailed Supreme Court nominee Neil Gorsuch on Wednesday as a “brilliant” legal mind who can be expected to respect the Constitution if he is confirmed to replace the late Justice Antonin Scalia.

“If” being the operative word, as at least one Arizona Democrat is urging senators to block the Gorsuch nomination that was announced Tuesday night by President Donald Trump.

But even legal experts who differ politically with Gorsuch, a strong conservative jurist, said he will be up to the job of replacing Scalia.

“Judge Gorsuch would not have been my choice because I am a liberal Democrat and I would want someone with quite different opinions on lots of issues,” said Robert Glennon, Regents’ Professor at the University of Arizona’s James E. Rogers College of Law.

“That being said, he does seem to have a lot going for him,” Glennon said. “He’s the kind of person who knows the name of everyone in the building and knows when a family member is ill, and that goes a long way for me.”

Trump had promised during the campaign to appoint a replacement who would follow in the footsteps of Scalia, long a leading conservative voice on the court. The president described Gorsuch, a judge on the 10th U.S. Circuit Court of Appeals, as a jurist with a “superb intellect, an unparalleled legal education and a commitment to interpreting the Constitution according to its text.”

More than one supporter made the comparison between Scalia and Gorsuch in describing the nomination.

“His record of upholding the Constitution and respecting the limited role of the judiciary makes him a fitting choice to fill the seat held by the late Justice Antonin Scalia,” Sen. John McCain, R-Arizona, said in a statement released by his office.

In an apparent reference to the possibility that Senate Democrats may try to block the nomination, McCain said he has supported Supreme Court nominations from both political parties, and he plans to do the same this time around. He said he thinks Gorsuch’s “impressive legal background and judicial career” make him a qualified candidate.

“Filling Justice Scalia’s seat with a principled conservative who will interpret the Constitution rather than legislate from the bench should be our top priority,” Flake said in a prepared statement. “I am confident that Judge Neil Gorsuch fits the bill, and I’ll do whatever I can to see that he receives an up or down vote on the floor of the Senate.”

But some critics have pointed to the Senate’s refusal to consider President Barack Obama’s nominee to replace Scalia, Judge Merrick Garland of the U.S. Court of Appeals for the District of Columbia Circuit. Garland was nominated March 16 but Senate Republicans refused to even hold a hearing, saying the appointment should be left to the next president.

Rep. Ruben Gallego, D-Phoenix, said the Democratic response to the GOP then was “weak and ineffectual” and must be “strong and unwavering today.” He called for Senate Democrats to “draw a line in the sand on the Senate floor” and filibuster Gorsuch’s nomination.

Protesters turned out to rally at the Supreme Court shortly after Tuesday’s announcement. Rep. Andy Biggs, R-Gilbert, said he chalks the protest up to “the divided nature of the country, but I’m hopeful that in the end you’ll see 60 votes in the Senate to confirm Judge Gorsuch.”

“One of the marks of a genius, somebody who’s really brilliant, is you’re able to take complex issues and communicate those to people in a broad way, and his opinions read like that,” Biggs said of Gorsuch’s legal writing.

Glennon said he does not expect much change in the direction of the court, since Gorsuch shares Scalia’s conservative legal outlook. He thinks the main difference between the two will be their writing – he believes Gorsuch will write with a nicer tone.

“It’s going to be refreshing because he doesn’t seem to be a man who is mean-spirited,” Glennon said. “Scalia wrote often with a pen that was dripping with sarcastic ink, often targeted at his fellow judges. Across our civic space, we’ve lost a lot of civility.”

But Glennon said the most important thing Gorsuch will bring to the court for Arizonans is a Western voice that has been missing since the retirement of Justice Sandra Day O’Connor, an Arizonan.

“Once we lost Justice O’Connor, we haven’t really had anyone who’s a true Westerner,” he said. “This is a fellow who’s a fourth-generation Coloradan, he’s been on the bench in Colorado for a while, so when you think about the Supreme Court discussing Western issues, I think having someone who understands the role of public land and has experienced the land is important.”

“I think he offers a different perspective,” Glennon said, “and it’s a perspective that’s been missing.”