They made the most of their time, hitting hotspots such as Tombstone, Tucson, Apache Trail and Camelback Mountain.

They said they enjoyed Arizona with its unique landscape full of saguaro cacti, sprawling desert and imposing mountains. And although it wasn’t a long stay, they savored giving themselves a little time to breathe.

Unlike Sorensen and Ottosen, most Americans don’t give themselves that extra time to take a break.

Last year, 55 percent of American workers didn’t use all their vacation time. They left 658 million vacation days on the table, resulting in $61.4 billion in forfeited benefits, according to research by Project Time Off, a U.S. Travel Association initiative.

This culture of work martyrdom has prompted a nationwide effort on Jan. 31, called National Plan For Vacation Day.

Organizers want Americans to declare their vacation days for the rest of the year.

According to research by Project Time Off, if Americans had used all of their vacation time in 2015, it would have meant an additional $223 billion in spending in the U.S. economy. In Arizona, experts estimated vacationers would provide a $1.5 billion boost for the travel economy.

Taking time off isn’t exactly something that comes easy to American workers.

Many workers find it challenging to leave work because of fears about work pileup, financial constraints and challenges it poses for career advancement, according to Project Time Off.

Victoria Phillips, an industrial organizational psychologist and professor at Arizona State University, acknowledges those as real concerns as well.

“There are costs of taking time off,” Phillips said. “They have the stress of preparing for the vacation and then the stress of all the things to handle when they get back.” 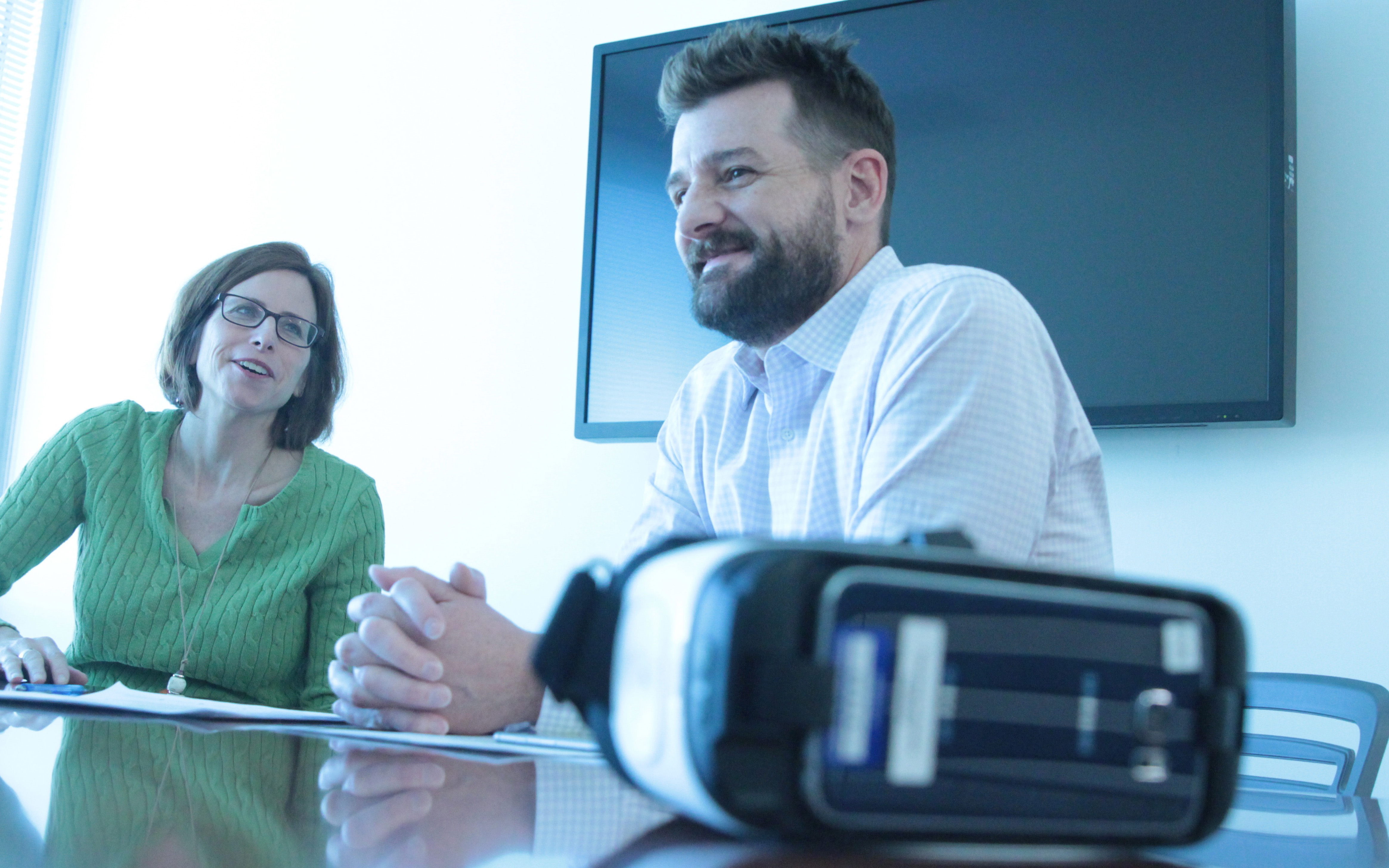 Jamie Daer and Scott Dunn with the Arizona Office of Tourism discuss their virtual reality experience, which simulates mountain biking in Sedona and skydiving at the Grand Canyon. (Photo by Erica Apodaca/Cronkite News)

Working in uncertain economic conditions, a lack of internal support from coworkers and leadership, a reluctance of managers to use their own vacation time and an expectation to always be connected, all can influence worker willingness to take vacation time.

She added that this reluctance to take time away comes at a cost. Researchers are exploring its impact on productivity and psychological and physical health.

“We know that if you are not taking that break, your body can’t operate under that stress for too long without there being consequences,” she said.

Phillips said changing American work culture will come down to economics and worker demand. Essentially, if companies can see a return on investment – such as increased productivity or a reduction in employee health care costs – they may be more likely to push vacation programs.

And in sectors where the demand for high-level workers is more competitive, companies may need to offer vacation programs to attract talent.

The state’s Office of Tourism office is using social media, articles and blog posts to encourage Arizonans to take at least one vacation locally, and officials hope to draw interest both locally and nationally.

But for the Office of Tourism, local travel is just an added bonus.

“We like to say our customers don’t live here, tourism is actually an export industry,” spokesman Scott Dunn said. “Those are dollars outside our state. They’re coming in from other states, other countries and funneling that money into our economy.”

“For a state like Arizona, it is a boon,” he added.

In 2015, 42.1 million visitors spent $21 billion in the state and generated nearly $3 billion in tax revenues. Officials expect 2016 numbers, which they haven’t released, to surpass the previous year.

The 360-degree experience, designed by filmmaker Shaun MacGillivray, simulates what it is like to go mountain biking in Sedona and skydiving at the Grand Canyon.

Officials plan to share these experiences with the public and make them playable on any virtual reality headset.