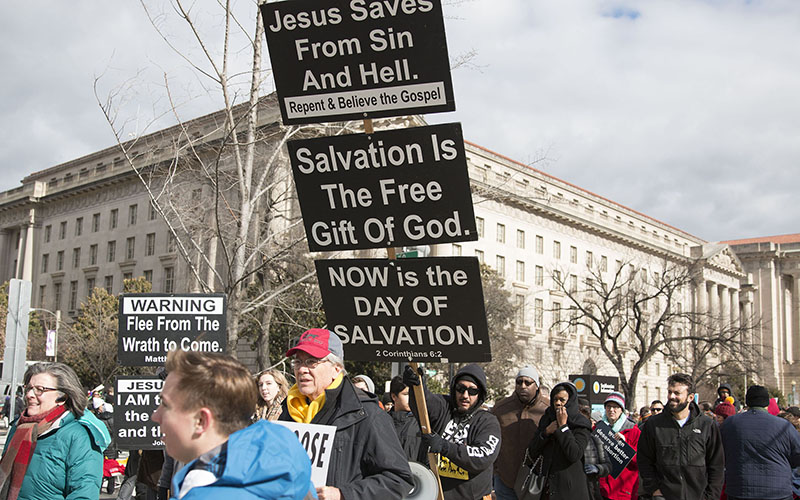 Thousands marched down Constitution Avenue to the Supreme Court in an upbeat March for Life, the 44th since the high court recognized a right to an abortion. (Photo by Bo Tefu/Cronkite News)

Many of those in Friday’s March for Life were millennials, students and young parents who called themselves members of “Generation Life” for their convictions. (Photo by Bo Tefu/Cronkite News) 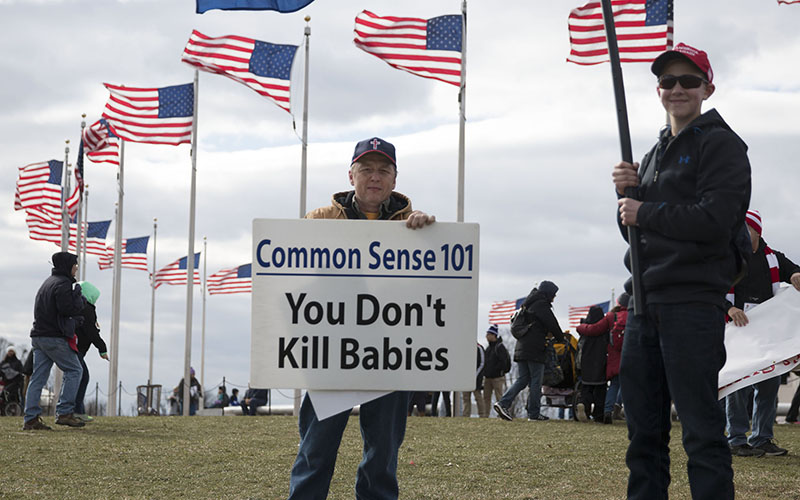 March for Life protesters said they hope for a change in abortion laws, now that the White House and both chambers of Congress are controlled by Republican. (Photo by Bo Tefu/Cronkite News) 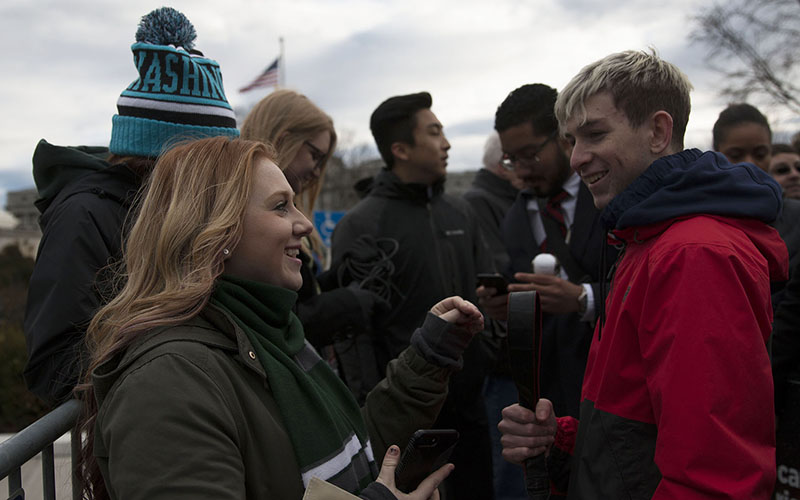 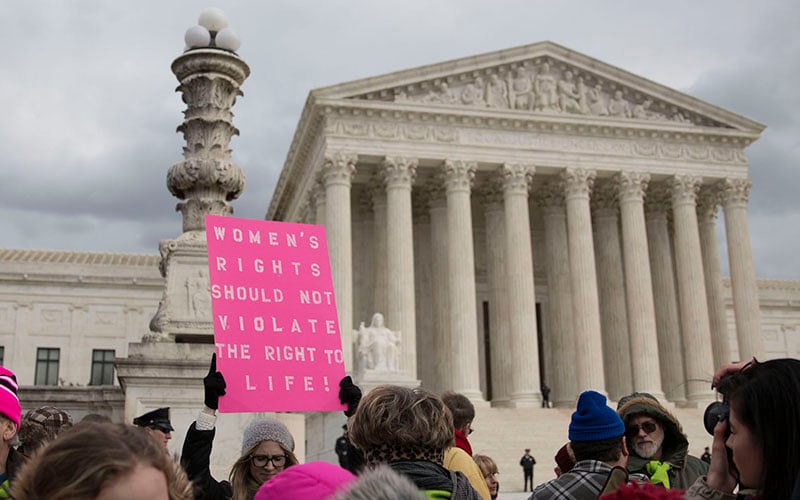 The Supreme Court handed down its decision in Roe v. Wade, recognizing a right to an abortion, in late January 1973 . The march marks that anniversary. (Photo by Bo Tefu/Cronkite News) 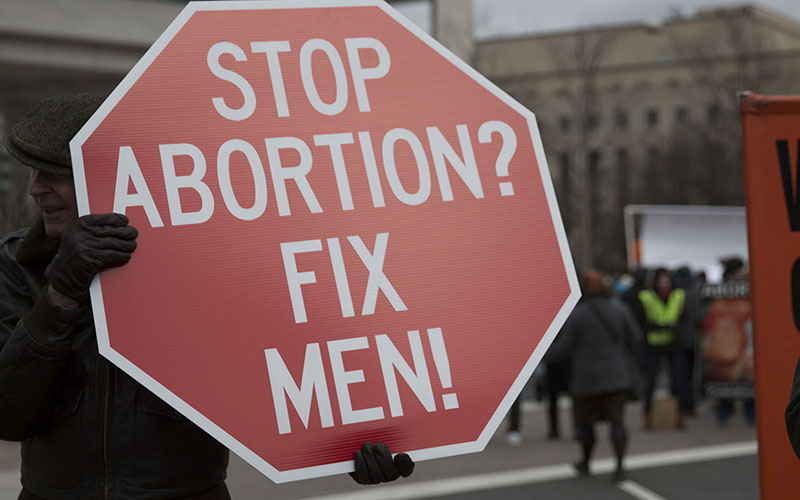 The March for Life came less than a week after the Women’s March on Washington, an anti-Trump event where pro-life protesters said they were not welcome. (Photo by Bo Tefu/Cronkite News)

WASHINGTON – Paula Mercado, 18, has prayed at Planned Parenthood facilities and taken part in anti-abortion protests in Arizona, but Friday found the Tucson teen on the National Mall with thousands of others pro-life protesters, many of them millennials.

“This is very important, and nobody seems to wake up and notice that,” Mercado said of the fight against abortion. “They’re leaving people, millions of people, babies without their fundamental rights here in the United States.”

Many in the crowd for the 44th annual March for Life were like Mercado, young and mostly upbeat, with many expressing hope that after decades of protesting the Supreme Court’s Roe v. Wade ruling recognizing a right to an abortion, a win may be on the horizon.

Calling themselves the “pro-life generation,” they were part of a crowd of tens of thousands that marched from the Mall to the Supreme Court, chanting and singing religious songs, waving signs to mark the anniversary of the court’s decision.

There was little sign of opposition to the march and plenty for marchers to be optimistic about. The White House and both chambers of Congress are in Republican control and Vice President Mike Pence told the crowd that President Donald Trump plans to nominate a Supreme Court justice next week “who will uphold the God-given liberties enshrined in our Constitution.”

One of Trump’s first executive orders was the reinstallation of the so-called Mexico City Policy, which bans federal funding of organizations that provide or promote abortions, and Pence said the administration would work to “end taxpayer funding for abortion and abortion providers.”

Those in the crowd gave high marks to Trump’s actions in his first week in office.

“I really think that he is going to help defund Planned Parenthood and save millions of lives in the process,” said Susan Subia, a former Glendale resident, who was at the march with her daughter, Mary. “He’ll do a great job.”

Mary Subia said she wants Trump to get rid of abortion and thinks “that he can do that this presidency. Defunding Planned Parenthood is just the first step.”

Mary said the cause is personal for her. “My father wanted to abort me and then my mom left – I wouldn’t be here today if she wasn’t as strong of a woman as she is,” Mary said outside the Supreme Court, as her mother stood nearby.

Mary and her mom encourage mothers facing difficult pregnancies to rule out abortion and get help.

“It’s just awful that we’ve put forth abortion as a solution,” said Amelia Irvine, a Georgetown University student from Gilbert who was at the march. She said she considers abortion a human rights issue and a women’s rights issue, because she feels abortion traps women into a corner.

“The reason why women have abortions is because they haven’t been supported in other ways,” Irvine said. “They feel like they’re unable to support their children.”

There is other good news for pro-lifers in Arizona, where statistics from the Arizona Department of Health Services show the number of abortions dropped 1.9 percent from 2014 to 2015, the most recent year for which figures are available.

Gabriel Buckholz-Casao, a college freshman from Tucson, said he thinks declining abortion rate in Arizona is “a trend that’s going to continue.”

Buckholz-Casao believes abortion is wrong and he felt a responsibility to come out and “do something about it” by marching in solidarity with pro-life supporters.

“I came out here because I believe in a better quality of life for people and everybody deserves a chance – abortion is wrong,” he said outside the high court.

As the crowd approached the Supreme Court, they stopped for a silent prayer for the nation on a cold and windy January afternoon in Washington. Protesters grew somber and were silenced by the explicit images of dismembered fetuses and abortion horror stories shared by young women who spoke.

This year’s march came less than a week after the massive Women’s March on Washington last Saturday, which drew hundreds of thousands who were protesting Trump’s inauguration. But while many in Friday’s crowd consider themselves pro-woman, they said they were put off by the pro-choice message of the other march – and its explicit rejection of pro-life feminists.

“There’s this stigma around our generation about not offending people,” said Marisa Putrasahan, a Georgetown freshman from Phoenix who was marching with Irvine. “But it’s important to speak about what you believe in.”

Despite the hope that many have because of the Republican control in Washington, Javier Lopez from Phoenix tempered other marchers’ optimism with a look back at the last four decades.

“They say Republican politicians are going to change it, but then they get in and nothing changes,” Lopez said. “It’s been going on for a long time, and yet nothing has changed.”

But Buckholz-Casao looks to the future, when he expects the March for Life will be “getting bigger and bigger” every year.

“Possibly in the next 10 years we can see abortion completely gone,” Buckholz-Casao said.

“We’re the pro-life generation,” he added. “Hopefully, we’re the generation that has the power to do something about this.”