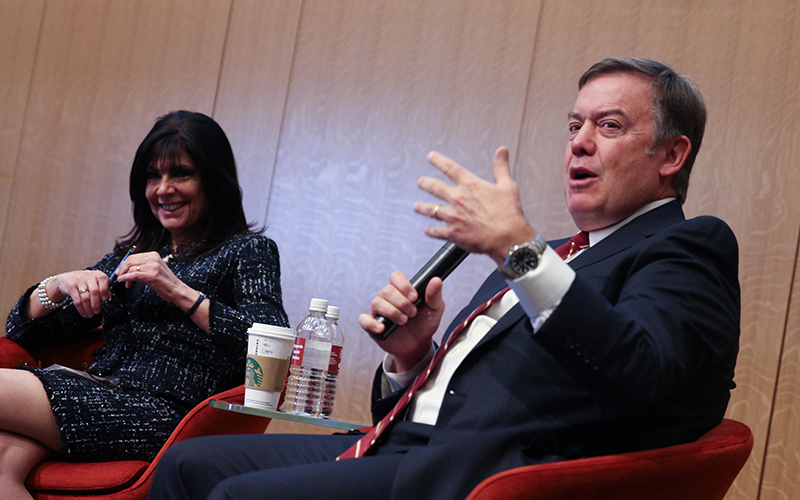 Maria Harper-Marinick, chancellor of Maricopa Community Colleges, and Michael M. Crow, president of Arizona State University, spoke about the intersection of higher education and the economy in Arizona at Gateway Community College on Tuesday. (Photo by Erica Apodaca/ Cronkite News)

But the state lags behind educational achievement.

“Arizona needs a prepared workforce,” Harper-Marinick said. “Only 42 percent of 25 to 64 year olds have college credit.”

The two leaders spoke at Gateway Community College in Phoenix as a part of the Greater Phoenix Chamber of Commerce Valley Voices series. They discussed the intersection of higher education and the economy.

However, many people have sought alternatives to college degrees given how student loan debt has ballooned. In fact, only about 38 percent of graduates who received their degrees between 2006 and 2015 strongly agreed that their education was worth the cost, according to results of 30,000 alumni polled by Gallup-Purdue Index in 2015.

Crow said Arizona is underprepared when it comes to the future.

“Rigid old models and programs keep us from succeeding,” he said. “We are working vigorously at ASU to produce more learners.”

Harper-Marinick said she believes that something deeper might be at fault.

“It’s not a lack of talent or brainpower, but institutionalized racism and biases in high schools,” she said in reference to the number of Latino Americans dropping out of high school and lack of Hispanics pursuing college.

At 12 percent, the national Hispanic dropout rate remained higher than that of blacks (7 percent), whites (5 percent) and Asians (1 percent) in 2014, according to the Pew Research Center. However, the Pew report also pointed out that the dropout rate for Hispanics has dropped dramatically, and the Hispanic population also has made “big inroads” in college enrollment.

The Maricopa County Community College Chancellor said that neither schools nor businesses can move the Arizona economy forward without working together.
“Support public education. That is what makes America great. A robust education means a robust economy,” Harper-Marinick said.