Rep. Raul Grijalva, D-Tucson, hosted a ‘listening session’ to discuss what the future of Medicare, Medicaid and Social Security might look like under a Trump administration, in Tuscon, Arizona, on Friday, Jan. 20, 2017. (Photo by Johanna Huckeba/Cronkite News) 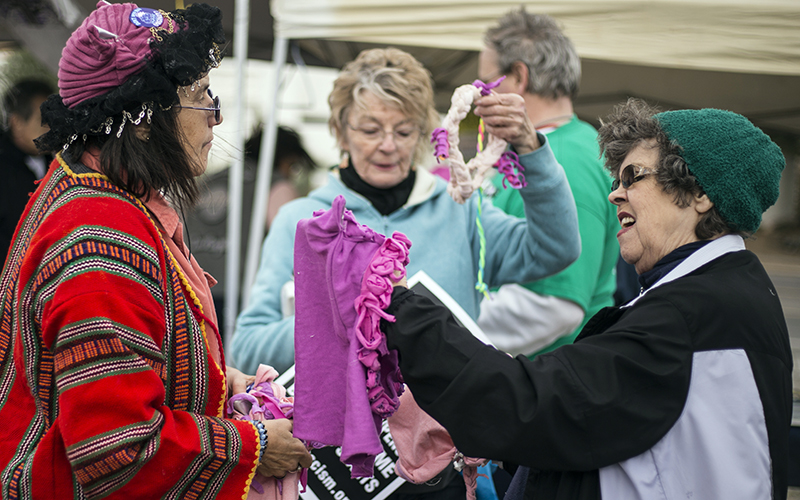 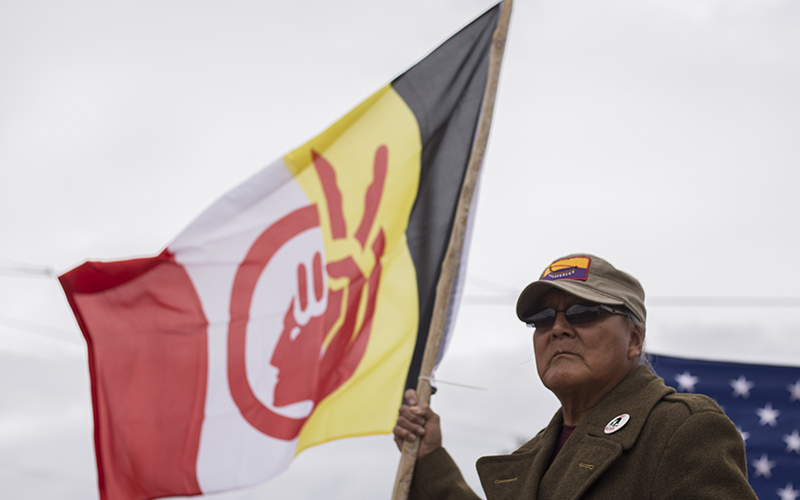 David Garcia stands holding the flag of the American Indian Movement during a gathering of social activists in Tucson, Arizona, on the day of President Donald Trump’s inauguration. (Photo by Johanna Huckeba/Cronkite News)

TUCSON – While the fanfare of Donald Trump’s inauguration engulfed Washington, D.C., in a swathe of traditions and “Make America Great Again” hats on Friday, Rep. Raúl Grijalva watched the ceremony alone from his office a couple thousand miles away.

“I was waiting for a respectful, inspirational, powerful tone,” Grijalva said of Trump’s inauguration speech. “I don’t expect Trump to shy away from what he believes, but I did expect an olive branch, and that didn’t happen.”

The Tucson Democrat was one of the first members of Congress to announce he would not attend the inauguration. Another 66 Democratic lawmakers boycotted the event, including Rep. Ruben Gallego, D-Phoenix. The majority of Pima County, of which Tucson is the seat, had voted for Hillary Clinton, and Grijalva has been supported by many of his constituents – though not all – for his decision to stay home.

“I have constituents who have called who totally disagreed with me,” he said. “They felt it was my obligation to be there and be a unifier, to show respect. I think respect is a two-way street.”

Shortly after the inauguration ended, a group of about 200 activists began to gather near a Latino neighborhood to bear signs with slogans like, “Not my president.” They were scheduled to march to deliver a letter to the mayor’s office requesting that Tucson become a sanctuary city, that doesn’t prosecute undocumented immigrants.

“I’m blind, I can’t walk, but I can talk,” she said, an “Equality” sign strapped to her walker. “We need to stay organized. We need to get political. We need to open our mouths. We need to march every week.”

Others said there was a sense of dread in Tucson, coupled with division.

A few blocks away, Grijalva went out of his office for a smoke break, only to end up in an impromptu mini town hall discussing how to combat climate change under the new administration, according to his spokesman.

In the afternoon he held a “listening session” for senior citizens to discuss their concerns over how changes to the Affordable Care Act could affect their health insurance.

“Tucson is very passionate about their politics, very passionate about things they believe in,” he said after the meeting ended. “Just like in Phoenix and other parts, what you sense is, honestly, anxiety and a degree of fear about what’s going to happen next. So all these meetings are about not reassuring people that nothing is going to happen, but trying to motivate people to do something about it.”

Among Grijalva’s other concerns for Trump’s first 100 days are that Trump could repeal Deferred Action for Childhood Arrivals, former President Barack Obama’s executive order that allows undocumented immigrants who were brought to the U.S. as minors to avoid deportation.

The border wall, Grijalva said, isn’t practical for a “no deficit Congress” because of its multi-billion dollar estimated cost. His district touches the Mexican border from Nogales to California.

“I think (Trump’s immigration rhetoric) affects the state, country, our values, where our priorities are if we’re really talking about the border,” he said. “There’s more symbolism there than there is an effective enforcement strategy. And I think just the tone of his announcement when he descended from Trump Tower stairs or the escalator and the comments he made about immigrants, in particular Mexicans, kind of set the tone and he hasn’t backed away from it.”