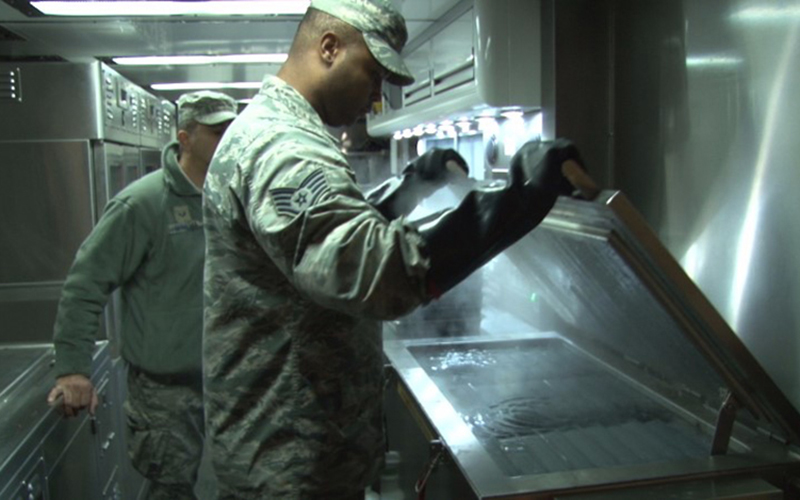 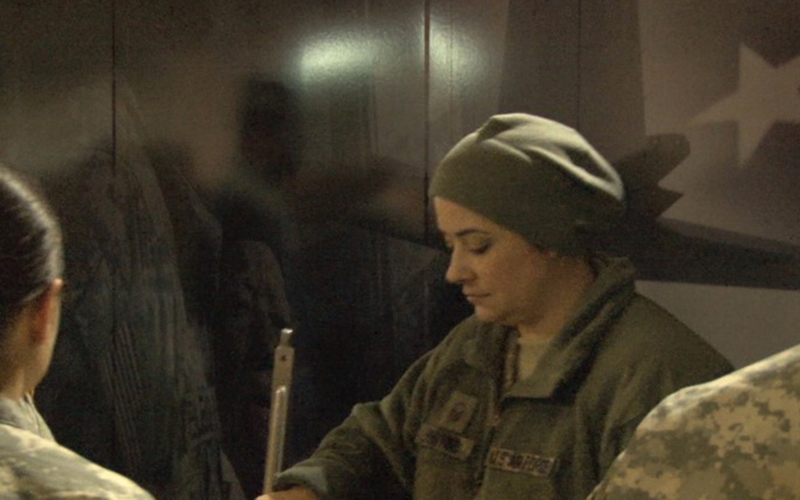 Master Sgt. Jennifer Fostino, on of the 17 members of the Arizona Air National Guard helping serve meals to other officers in Washington for inaugural security. (Photo by Ziyi Zeng/Cronkite News) 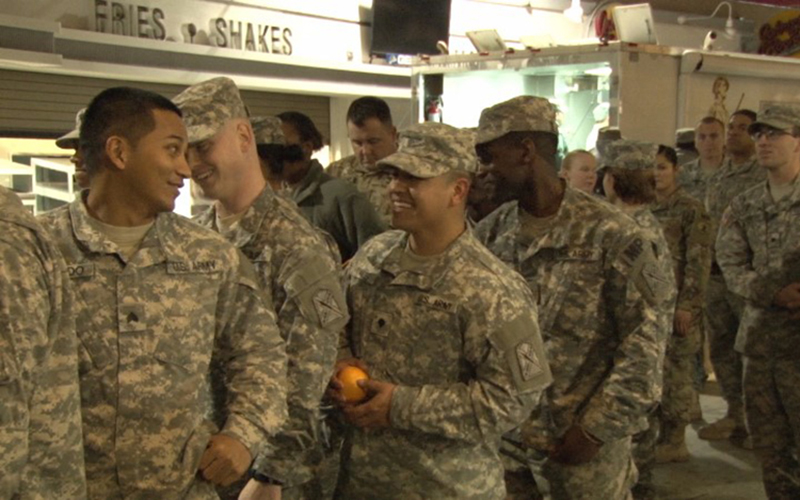 Soldiers line up for a meal on the concourse of FedEx Field, where National Guard units have set up kitchens to feed the thousands here to provide inaugural security. (Photo by Ziyi Zeng/Cronkite News)

WASHINGTON – Thousands of cots line the suite-level hallways of FedEx Field, temporary housing for 3,500 National Guardsmen from around the country who are here as part of a contingent of 7,500 guardsmen helping provide security for Friday’s inauguration.

Someone’s got to feed all those guards based at FedEx. That’s where Arizona comes in.

For the second inauguration in a row, members of Arizona’s Air National Guard are volunteering in Washington, armed with ladles and spatulas rather than special police badges.

“I’m honored to be here,” said 1st Lt. Susan Gladstein of Phoenix, one of 17 Arizona guardsmen who is helping prepare thousands of meals a day from mobile kitchens set up in a stadium concourse.

“It’s absolutely worth it, being with people who have such a genuine sense of patriotism,” said Gladstein, who is at her first inauguration.

When they were here for President Obama’s last inauguration in 2013, the Arizona soldiers were responsible for preparing all three meals each day for the soldiers that were here.

Due to higher security concerns surrounding the inauguration of President-elect Donald Trump, however, more guardsmen have been brought in this year. The higher number of soldiers means Arizona is now only responsible for one meal a day, with units from other states taking the lead on the remaining meals.

“I came to the last one, and this one’s more controversial, with more to secure,” said Master Sgt. Jennifer Fostino, also a Phoenix resident. “Everything is on a much larger scale.”

The meals, known as Unitized Group Rations or UGRs, are similar to frozen TV dinners. They are frozen into blocks, which are then immersed in hot water to cook before being served buffet-style to the guards. The process takes about 45 minutes per meal.

Each meal has a main course, some sides and a dessert. Wednesday night, it was spaghetti and meatballs with string beans, pears and cake.

“Usually in the field, we’re stuck eating MREs (Meals Ready to Eat),” Gladstein said. “This is a step up from MREs.”

Fostino said helping for the Inauguration is a fun way to “get involved in something bigger than yourself,” and provides an opportunity for National Guard units from different parts of Arizona to come together for some camaraderie while helping fellow soldiers in the process.

“The 161st and 162nd don’t team up often,” Fostino said of the Arizona units working the kitchen detail at FedEx Field, “but we love it when we do.”