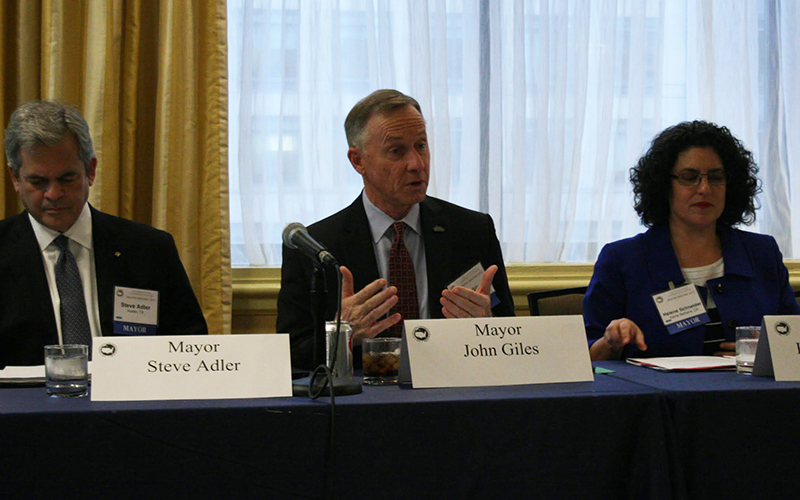 Mesa Mayor John Giles, speaking at a conference of mayors in Washington, D.C., said his city’s efforts to help homeless veterans have brought it close to ‘functional zero’ for the number of vets in need of shelter. (Photo by Joseph Guzman/Cronkite News)

WASHINGTON – Mesa’s efforts to get homeless veterans off the street is closing in on “functional zero,” Mayor John Giles told an audience of fellow mayors in Washington Tuesday.

Giles, speaking at a panel at the U.S. Conference of Mayors winter meeting here, said the city has found housing for 125 vets since first lady Michelle Obama issued a challenge to mayors in 2014 to end the problem of veteran homelessness. Giles said it was a rare bipartisan success from Washington.

“I am personally not a very partisan person,” Giles said during the mayors’ meeting. “I’m registered as a Republican and I come from a very red state, so all the great programs that the White House was encouraging us to participate in, I knew would have some trouble getting traction back home.

“The obvious exception to that was the Mayors Challenge to End Veteran Homelessness and I recognized immediately that that was an issue in my community,” he said.

Mesa accepted the first lady’s challenge in 2015 and partnered with various human services agencies in the city to help tackle the issue. Giles advised other mayors that their greatest ability is to convene and bring all the organizations at their disposal together.

Austin, Texas, Mayor Steve Adler agreed that local governments cannot take care of the problem on their own.

“In Austin, we have been able to house close to 400 veterans and earn the designation of functional zero, and that was solely based on organizing and rallying to raise money outside of government through local businesses in our community,” Adler said.

The Department of Housing and Urban Development gives cities the “functional zero” designation when they meet strict criteria in relation to permanent housing placement for veterans, the length of time vets are homeless and the number of homeless in the community.

Giles added that very few communities that have participated in the program have met the criteria to be considered a function zero city. He noted that although Mesa has made significant strides in housing homeless veterans it has yet to be designated a functional zero city.

“It is just a flash in the pan unless we create an organization that can sustain that effort, we have to make sure that there is a safety net put in place,” Giles said.

“We’ll say we’re functional zero, which means our list is empty, but it is very difficult for Phoenix and Mesa to meet the criteria because they are both such transient cities with large populations of people moving in and out of them daily,” Giles said.