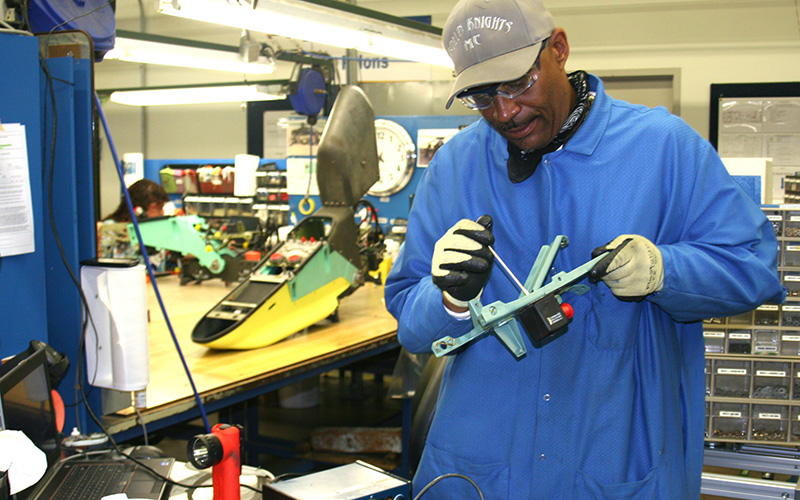 A worker at Boeing’s plan in Mesa assembles a pylon to hold weapons on the Apache helicopters built and refitted there. Defense work is a significant part of the state’s economy. (Photo by Sarah Pringle/Cronkite News)

WASHINGTON – Defense businesses in Arizona that have been hit hard in recent years by a downturn in contract spending are looking to a Trump administration for possible relief – but experts said that could take years to arrive.

Even if President-elect Donald Trump can work with Congress to fulfill campaign pledges, he likely will not be able to build a budget “from the beginning” until 2019, one expert said.

Hopes for help from Trump come as defense contracts have fallen by billions in the state, and by tens of billions nationally.

Nationally, spending on defense contracts fell from $362.9 billion to $290.5 billion during the same period, according to the data.

Experts blame much of the drop on budget sequestration, a 2012 agreement that automatically cuts defense and domestic spending if lawmakers are not able to approve a balanced budget for the year.

“Sequestration is not a positive for industry nationally and for the state,” said Garrick Taylor, the senior vice president of government relations and communications for the Arizona Chamber of Commerce and Industry.

Taylor said Arizona is a strong player in the defense industry and has definitely felt the drop in contract spending. But, he said, state businesses have also found ways to adapt.

He pointed to drone research and manufacturing as areas where state defense contractors have seen changes.

Trump, who will be sworn in as president on Jan. 20, said during his campaign that he wants to “work with Congress to fully repeal the defense sequester and submit a budget to rebuild our depleted military.”

Taylor said any increase in defense spending would benefit business in the state.

“The industry is a major economic driver that means greater job creation in a sector of the economy that is known for attractive, high-paying jobs,” Taylor said.

But getting agreement between the Pentagon, the White House and Congress on increased military spending could run into hurdles, particularly when it comes to the sequester, analysts said.

“The 2018 budget request, I expect it to be little higher than what the Obama administration was planning, but I don’t think it will be a great departure,” said Roger Zakheim, a partner in the Washington law firm of Covington-Burling.

“The budget caps are already in law, they remain in place through FY 2021, the entirety of Trump’s first term in office,” said Todd Harrison, a defense budget expert at the Center for Strategic and International Studies.

Harrison, speaking at a Washington panel with Zakheim and others, said Trump will first have to “strike a deal with Congress” on the defense budget. Trump won’t have a real opportunity for a large change anytime soon, he said, and likely will not be able to build a budget “from the beginning” until 2019.

“He is going to be running up against a hard reality,” Harrison said.