While there are federal laws concerning gun-free zones in schools, many states and local boards have their own laws and policies. Arizona school officials leave the decision to local boards. (Photo by Marcus Quigmire/Creative Commons) 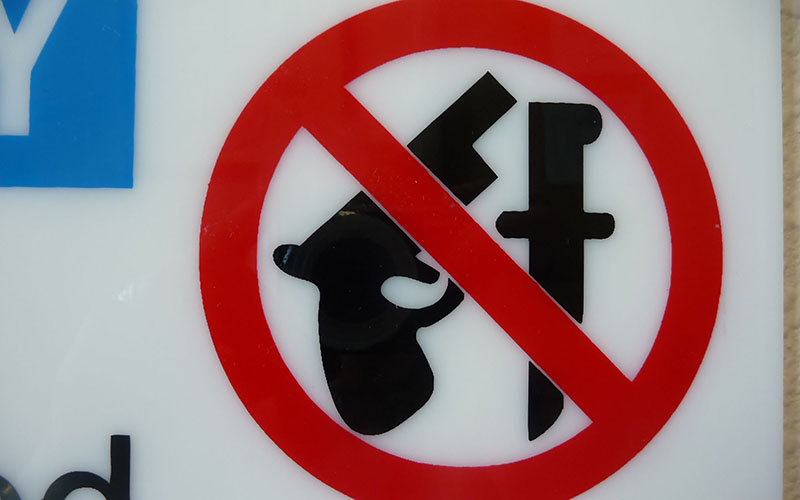 One of President-elect Donald Trump’s campaign promises was to do away with gun-free zones in schools, but that may be easier said than done because of the layers of laws involved. (Photo by Michelle Ress/Creative Commons)

“I don’t support disarming those who defend children and students and I support rights to keep and bear arms,” said Heller, the co-founder for the Arizona Citizens Defense League.

But Heller acknowledges that legal and political realities will likely keep Arizona schools gun-free for the foreseeable future.

“The problem is the Republican Arizona Legislature, which refuses to budge on the problem,” Heller said.

It’s not just the Legislature: Because of overlapping federal, state and local laws on gun-free zones, it would not be legally possible for a president to dismantle all gun-free zones with the stroke of a pen, said George Washington University law professor Robert Cottrol.

Trump promised that he would sign an executive order doing away with guns on military bases – “my first day it gets signed, OK?” – and said he wanted to do away with such zones entirely. But in later interviews, Trump conceded that he would have to work with states to make it happen elsewhere.

“There are some places where a president could, by executive order, end a gun-free zone,” Cottrol said. “On military bases, for example. However, school gun-free zones would have to be changed by an act of Congress.”

Cottrol said the school zones act does give states “some ability to authorize individuals to possess firearms on school grounds. So while the president can’t directly do anything he could encourage states to change their laws.”

The Arizona Department of Education does not have an official stance on firearms in schools, said spokesman Charles Tack. He said in an email that Superintendent Diane Douglas “is a firm believer in local control and would support allowing schools to make their own decisions on how best to ensure the safety of their students and staff.”

“Personally, the superintendent believes that allowing properly trained school staff members to possess firearms on campus could help them protect themselves and their students in the event of an emergency,” he wrote.

But that cannot happen without an OK from a local school administrator, a restriction that Heller said “infringes on Arizonans’ right to keep and bear arms,” particularly those with concealed-carry permits.

“Our group, Citizens Defense League, and the NRA has brought forward bills to the legislature before,” he said. But those measures have failed, which is why Heller does not predict Arizona laws will change in the near future.

“Anyone, I mean anyone, who opposes the lawfully armed defense of children is promoting evil … I repeat that: evil,” Heller said.

Trump made a similar argument in a May interview with CNN.

“The problem with gun-free zones is it’s like offering up candy to bad people,” he said. “They hear gun-free zones and they go in there with their guns blazing.”

“There is just no evidence to show that repealing those laws or requiring that guns be allowed into schools keeps people safer,” said Hannah Shearer, a staff attorney at the Law Center to Prevent Gun Violence, citing a John Hopkins University study that concluded allowing firearms on college campuses will lead to more violence, not less.

“The Second Amendment is not threatened by sensible laws,” Shearer said. “And the U.S. Supreme Court held in D.C. v Heller that ‘laws forbidding the carrying of firearms in sensitive places such as schools and government buildings’ are constitutional.”

An official with the state chapter of the American Federation of Teachers said allowing – or encouraging – guns in schools “could really scare some students.”

“It’s different when a school resource officer or a police officer has a gun on campus because they’re in uniform and students understand that,” said Misty Arthur, executive director of AFT Arizona. “But allowing anyone to have a gun? I don’t see that there could be any good.

“And I’m a Republican, I believe strongly in the Second Amendment,” Arthur added. “But I believe it would bring more chaos, not protect the children.”

In a post-election update of what he plans to do in his first 100 days, Trump did not mention gun-free zones.

Even with a Republican-held Senate and House in Washington, “it would certainly be a fight,” Cottrol said. “And the question for any president would be: Where do you place your priorities?”