PHOENIX – Ana Leon is building a new life in Phoenix with her five children, far from the violence she experienced at the hands of their father.

“The children arrived with psychological problems, traumatized,” said Leon. Their father abducted the two youngest children by force, according to Leon. She said she was beaten and left on the street and did not see the kids for more than a year.

Once she tracked them down, Leon said, “I quickly took them all and ran to the border.”

They crossed into Nogales, Arizona with just the clothes on their backs. Some of the children are U.S. citizens. 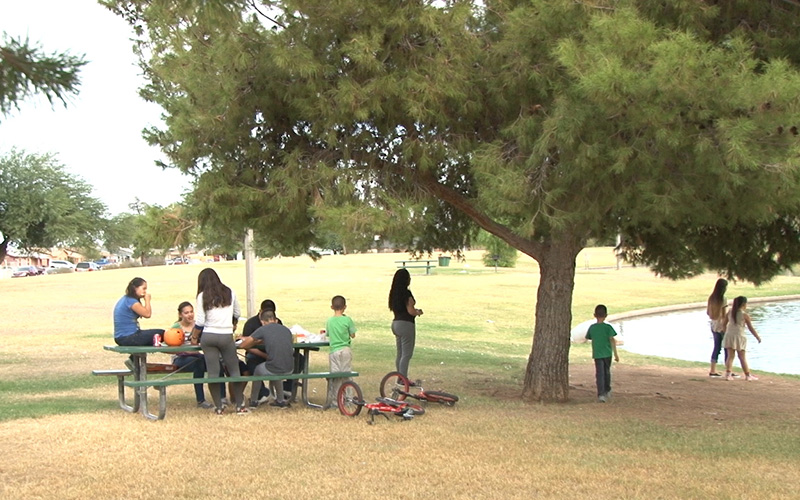 Ana Leon, with her children spending time at park in Phoenix. Leon, a domestic violence survivor, is rebuilding her life. Photo by Yeimi Flores. (Ana Leon at the park pic)

“Two of my children were born here, that’s why I asked for help in the U.S. I knew if I stayed in Mexico their dad would have taken them again,” said Leon.

One out every four women in the United States has experienced domestic violence and immigrant women face additional hurdles finding help. “So a lot of the times the abusers have either residency or citizenship and the women don’t so the abuser holds that against them and says ‘I’m going to report you. I’m going to have you deported,'” Gerardo Pena Director of De Colores.

The shelter helped 527 survivors of domestic violence last fiscal year and relies on grants and private donations. Most of those who arrive asking for help are women, many with children. But De Colores also helps men who have suffered physical abuse.

Some immigrants at De Colores may qualify for a U-Visa “for victims of certain crimes who have suffered mental or physical abuse and are helpful to law enforcement or government officials in the investigation or prosecution of criminal activity,” according to the United States Citizenship and Immigration Services description.

Congress created the U visa with the passage of the Battered Immigrant Women’s Protection Act in October 2000, and the U.S. government approved more than 17,000 U visas this past year.

Leon has applied for a U visa and is waiting for an answer. In the meantime, she’s sharing her story to encourage other victims to seek help.

“I feel very proud of myself for giving my children a better life and being able to do it on my own,” said Leon.