PHOENIX – Maricopa County Sheriff Joe Arpaio stood in a cold parking lot outside Park Central Mall on Monday evening and presided over one of his last press conferences.

The conference was billed as a gathering in which Arpaio would say goodbye to posse members charged with protecting holiday shoppers.

But the focus of the event sometimes shifted from the posse to the 84-year-old sheriff’s reflections on 24 years in office. He was sometimes jovial, sometimes defiant, sometimes pensive. Some posse members held back tears as he spoke.

“This is my last hurrah as Sheriff,” Arpaio told Cronkite News after the event.

In January, Arpaio will no longer have authority over the 23-year-old posse he founded when he took office in 1993, handing over the controversial volunteer program to newly-elected Sheriff Paul Penzone, who defeated Arpaio as he battled legal problems, including a racial profiling ruling and a criminal contempt of court charge.

“I don’t care about legacies and all that, but one thing I am proud of is that nobody is going to beat my record of 24 years in the environment of the third largest sheriff’s office in the country,” Arpaio said.

Arpaio wouldn’t comment on the posse’s future under Penzone.

Stacy Pearson, Penzone’s spokeswoman, said Penzone plans to expand the posse because it is a “tremendous resource” to the community.

“We have a new sheriff in town,” posse member Bill Crawford told Cronkite News after the press conference.

“We’re hopeful this is a positive change,” he said.

The posse once had 3,000 volunteers, the sheriff’s website previously reported. But today it has 768 active members, according to Doug Matteson, a spokesman for the Maricopa County Sheriff’s Department. Besides protecting shoppers, posse members provide medical rescue and emergency response services, while others cover geographical areas like Sun City.

Critics have accused Arpaio of using the posse for publicity stunts that raised money for his campaign.

The next year, Arpaio announced his posse would patrol Maricopa County schools following the Sandy Hook shooting. He enlisted the help of action star Steven Seagal, who took part in a training exercise in a Phoenix school simulating a mass school shooting scenario.

But the sheriff told Cronkite News that he used publicity “to report to the people” about the posse’s activities.

He said the posse’s duties aren’t just “bells and whistles” to get publicity, and asserted at the press conference there is a “rationale” behind every policy he enforces. 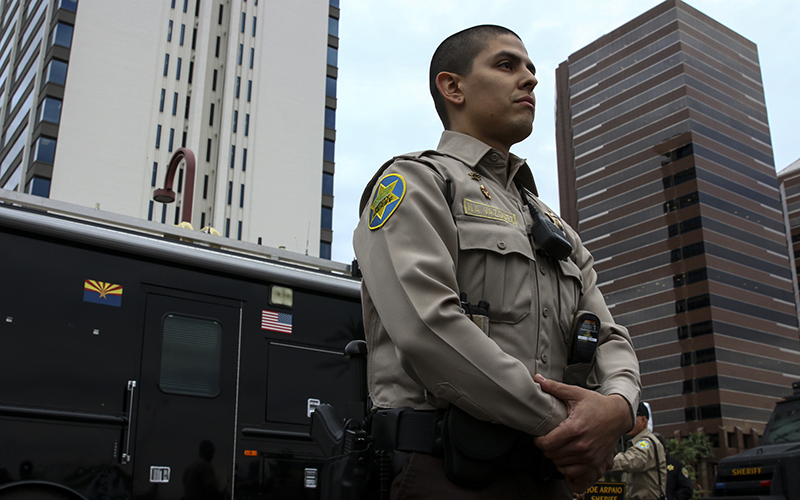 Niko Vazquez, 26, a volunteer member of the Maricopa County Sheriff’s Posse, spoke positively about his posse service at a press conference near Park Central Mall on Nov. 28, 2016. (Photo by Danielle Quijada/Cronkite News).

Niko Vazquez, 26, who has been a posse member for about three years, said many of the controversies throughout Arpaio’s time in office were “blown out of proportion” and the good that came out of his office was overlooked.

Vazquez said he is “very hopeful” the posse program will continue.

Arpaio said the year before he formed the posse, there was “a lot of violence at the malls.” He formed a “mall patrol” posse in 1993. Since then, crimes in malls under the posse’s watch have generally been lower, said Matteson, the MCSO spokesman.

“To me this is a very important program,” Arpaio said. Having the posse’s presence at malls allows shoppers to feel safe especially during the holidays.

Arpaio has long said he got the idea for forming the posse from Westerns he watched as a kid in Springfield, Mass. Instead of rounding up horse thieves, some in Arpaio’s modern-day posse publicly helped round up animal abusers, drug pushers, deadbeat dads and, critics said, undocumented immigrants – until Arpaio’s immigration enforcement was halted by a federal judge.

Arpaio appeared to have no regrets on Monday evening. He had a job to do, he said, and he did it.