A sign hangs in the offices of the Arizona Coalition to End Homelessness. (Photo by Tyler Petersen/Cronkite News)

On June 22, 2010, during President Obama’s second year in office, his administration unveiled a plan to end specific types of homelessness in the United States, with an initiative called “Opening Doors.” One of the main goals of the plan was to end homelessness for the nation’s military veterans by 2015.

That plan has not succeeded. As of January 2016, the U.S. Department of Housing and Urban Development estimated there were 39,471 veterans without permanent housing across the country, including 1,036 who were unsheltered or living in temporary housing in Arizona.

“Arizona has been on the forefront of a lot of things of veteran homelessness,” said Shane Groen, director of special projects for the Arizona Coalition to End Homelessness and Navy veteran. “I think we’ve done some really great things and some things right. We’ve struggled in the last few years which has been frustrating.”

Now, advocates in Arizona are reflecting on lessons learned in the past five years and are developing a new plan to end veteran homelessness for good.

The plan, which was meant to run for five years, focused on three areas of need: ending chronic homelessness, increasing the capacity of the temporary help system and preventing further homelessness among veterans.

Overall homelessness in AZ has fallen 30 percent since 2010

Many of the aims of the project were achieved in Phoenix, which reached “functional zero” for chronically homeless veterans in late 2014, the first city in the U.S. to do so. Those veterans who experienced long and reoccurring bouts of homelessness were all able to receive the necessary assistance so they would be able to get back on their feet.

Brad Bridwell, who worked for AZDVS when the Action Plan was drafted, lauded the efforts and accomplishments of the past five years.

“It was very successful,” he said. “At our baseline when we started the project we had 222 known and identified chronically homeless veterans on the street…Through Project H3 Vets, we were able to reduce that number from 222 to just 18 in those two years. That’s the point at which we declared functional zero.”

That doesn’t mean every homeless veteran in Phoenix was able to find permanent housing, but rather that they were able to break the cycle of homelessness so that if they experienced it again, it would only be for a short period of time before it could be resolved.

Project H3 Vets is one of many ongoing initiatives organized by AZCEH, which is a housing assistance program coordinated with community partners. Executive director Joan Serviss said it had a tremendous impact on reaching functional zero in Phoenix. She stressed the importance of “providing somebody a home, they address their health and hope for the future.”

The most recent estimate of homeless veterans in Arizona came from point-in-time counts that take place each January. They involve on-the-ground surveying of both street-living and temporarily-housed homeless veterans throughout the state.

“The 1,000 figure for the whole state of Arizona feels doable,” said Serviss. “You just need to put all the resources together and get all the people aligned. That is the part that gets a little more hairy.”

Shane Groen said a lack of data sharing between organizations makes the effort to end homelessness “profoundly more difficult than a lot of people feel it should be.”

The organizations that work in the homeless community often have separate sets of records rather than one shared data pool. Agencies are sometimes unwilling to share information because of the risk involved in passing along sensitive information of clients, usually pertaining to medical privacy, according to Groen.

“I believe that the resources are there,” he said. “In a perfectly aligned system with data sharing and where we’re all working collaboratively, we would be making better progress than we are.” 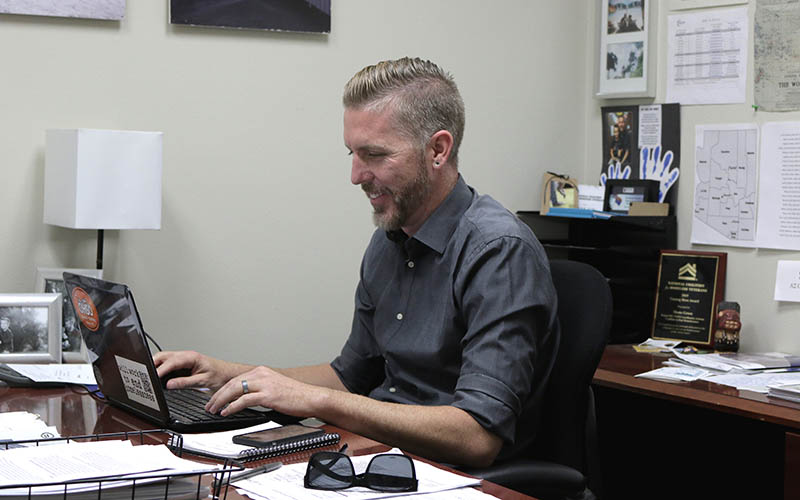 The original Arizona Action Plan has reached the end of its tenure, and local groups are now finalizing a second one. There is new understanding about best practices and solutions to combat veteran homelessness.

Among the goals, Brad Bridwell stressed, “We want to make sure veterans are able to enter and exit very quickly to permanent housing, inside of 90 days.”

According to Bridwell, the plan is scheduled to come out in January and will focus on “eliminating street and shelter-level homelessness,” “transforming the temporary help system” and creating “sustainability.”

“This is really about getting everybody on the same page and moving in the same direction toward collective impact on these statewide community goals,” Bridwell said.

AZCEH is working on a continuous network that can quickly support any veteran in need.

“What we want is a turning system that when somebody falls on hard times, you can get them quickly assessed, quickly resources and services to them and have them quickly on their feet,” Serviss said.

Because of the nature of homelessness, akin to that of unemployment, there is not a finite end to the work organizations do. Groen described it as “an ongoing issue” but said he feels proud of the progress that has been made.

“We’ve shortened the time it takes to get someone from the streets into housing, we have a rapid-response system, rental assistance intervention…there are a lot of different resources that are in place, so I think we’ve made a lot of progress and prevented a lot of people from becoming homeless,” he said.

Arizona could become the third state in the nation to declare an end to veteran homelessness. Bridwell said it’s “certainly possible to finish the job.”