PHOENIX — It’s noisy, cramped, and tires are piled high up to the ceiling in the waiting room at Mil Amores, but none of that matters to customers who’ve come to the shop looking to save money and their tires.

Mil Amores, which translates to a thousand loves, is open 24 hours a day. The small tire shops, known as llanteras in Spanish, are common in Latino neighborhoods but attract customers from all backgrounds looking for a deal. “It’s fast, very convenient, and very affordable,” said Duey Brown. He’s been coming to Mil Amores for about five years.

The shop opened in 1986 and the business is so successful several employees left to start their own tire shops, according to manager Rodolfo Chacon. “In the last ten years, we’ve seen tough competition. There are about 20 llanteras from 7th Avenue to 43rd Avenue,” said Chacon.

The tire shops see a spike in business starting with Thanksgiving travel. “During the holiday season, several people come to check their tread and air pressure when dash lights come on and they want to make sure their tires are up to par because low tires cause blowouts,” said Matthew Byrda, manager at L&J’s Tire and Wheel shop. 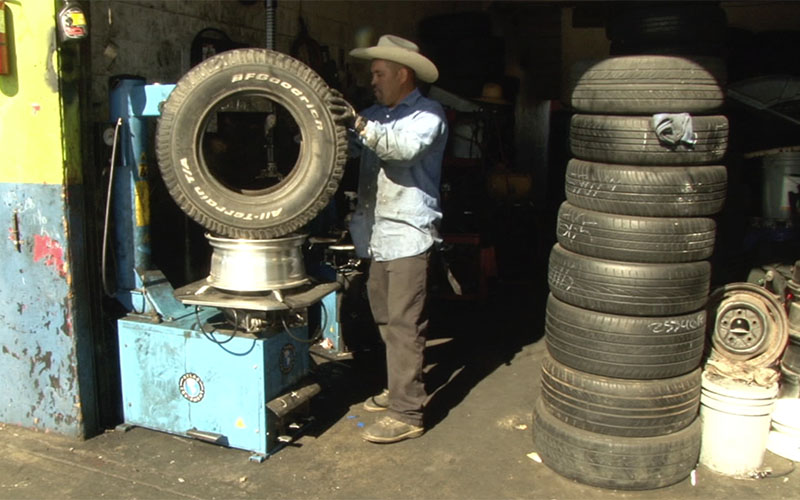 A tire technician removing a tire from the rim for replacement. (Photo by Yesenia Beltran/Cronkite News)

There are options for all customers, from factory-guaranteed new tires to used tires in several conditions, if patching is no longer an option. “New tire shops typically try to sell customers new tires, instead of patching it. With used shops, we’ll patch the tire if the customer wants, as long as it passes guidelines,” said Byrda.

Most tiny tire shops rely on word of mouth to get customers looking to repair or replace their tires. At Mil Amores, the manager said 60 percent of the customers are African-American and the rest are Latino. “It’s close to me, and I’ve heard good words about it. I’ve came here before, several times, and they’ve treated me real good,” said Anita Sanchez, a customer since 2008. Sanchez was buying a new tire.

While many want to repair their old tires, sometimes replacing a tire is the best option. “Safety is our priority,” said Chacon.

Used tire shops cater to customers on a budget, especially during holidays. “Most people can’t afford new tires. They prefer to pay $200 for a set of four (used) tires, than $600,” said Byrda.