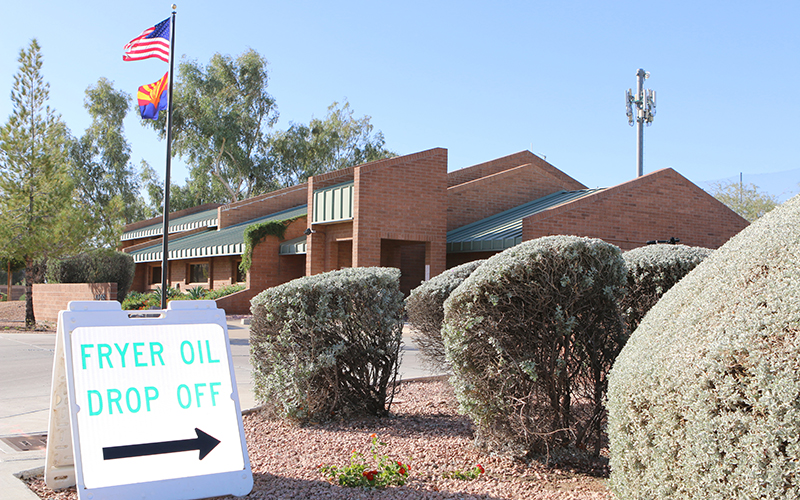 MESA – As Thanksgiving inches closer, pounds of cold poultry await a crispy ending in the family fryer. After devouring the holiday feast, it’s time to turn to the leftovers.

We’re talking turkey grease. Yes, the rather unappetizing remnants left for those who have decided to deep fry, rather than roast, a turkey. Recycle by pouring that used cooking oil into a receptacle at a Mesa fire station, and return to chow down on more appetizing Thanksgiving leftovers with a clear conscience.

Mesa fire and medical officials ask people to come to fire stations rather than pouring used oil down the kitchen sink. It will only block the drain. Throw it away, you say? Tossing the oil in the garbage fills landfills, and burying it outside pollutes soil and groundwater.

“Pouring cooking or fryer oils, especially in large amounts, down the drain can cause a really big and nasty problem, something that you don’t want to deal with on the Thanksgiving holiday for sure,” Macdonald said. “What happens is that oil and grease collect in the sewer pipes and actually congeal,” she said.

But turkey grease can be recycled into livestock feed, lubricants and clean-burning biofuel, according to the website of recycling company Baker Commodities Inc.

“They, at no charge to the city, take that oil and recycle it into various products,” Macdonald said. An estimated 700 gallons are expected to be collected during the holiday season.

“If people are frying a turkey for Thanksgiving, they can come down to one of four fire stations around the city and recycle that oil,” Macdonald said.

Pour the oil into a receptacle similar to a giant, metal garbage bin, and Baker Commodities will pick up the oil and process it into a new – you guessed it – commodity. (It’s not just for the holidays, or for turkey grease. Used cooking oil can be brought to the stations year round.)

What if you don’t fry your turkey in Mesa? Well, Mesa officials accept any turkey grease, regardless of its original location, at any of these fire stations:

“It’s really easy, you don’t have to talk to anyone or anything,” said Logan Marx, a firefighter with Mesa Fire and Medical Department. “Just show up, put it in, and you’re off, on your way.”

Dropping off turkey grease or other used cooking oil:
• Make sure oil is completely cooled, and can be transported in any container.
• Signs on the street near a Mesa fire station direct you to the bins.
• Recycling bins are in the parking lot of a fire station.
• The bin is labeled “Cooking oil.”
• Open the bin flap and pour in cooled oil. Hold your nose; it smells.