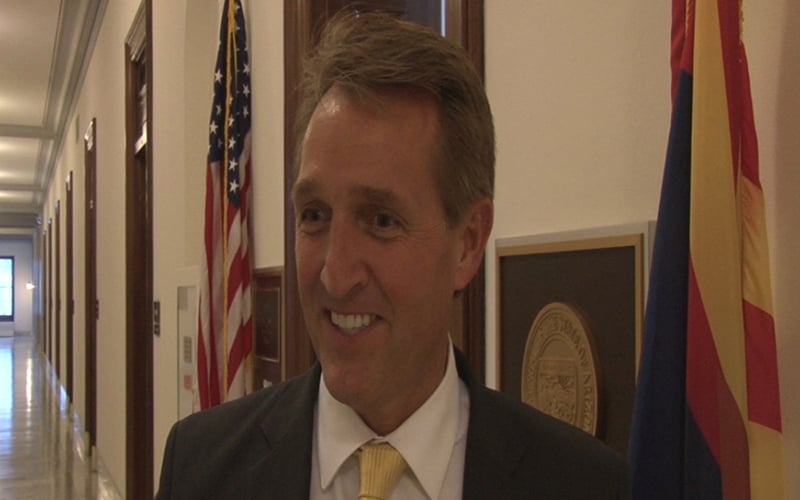 Sen. Jeff Flake, R-Arizona, said lifting a House ban on budget earmarks is like “feeding pork to the alligators” at a time when voters want to “drain the swamp” in Washington. (Photo by Claire Caulfield/Cronkite News)

WASHINGTON – The House Republican Caucus sidestepped a proposal Wednesday that would have lifted a five-year-old ban on congressional earmarks, the special local “pork barrel” projects that can be slipped into budget bills with little public notice.

Backers of the proposal said they withdrew the measure before it could come up for a vote in the caucus meeting after Speaker Paul Ryan vowed to set up a system allowing “directed congressional spending” that would still give taxpayers confidence their tax dollars were not being wasted on pork.

But opponents like Sen. Jeff Flake, R-Arizona, said that instead of lifting the ban, Congress should be working to “immediately pass legislation to make the ban on earmarks a permanent statutory prohibition.”

“When people are trying to bring it back I say, ‘Why?’ If we’re trying to drain the swamp, you don’t feed pork to the alligators,” said Flake, who helped put the ban in place in 2011 when he was in the House.

Republican Reps. John Culberson of Texas, Tom Rooney of Florida and Mike Rogers of Alabama had proposed the amendment that would have allowed earmarks with specific conditions. The earmarks would have to be approved in committee, the sponsors would have to be identified, the money could not go to museums, parks or recreational facilities, and the earmarks could not increase overall federal spending, among other restrictions.

But the three pulled the proposal after Ryan promised to come up with a “transparent and accountable process to restore Congress’ constitutional spending authority by the end of the first quarter of 2017,” Culberson said in an emailed statement.

“We are confident we can develop a method to handle directed congressional spending in a way that gives constituents confidence that their hard-earned tax dollars are being spent effectively,” Culberson’s statement said.

But Flake said of the earmark process that “the problem is it just gets out of control.”

“The first six years I was here, we were earmarking rampantly,” Flake said. He said part of the problem was that “Republicans controlled the House, the Senate and the White House for most of that time and so what happened just kept exploding because there was no break on the system.”

Flake, who took to the floor of the Senate Tuesday to defend the earmarks ban, said pork-barrel spending is corrupting because it allows “committee chairman and others to pass out favors.”

“Particularly the appeal of being able to tell a constituent or company in your district or a municipality that, ‘Hey, we got this money and it’s just for you,’ that’s pretty strong,” he said. “A couple of our colleagues ended up in jail because of the corrupting nature of earmarks exchanged for campaign contributions, or money under the table. It’s just not a good system.”

And he said earmarks also make it difficult to rein in spending, “because once you had an earmark in a bill you didn’t dare oppose that bill or your earmarks might get stripped.”

“So the bills just kept getting bigger and bigger – it’s one of the reasons we have as big a debt as we have,” Flake said.