After President-elect Donald Trump spoke with Russian President Vladimir Putin about working to improve relations, Sen. John McCain, R-Arizona, warned that the U.S. needs to be cautious when dealing with the Russian president. (Photo by Claire Caulfield/Cronkite News) 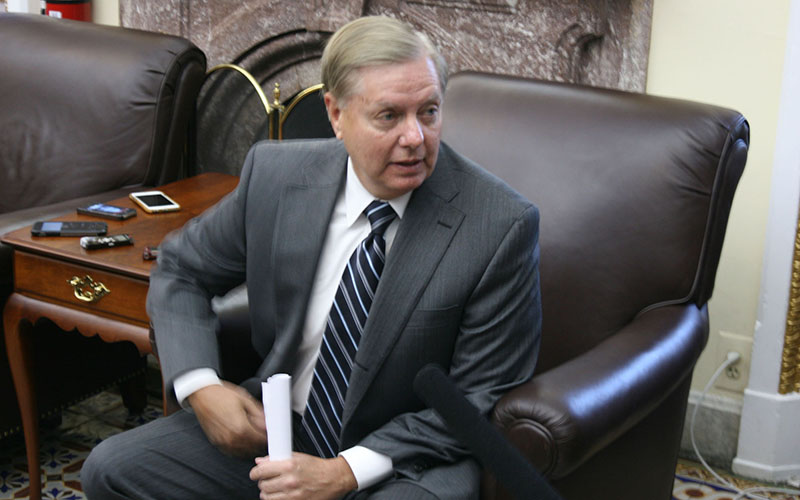 Sen. Lindsey Graham, R-South Carolina, echoed Arizona Sen. John McCain’s concerns about what he sees as the dangers of cooperating with Russia and Russian President Vladimir Putin, calling for hearings into Russia’s “misadventures” in other countries. (Photo by Allie Bice/Cronkite News)

WASHINGTON – Sen. John McCain, R-Arizona, issued a stern warning Tuesday against smoothing relations with Russia, one day after President-elect Donald Trump and Russian President Vladimir Putin agreed that the two countries need to do just that.

McCain did not mention Trump by name in a statement released by his office, noting only Putin’s overtures “with the U.S. presidential transition underway.” But he warned that another “reset” of relations would make the U.S. complicit in Russia’s “butchery of the Syrian people,” among other crimes.

“When America has been at its greatest, it is when we have stood on the side those fighting tyranny,” said the statement from McCain, who is chairman of the Senate Armed Services Committee. “That is where we must stand again.”

The statement came on the heels of a Russian statement outlining a Monday phone call in which Putin congratulated Trump and said he wanted to begin a partnership based on “equality, mutual respect and non-interference in each other’s domestic affairs.”

It went on to say the two men “agreed on the absolutely unsatisfactory state of bilateral relations” and the need to improve them.

An adviser to the Trump transition team, Army Lt. Gen. Joseph Keith Kellogg, defended discussions with Russia about improved relations. While Kellogg said he was not speaking for the transition team, he said “it’s an appropriate way that world leaders talk. So I think it’s great.”

“They’re a global nuclear power and you need to have good relations with them,” Kellogg said, according to a press pool report from Trump Tower in New York.

Trump said several times during the campaign that he admired Putin for his strong leadership – sparking an outcry from critics who noted Russian incursions in Ukraine, Georgia and Syria, and oppression of domestic groups.

McCain isn’t the only senator with deep reservations about a “reset” on relations with Russia. Sen. Lindsey Graham, R-South Carolina, called this “a defining moment for the country.”

“I want a good relationship with Russia, but things have to substantially change,” said Graham, an ally of McCain’s and the chairman of a Senate Appropriations subcommittee on foreign operations.

Graham, who mounted an unsuccessful run for the GOP presidential nomination this year, said it is up to Trump as commander-in-chief to establish better relations with Russia, but added that “Congress has a role in all this.”

“He is the leading diplomat to the country, but Congress has a role,” he said.

“When it comes to all things Russia, I am going to be kind of hard-ass,” Graham said, calling for a series of hearings “about Russia’s misadventures throughout the world.”

McCain said the U.S. should continue to question Putin’s intentions given his history.

“We should place as much faith in such statements as any other made by a former KGB agent who has plunged his country into tyranny, murdered his political opponents, invaded his neighbors, threatened America’s allies, and attempted to undermine America’s elections,” McCain’s statement said.