Rep. Trent Franks, R-Glendale, said the House Republican Caucus’ unanimous re-election of its leadership team reflected the success of the 2016 campaign and the trust of caucus members. (Photo by Jessica Suerth/Cronkite News) 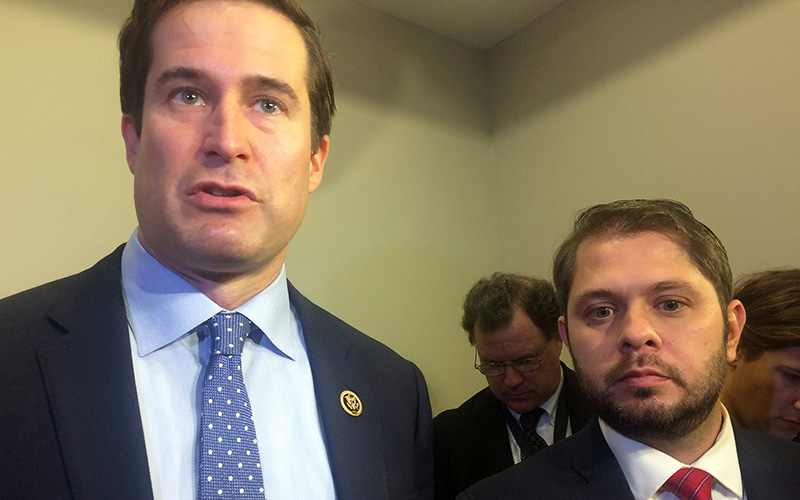 WASHINGTON – House Republicans capped a tumultuous campaign season by unanimously re-electing their leadership team Tuesday, while Democrats delayed their vote to give them time to figure out how to move forward following a disastrous election.

Rep. Ruben Gallego, D-Phoenix, was among dozens of Democrats calling for the delay this week, saying it would send a message that they want to “be an effective caucus and make sure Donald Trump is a one-term president.”

Gallego emphasized that the rank-and-file do not want to oust House Minority Leader Nancy Pelosi. He said he would be satisfied with “the same leadership, as long as they understand what the purpose of the leadership is and where it’s coming from and what it’s supposed to do.”

“I think a lot of us will feel more comfortable,” Gallego said.

But Republicans felt plenty comfortable with their current leaders, said Rep. Trent Franks, R-Glendale, despite a contentious campaign that was frequently marked by intraparty sniping.

After the campaign ended with a Republican in the White House and party control of both houses of Congress, the House GOP unanimously re-elected House Speaker Paul Ryan and his leadership team Tuesday.

“I think it is also a clear expression on the part of Republican leadership across the board that we are grateful to the American people for giving us another chance and we hope that we do not blow it,” Franks said, adding that the unanimous vote shows party unity that voters can coalesce behind in the future.

House Republicans were reveling Tuesday in the upset win by President-elect Donald Trump, with each member of the caucus getting one of Trump’s iconic “Make America Great Again” hats before their meeting. No members were seen wearing the hats after the meeting, however.

Ryan, who distanced himself from Trump during the campaign, touted the party’s determination to work with the incoming president to “fix America’s pressing problems.”

“This is something we are ready to do,” Ryan said Tuesday morning, saying lawmakers will respond by “confronting America’s problems and fixing them so that all of our citizens are better off.”

Franks said he predicted before the election that Trump and Ryan would “go forward and do great things for the country” and he believes that prediction is about to come true.

The House Democrats’ agreement to postpone elections from this Thursday until Nov. 30 was a consensus decision, according to members who spoke after the caucus meeting.

Pelosi told reporters Tuesday morning that she did not expect to face a challenger for her seat. And most caucus members said they expect her to be re-elected, even after coming off a bitter loss in last week’s elections.

“Mrs. Pelosi has a great amount of respect and support within the Democratic Party and this is no reflection on her leadership at all,” Rep. G.K. Butterfield, D-North Carolina, said of the delayed vote. “We just got a shellacking, we got an unexpected defeat and we got to regroup and decide how to go forward.”

He compared it to the “different stages of grief you go through” after a death.

“We have to deal with the results, we have to get a lesson learned, we have to see what went right, what went wrong and how we can better get out a Democratic message,” Butterfield said.