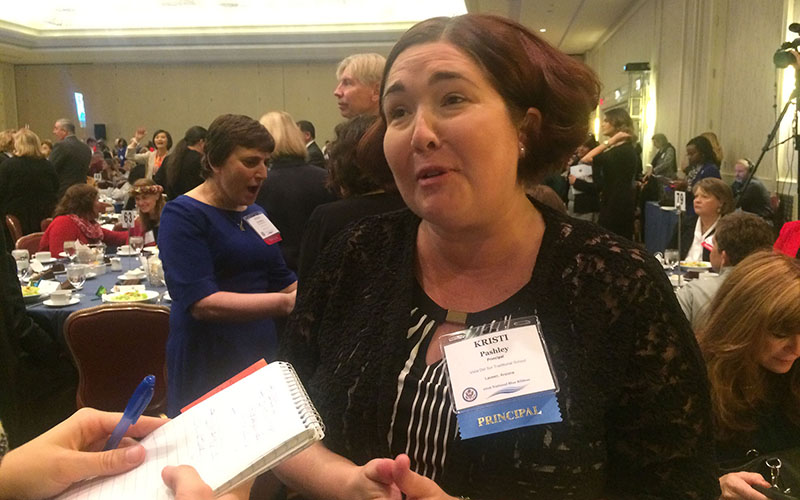 Kirsti Pashley, former principal at Vista del Sur Traditional School in Laveen, said the Blue Ribbon School designation was an honor for “our staff, our students and our community.” (Photo by Jessica Suerth/Cronkite News) 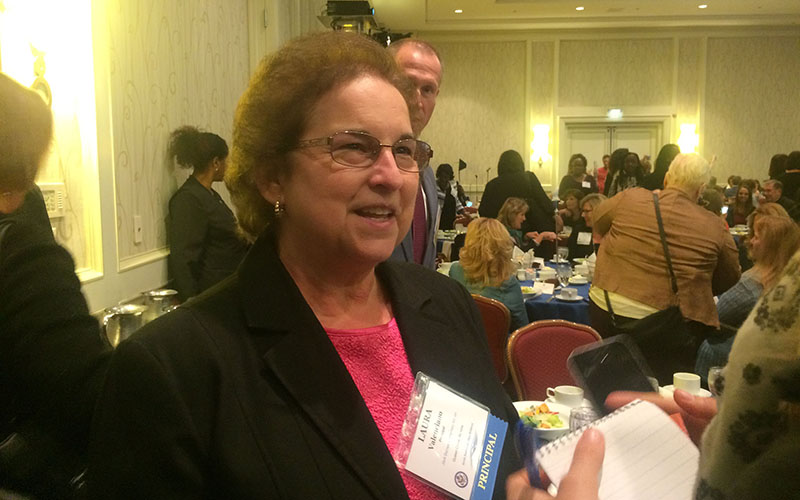 WASHINGTON – It was exciting for Arizona educator Kristi Pashley to be in the nation’s capital on Election Day – but not for the reasons you might think.

Pashley was in Washington to represent Vista del Sur Traditional School in Laveen, one of four Arizona schools that were recognized Tuesday by the Department of Education as 2016 National Blue Ribbon Schools.

The other schools were Jack Barnes Elementary School in Queen Creek, University High School in Tucson and Fuller Elementary School in Tempe. They were among the 329 public and private schools nationwide that were named in September for their overall academic excellence, including high academic performance and efforts to close achievement gaps among student groups.

Education Secretary John King Jr. said they are “proof that we can prepare every child for college and meaningful careers,” in a video statement announcing the schools.

“Your schools are on the cutting edge, pioneering innovative educational practices – professional learning communities, project-based learning, social and emotional learning, positive behavior systems – making you shining examples for your communities, your state and the nation,” King said in the statement.

So while the rest of the nation was focused on the elections Tuesday, the school officials were being recognized by the Department of Education.

Jack Barnes Elementary School Principal Laura Valenciano said at the ceremony that educators from her school were “very excited to be here and very proud to have been selected and recognized as a Blue Ribbon School.”

Jack Barnes Elementary was recognized for maintaining exemplary academic performance from students, according to the department.

Schools are nominated for the National Blue Ribbon award by their state’s department of education. The nominated schools then complete an application about their practices in which they can apply to be recognized as an exemplary high-performing school or as one of the leading schools in their state for the fastest progress in closing student achievement gaps.

The four Arizona schools honored this year follow 12 in the state that had been recognized previously. In its 34th year, the blue ribbon has been granted to 8,500 schools across the nation.

Pashley, the former principal at Vista Del Sur, said Tuesday at the award ceremony that she was honored to see the school’s work acknowledged at a national level.

“Our staff, our students and our community worked so hard for this,” Pashley said. “So to be recognized at a national level is amazing. It’s pretty amazing that little Laveen is here, we worked so hard.”

But the Arizona educators said they were also excited to be in Washington on Election Day, and planned to stick around for election night.

Valenciano, who was in the city for the first time, said she was going to make her way toward the White House for the evening.

“It’s exciting to be in D.C., period,” Valenciano said. “But it’s certainly something else to be here on Election Day.”

Pashley said it “surreal to be here during election time,” but didn’t let that keep her from voting.

“It’s a unique experience,” Pashley said. “I made sure I did my early ballot.”