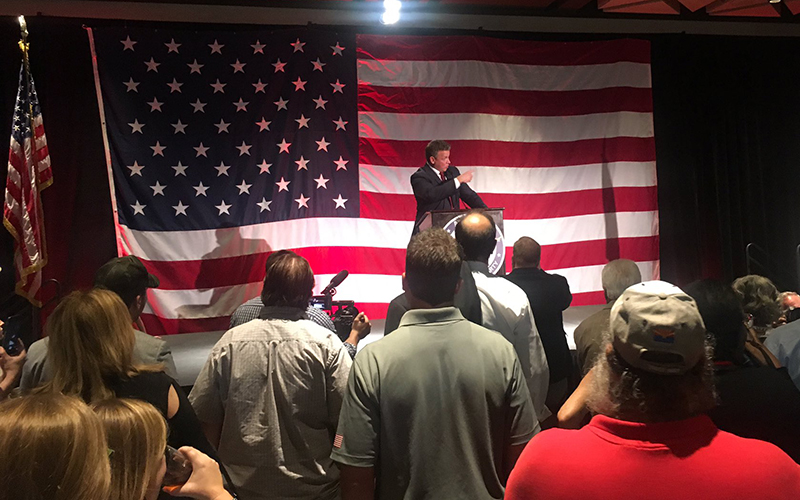 The Associated Press and Washington Post declared Trump the winner at about 12:30 a.m. MST with a handful of electoral college votes to be awarded. He was able to sweep key states such as Florida, Ohio and Pennsylvania, while breaking through in states like Michigan and Wisconsin.

Democrat Hillary Clinton’s campaign said she would not make a speech until Wednesday morning, but there were reports that she had called Trump to congratulate him.

In Arizona, a state once thought to be a potential swing state, Trump was leading Clinton by four percentage points with 80 percent of the vote counted.

“This is a change election,” said Douglas Cole, a Republican strategist and the senior vice president of Phoenix-based HighGround Public Affairs Consultants. “It’s a tsunami across the country. People are voting for real change.”

“We’ve had a great ground game, we’ve had tremendous field teams, we’ve made millions of phone calls, raised a bunch of money and we’ve done what it takes to actually get the ground to vote,” Arizona Republican Party chairman Robert Graham said.

A month before the election, Clinton too accelerated efforts to sway Latino voters in the state. Campaign manager Robby Mook announced that $2 million would be spent in Arizona. First Lady Michelle Obama, Chelsea Clinton and Bernie Sanders all made stops in Maricopa County ahead of Clinton herself. Despite an unprecedented effort in the state to register Latinos to vote, Arizona’s conservative base still managed to command a Trump win.

“It just wasn’t meant to be,” said Mario Diaz, president of Mario E. Diaz & Associates and a Democratic political strategist. “It sure is much tighter than it should have been.”

Republican U.S. Sen. John McCain also was re-elected, defeating Democrat Ann Kirkpatrick, to keep the seat he has held since 1986.

“I’ve never taken it for granted, and I never will,” McCain said in his acceptance speech at a party in downtown Phoenix.

In one of the most dramatic rebukes of a long-time Arizona Republican, Maricopa County Sheriff Joe Arpaio lost his bid for reelection Tuesday to Democrat Paul Penzone. Federal prosecutors last month charged the self-described “toughest sheriff” in America with criminal contempt of court, accusing him of ignoring a judge’s order in a racial profiling case. That case is still ongoing.

Arpaio could not be reached for comment. Like Trump, he took a hard line in his stance against undocumented immigrants, supporting tighter security at the border. At this year’s GOP convention, a cheering crowd chanted “build that wall!” as Arpaio threw his support to Trump.

Data from Catalist shows that four days before the election, 13 percent of early ballots cast in Arizona were from Latino voters. In 2012 at the same point, that number was at 11 percent, up from 8 percent in 2008.

Latino voters typically flock to Democrats and Trump’s anti-immigration rhetoric was especially divisive for Hispanic voters. During a Trump rally in September in Phoenix, the Republican vowed that “there will be no amnesty” for undocumented immigrants in the state.

Arizona is the fifth largest eligible Hispanic voter population in the United States, according to data from Pew Research Center. A spokesman from Promise Arizona reported that grassroots organizations, most of which are focused on Latino and immigrant issues, registered 150,000 new voters alone in 2016. From 2010 to 2015, the groups registered 110,000 new voters.

“That doesn’t mean that this trend of the increasing Latino political clout doesn’t continue,” he said. “It will continue.”

In the months leading to Election Day, both campaigns worked to deflect scandal and outrage from voters. For Trump, accusations of sexual assault and a video in which he made lewd comments about women bedeviled his pitch to voters. He strongly denied the accusations.

“I’ve never seen anything quite like the degree of disrespect, foul language, bad manners, my children – I have six children – I would punish them were they to say or do some of the things that the Republican candidate has said and done,” said Carolyn Warner, a Democratic National Committeewoman and former Arizona Superintendent of Public Instruction.

Clinton’s campaign was once again confronted with the specter of a continuing email scandal when FBI director James Comey informed Congress the agency discovered more emails related to her private server. Just two days before Election Day, Comey re-asserted his recommendation that Clinton should not face charges.

“Hillary’s got a long history in politics, almost 35 years, and we have watched her from when she was in Arkansas and the Clinton M.O. just simply hasn’t changed,” she said. “They don’t tell the truth. She is very self-serving.”

With chants of “lock her up” from the crowd, Arizona’s Republican party leaders celebrated Tuesday night at the Hyatt Regency in downtown Phoenix.

“This is exciting for Arizona because Arizona actually matters and we’re not used to that in Arizona,” Michele Reagan, the state’s Republican secretary of state, said.