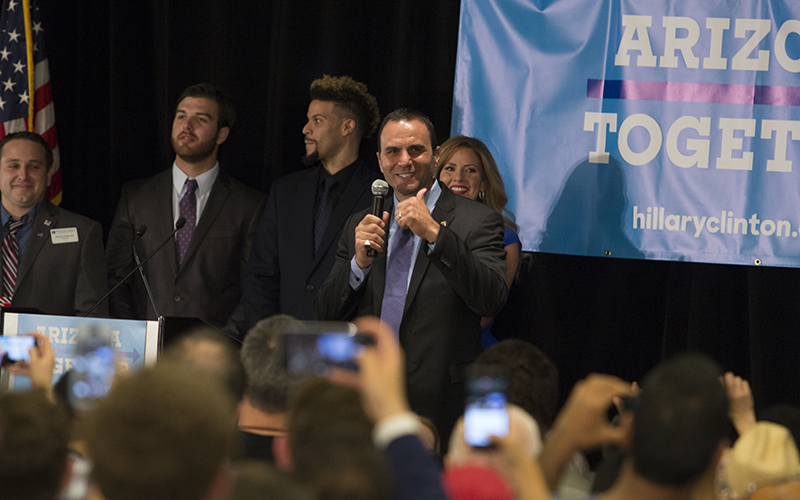 “There’s a new Sheriff in town,” someone yells from the crowd gathered at the Democratic watch party. Paul Penzone will replace Joe Arpaio as Sheriff of Maricopa County. (Photo by: Ally Carr/Cronkite News) 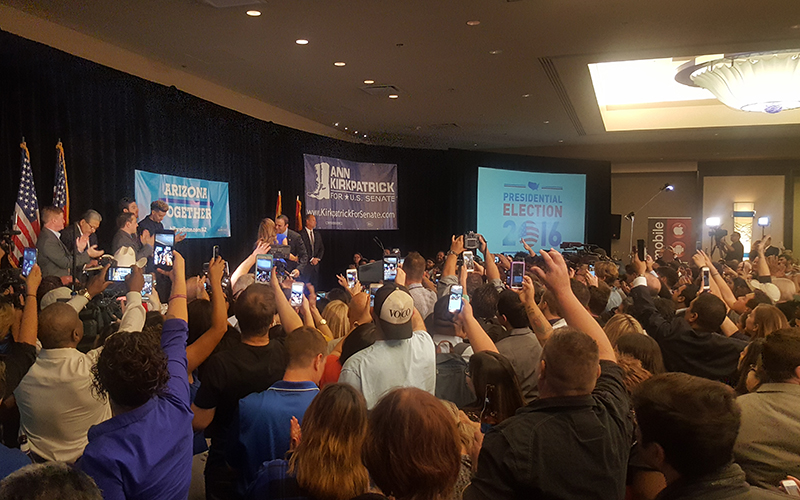 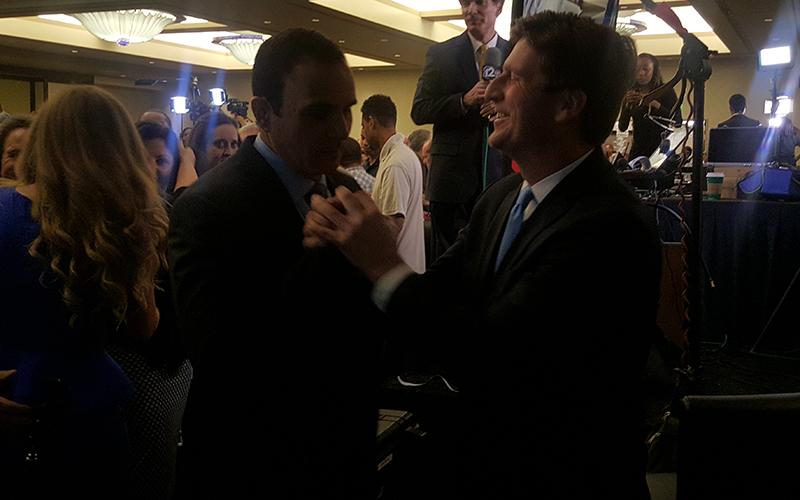 It appears like a stunning defeat for a Republican sheriff who has enjoyed both local and national popularity – and notoriety – for years. Controversy has plagued Arpaio in recent months, especially after federal prosecutors filed criminal contempt of court charges against him, and the county added more than $13 million to the budget to comply with a federal order stemming from a racial profiling lawsuit.

“It’s been a long time, but it’s so important to get rid of Sheriff Joe because he put a veil over our politics, a dark veil over our politics,” Phoenix Mayor Greg Stanton said Tuesday night. “We are a community that wants to be united, not divided. And he brought such a bad reputation nationally and internationally. It’s time for Arpaio to go, and today is a great day, a great day for all of Arizona.”

“You’re going to have a professional law person in charge of the Sheriff’s Office. That’s great.”

Arpaio released a statement Tuesday night, calling it an “honor and a privilege to serve the people as Sheriff of Maricopa County for the last 24 years.”

“Tonight, the people have spoken,” the statement said. “And while Ava and I are disappointed in the results we respect their decision.”

Tuesday’s win means Penzone, a former Phoenix police sergeant, will take the helm as the top law enforcement officer in Maricopa County, the state’s largest county. He will oversee a budget of about $360 million, about 3,300 employees and one of the nation’s largest jail systems.

Petra Falcon, executive director of Promise Arizona, said the Penzone victory comes as no surprise to her. The crowd of people watching the election night coverage burst into applause when she announced that Arpaio had lost.

“He continued to take advantage of his power and, of course, he found himself in the court system, where the court system addressed his abuse. Now the voters also made a decision today that he didn’t deserve to be sheriff,” Falcon said. “It’s going to be justice for the Latino community, especially for immigrants who suffered under his reign of terror.”

“Because of this apparent victory for Latinos in the sheriff’s race, that just empowers future Latino voters,” Garcia said, adding that in contrast to their parents, most Latinos under 18 were born in the U.S. and will be eligible to vote.

Max King, 21, said she voted for Penzone on Election Day. Her family supports Arpaio, who has held the office longer than anyone else in Maricopa County history.

“They worship the ground Joe Arpaio walks on,” she said. “There are other issues being ignored. He’s almost on a witch hunt for illegal immigrants.”

She said she saw her choice Tuesday more as a vote against Arpaio than as a vote for Penzone.

She said she hopes immigration law can be reformed to make it easier for immigrants to apply for visas and for families to stay together.

James Garcia, a spokesman for Promise Arizona, said he noticed Arpaio becoming more vulnerable this year than he had been in past elections. The nonprofit organization has participated in voter registration and get-out-the-vote efforts this year and is part of the One Arizona coalition, which said it registered 150,000 Latino voters.

“Sheriff Arpaio has proved again and again he’s bad news for our community, and if we can play a role in stopping him, then we’re going to do that,” Garcia said.

Some decisions drew international attention. But they also drew ire from humanitarian organizations.

Inmates housed in Tent City receive two meals a day, with an average cost per meal of between 15 and 40 cents – the cheapest in the nation, according to Ballotpedia.

But after years of controversial actions and lawsuits, some critics had enough.

Activists started the Bazta Arpaio movement this year in the Phoenix area to get Arpaio “fired” and oust the sheriff. In Spanish, basta means “enough.”

Yet, Arpaio also has a strong following. His name recognition rivals Arizona’s most prominent politicians.

Arpaio raised more than $12 million during his campaign, and as of the most recent filing in September, had $1.2 million cash in hand. In comparison, Penzone had raised $540,000 as of Sept. 19.

A negative attack ad by the Arpaio campaign accusing Penzone of assaulting his ex-wife led Penzone to file a defamation lawsuit against the controversial sheriff in late September, according to azcentral. In the lawsuit, Penzone claims that Arpaio “resorted to blatant lies to smear Penzone’s reputation and bolster Arpaio’s re-election bid.”

Both sides of the campaign have been negative, as Arpaio’s detractors also sought to dirty the sheriff’s reputation. Maricopa Strong, a group funded by billionaire George Soros, spent $2 million on attack ads directed at Arpaio. The Elect Sheriff Joe Arpaio campaign filed a complaint against the group with Maricopa County. The ads criticize Arpaio for spending taxpayer money on lawsuits and not investigating some sex crimes or serving warrants, according to azcentral.

Arpaio worked with the U.S. Drug Enforcement Administration before serving as sheriff, according to the Maricopa County Sheriff’s Office. He grew up in Springfield, Mass.

Penzone was born in Trenton, New Jersey, but has lived in Arizona since the 1970s. He started working for the Phoenix Police Department in 1988 and managed the Silent Witness program for seven years.

His campaign advocates for reform. Penzone claims he will improve Tent City, calling conditions there unsafe for both officers and inmates, and he plans to address racial profiling.

However, he pledges to continue the sheriff’s posse, volunteers who help the office.