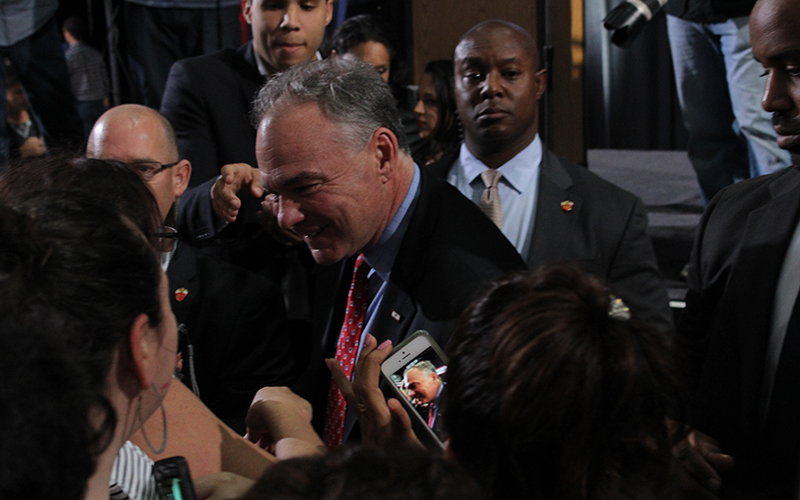 With those words, Democratic vice presidential pick Tim Kaine delivered the second half of a two-part bid to bring Hispanic voters into the Democratic fold, talking to Arizona Latinos in Spanish about Hispanics’ rich history and currency in the United States. His speech came a day after presidential candidate Hillary Clinton spoke in Tempe.

Kaine spoke Thursday about the country’s roots in Asia, Africa and Ireland, that the Hispanic community has been part of America for centuries, well before the British landed in North America, and said “Spanish was the first European language spoken in this country.”

“Latinos have always shaped this country,” Kaine said, “from your service in the military, to your spirit of entrepreneurship, to your presence on the Supreme Court.”

“With so much at stake for the Hispanic community, it just makes sense to make the case for our campaign in a language that’s spoken by so many families across the country,” Kaine said in his Maryvale speech.

“‘Vamos a votar’: Let’s go vote,” said Kaine, a Virginia senator. He said what is at stake in Tuesday’s election is Clinton’s vision of inclusiveness against Republican Donald Trump’s “divisive vision for our country.”

Even as Latino voter registration and early voting climbs, allegiance to the Democratic or Republican Party is not a given. A 2015 study of Arizona Latino voters’ attitudes showed 41 percent of Arizona Latinos were registered to vote as independents and would vote for the best candidate, regardless of party.

“Everything he said sounds great to me but we want action,” Rita, 44, said in Spanish. “I am tired of politicians playing with our feelings.”

And, as with voters of other backgrounds and ethnicities, going to the polls is not guaranteed.

College student Erin Lundsford, 22, said before listening to Kaine’s speech that he could spur Latinos to vote.

“I feel like their voices aren’t heard,” Lundsford said.

Kaine spoke to nearly 500 people about a Clinton administration that would create good jobs and educational opportunities at a community center in Maryvale, a majority Hispanic area in west Phoenix that was the city’s first master-planned community.

“Latinos are 17 percent of our country’s population, but they hold only 2 percent of its wealth. That’s just not right,” Kaine said.

“I love the education reform to help families of low-income,” Phoenix resident Iliana Pacheco, 41, said in Spanish. “This is what we need to come together.”

Phoenix resident Maria Yañes, 29, said in Spanish before Kaine’s speech that his deciding to deliver his remarks in Spanish made sense.

“It is very important because it means they take into account the Latino families,” Yañes said.

Latinos are leaning 4-1 against Trump, meaning whether the state tips toward red or blue could be decided by a 2 or 3 percent difference, according to azcentral.com.

Trump and Clinton, along with their surrogates, have alternated visits to Arizona as the Tuesday election nears.

Donald Trump Jr. worked to persuade millennials on the ASU campus in Tempe last week and will return on Friday.

Sanders is expected to return to the Valley on Sunday. So far, that is the last scheduled Arizona appearance for people stumping for Clinton or Trump.