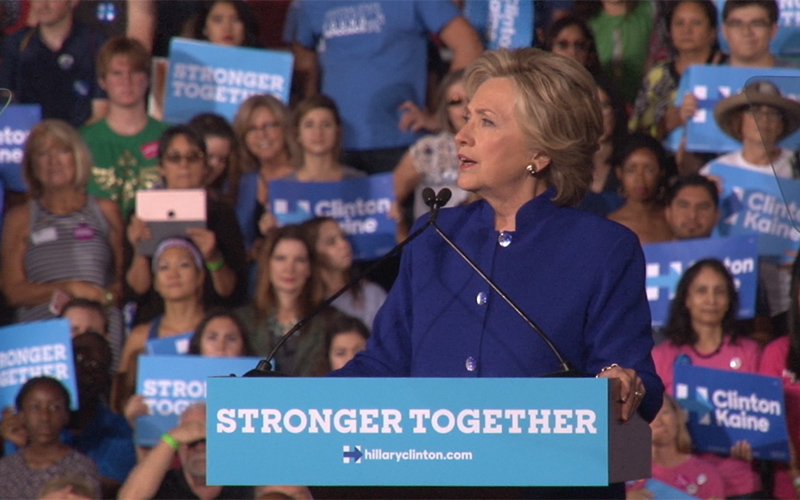 Hillary Clinton addresses a crowd at a rally on Arizona State University’s Tempe campus six days before Election Day. Clinton told the crowd, “It is in your hands.” (Photo by Katie Bieri/Cronkite News)

“We’re going to get the economy working for everybody, not just those at the top,” Clinton said, adding she wants to check off a list of things to do as president: create “clean, renewable energy jobs,” grow small business, provide free college for “millions” and ensure equal pay for women.

“This is not a women’s issue, this is a family issue, an economic issue,” Clinton told a crowd at Arizona State University in Tempe. More than 10,000 people attended the rally.

She said she will fight for a national minimum wage, a nod to Arizona’s Proposition 206 that would raise gradually raise the minimum wage to $12 an hour by 2020.

Phoenix resident Francisco Chairez later said the most important issue Clinton touched on was the economy.

“She will make the wealthy pay their share,” Chairez said. “The Republican Party is a party for the wealthy, but Hillary’s for the people.”

Clinton slapped frequently at Republican candidate Donald Trump for much of her 45-minute speech. She repeated her belief Trump is “out of his depth” and too dangerous to be president.

“This state is in play for the first time in years,” Clinton said, reminding the crowd the last time Arizona chose a Democrat was 20 years ago when her husband was re-elected. “We have a chance to turn this state blue again.”

Clinton is courting Hispanics, a pain point for Republicans that brims with potential for Democrats. Virginia Senator Tim Kaine, Clinton’s running mate, is expected to deliver a policy speech in Spanish in Phoenix on Thursday. Clinton aides are billing it as the first speech entirely in Spanish delivered at a major campaign event.

Democrats want to leverage Trump’s pledge to build a wall on the U.S.-Mexico border and labeling Mexican immigrants as “criminals and rapists” into a block of votes that could carry Arizona into Democratic territory.

Contrary to Trump’s impression of the country, Clinton said, diversity is a strength that will help carry the country forward. She called the battle for Arizona’s 11 electoral votes “one of those make or break moments” for the U.S.

Clinton did not address the controversy over 33,000 emails on a private server while she was secretary of state. Trump has been hitting hard at the issue since FBI director James Comey a few days ago renewed the investigation, saying more emails were found on the computer of a Clinton aide and her estranged husband, former Congressman Anthony Weiner.

Giffords, who was shot and injured at a Tucson rally five years ago that left six others dead, has made gun reform a mission and said Clinton will stand against the gun lobby.

Clinton made a down-ticket bid for Arizona Democrats, ticking off Kirkpatrick, who is running for U.S. Senate against longtime Arizona Sen. John McCain, through Maricopa County sheriff. 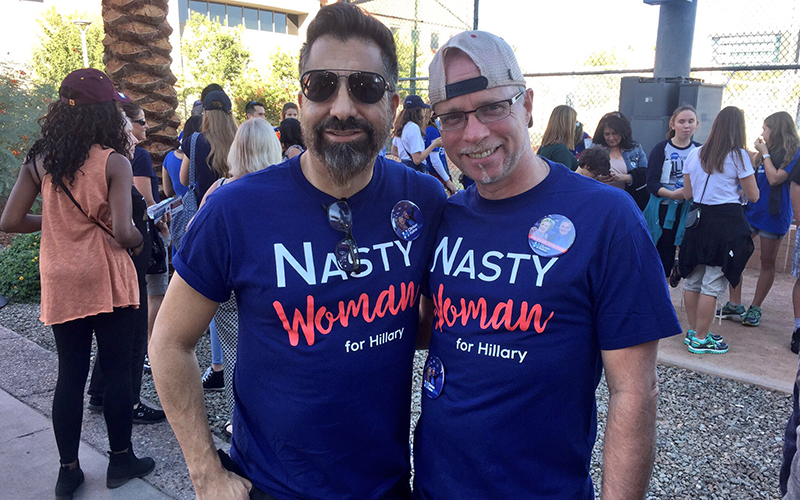 David Vance of Peoria, among the hundreds who lined up before the rally, said, “All of her scandals have been blown out of proportion, just conspiracy theories.

“There’s never been any evidence or she wouldn’t be where she is right now,” Vance said.

Kristi Blade of Glendale brought her daughters Julia, 14, and Olivia, 16, so they could “watch and learn from a strong woman like Hillary.”

Clinton hasn’t been to Arizona since March, focusing in recent weeks on more traditionally battleground states like Florida and Ohio.

Republican opponent Donald Trump made his seventh Arizona appearance on Saturday. At his rally in Phoenix, Trump hit on the reopened FBI investigation into Clinton’s private email server and the rising costs of the Affordable Care Act.

His vice presidential choice, Indiana Gov. Mike Pence, spoke in Mesa Wednesday morning, hours before the Clinton appearance, in his fourth visit to the state. Trump’s son, Donald Trump Jr., will return to Arizona on Friday, a few days after his last visit.