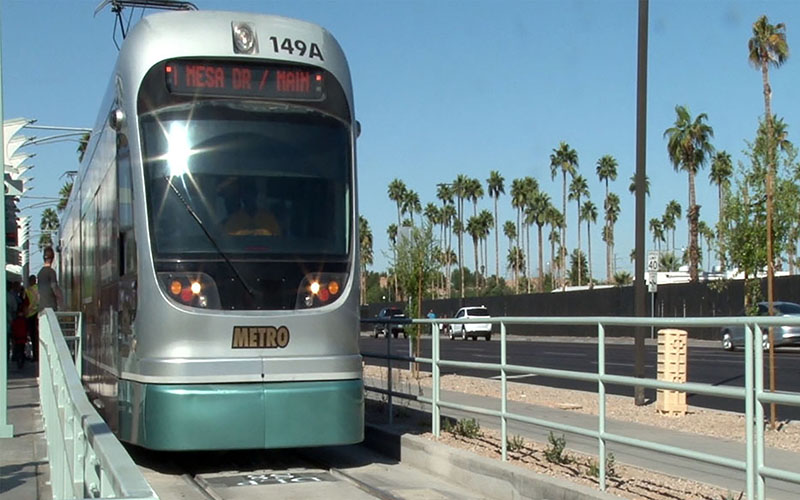 A train makes the inaugural run in March from Dunlap Station on an expanded leg of Valley Metro’s light rail. Improvements in Phoenix transit were cited as a model for other cities by advocates before the election. (Photo by Elena Mendoza/Cronkite News)

WASHINGTON – Phoenix was held out as a model for the nation during a conference call Wednesday by transit officials pushing for approval of about $200 billion in transit projects on local ballots across the country next week.

Mayor Greg Stanton, on the call organized by the Center for Transportation Excellence and the American Public Transportation Association, talked about the city’s passage last year of an increase in the sales tax to fund transit, and the importance of such projects to the life of a city.

“In my experience, people don’t mind spending taxpayer money as long as they don’t believe the money is going to be wasted,” Stanton said during the call.

The call was aimed at boosting support for 49 different ballot measures that would fund roughly $200 billion in transit projects in 25 states, including Flagstaff’s Proposition 411 to continue collection of a sales tax funding the Mountain Line bus service.

Tuesday’s ballot questions are part of the 77 total that were put before voters this year, the call’s organizers said.

“This is truly a historic figure that could … help transform communities across the country,” said Richard White, CEO of the American Public Transportation Association.

White claimed that the average commuter can save close to $10,000 a year switching from car to transit. For every dollar a community invests in transit, he said, it generates $4 in economic returns back to the city.

Jason Jordan, executive director of the Center for Transportation Excellence, agreed with White that “2016 is shaping to be a very significant and historic year” for transit issues on the ballot, and expressed confidence that they would win at polls.

“There is a longer track record for success,” said Jordan, who said that over the past 15 years, transit measures have had an overall success rate of 71 percent. He called those numbers “striking” in a time of political polarization on tax and spending issues.

Stanton – whom Jordan introduced as the mayor of a city whose transit system has done exceedingly well in all aspects – said transit ballot measures are becoming increasingly popular “because people love public transportation.”

That was one of the reasons for the success last year of Proposition 104 in Phoenix, he said, which expanded and extended a transit-dedicated sales tax for the next 35 years. The measure will be used to fund an estimate $31.5 billion in light-rail expansion, bus services, bike systems and street improvements and other projects over the 35 years.

“People are willing to put money in long-term good investment projects,” Stanton said. “We embrace the fact that we need to be a little more independent.”

Stanton said the opening of Valley Metro light rail in 2008 improved the quality of life in Phoenix and invested back into the city, and he praised voters for passing Prop 104 to continue improving services.

“Unless Los Angeles passes theirs, our investment will be the largest in the country,” Stanton said, referring to issues on that city’s ballot next week.

Stanton said ballot measures are another way for local residents to take control of their affairs.

“We need infrastructure investment, but if we wait … for Washington, D.C., it’s going to take a long time,” he said.