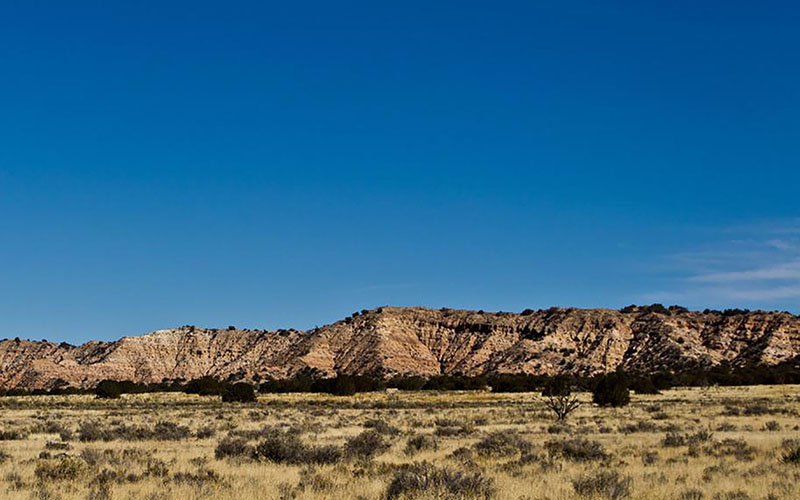 A panoramic view of lands on the Navajo Nation. Members of the tribe have received more than $104 million from the federal government for almost 150,000 acres of land that is being returned to the tribal government, part of a $1.9 billion land buyback program for tribes nationwide. (Photo by Bill Inman/Padres Mesa Ranch)

WASHINGTON – Arizona tribal members have received more than $175 million in the first four years of a federal program to buy back and consolidate parcels of land that are now split between multiple owners, the Interior Department said Tuesday.

The 2016 status report on the $1.9 billion buyback program said Navajo Nation individuals received more than $104 million, Gila River Tribe members got more than $51 million and members of the Salt River tribe were paid $20 million for their land.

“We’ve heard of new vehicles being purchased, houses being renovated, rooftops being replaced so it’s nice to hear about all of that,” said Larry Rodgers, executive director of the Eastern Navajo Land Commission.

But he and others said the benefit isn’t just for individual tribal members, but for entire tribes. Under the program, the tribes regain control of the lands that had been “fractionated” over years of passing from generation to generation and can use those consolidated lands for housing, community centers, agricultural or other projects.

“This program allows tribal governments to use consolidated land for the good of the nation,” said U.S. Deputy Secretary of the Interior Michael Connor as he released the report Tuesday.

The report said the federal government has spent $900 million of the $1.9 billion budgeted as part of a multibillion-dollar settlement in 2010 of claims that the government had mismanaged tribal assets for decades.

The land buyback program has resulted in the return of 1.7 million acres so far to 37 tribal governments across the country.

On the Navajo Nation, 149,524 acres have been returned, according to Interior. The Salt River tribal government has receive 1,064 acres and Gila River has had 194 acres returned.

The Navajo Nation is not the largest in terms of funds or acreage, but it does have the largest number of members participating in the buyback program at 10,579, “so the average person is getting about $9,000,” Rodgers said.

He said the Navajo Nation is looking forward to using consolidated land to streamline infrastructure projects.

“Because before if you wanted to build, say, a powerline, you had to get approval of at least 51 percent of the landowners just to run a line,” Rodgers said. “And when you have an area of land with 150 or more owners … that was often quite difficult for the power sponsors to do.”

While Connor said the program has been “very efficient and a great success,” he acknowledged that the settlement will not be able to consolidate all fractionated tribal land back to tribal governments.

“Land fractionation will continue to be an extremely difficult and complicated program … and about 4 million eligible acres will be left over after this fund is fully expended,” Connor said.

The Hopi and Tohono O’odham tribes have not received any funds yet, although they are on the list of 105 locations where the program is scheduled to offer buybacks before 2021.

The 2010 settlement also called for the creation of a scholarship fund for American Indians and Alaska Natives, “and we have contributed nearly $40 million to that fund,” Connor said.

“Every element of this project is about empowering tribal nations through self-governance,” Connor said. “Accelerated restoration of tribal homeland, water rights and educational sovereignty … so tribes can choose a future of their choosing.”