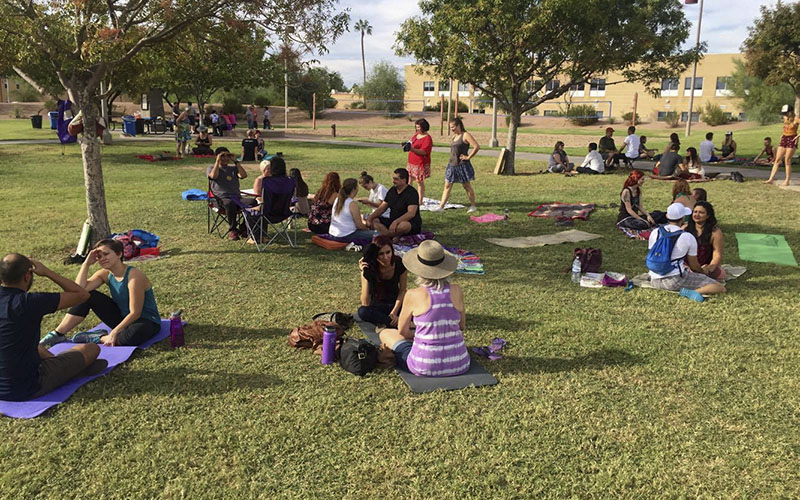 The two sat facing each other.

They stared into each other’s eyes for 60 seconds.

Next, Anderson, 49, smiled and hugged the man. He smiled back and walked away.

“It all feels very good to me,” she said.

Anderson, an administrative assistant, was one of about 200 people who participated in The World’s Biggest Eye Contact Experiment at Steele Indian School Park on Sunday afternoon. Phoenix was one of about 200 cities worldwide that participated in the event that aims to create a space for humans to connect in a ” socially conflicted, politically charged society,” the event’s website said.

In places like Port Lincoln, Australia, Galway, Ireland and in New Haven, Conn. total strangers met, connected and locked eyes for one minute.

This is the second time the World’s Biggest Eye Contact Experiment was held in Phoenix by Liberators International, a self-described social movement based in Perth, Australia and led by Peter Sharp. (Sharp did not respond to two emails from Cronkite News.) The group’s goal is to promote worldwide peace, love and connection by inviting people to sit and stare at each other for one unbroken minute, according to the website.

“We need it with all the politics and complete disconnect we have from fellow human beings,” she said.

The aim is to “alleviate” divisiveness, she said.

Henry Le, 33, quietly gazed into the eyes of a young woman. Le said he had long intended to practice meditation, but he couldn’t seem to get away from his phone.

This event would be the beginning of his meditation journey, he said.

“It’s a refreshing experience to look into someone’s eyes and feel centered, not just in yourself, but also balanced with that person,” Le said.

“It’s a worthy experience,” he said.